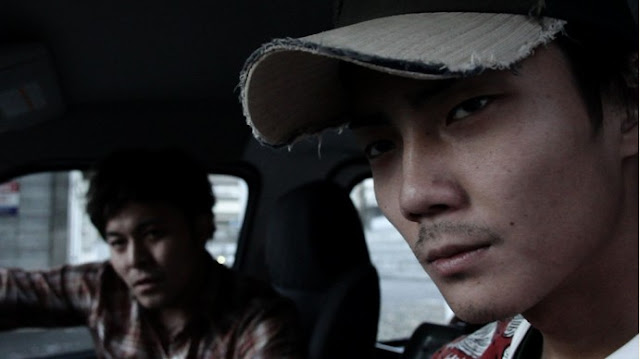 The gritty world of underground drug dealing is a tough, kill or be killed environment.  Ken and Kazu don’t talk to each other much as they sit in their vehicle, waiting for customers to tap on the window.  They keep things impersonal and pass the time playing shiritori – a word game where one person says a random word, then the next person takes the last syllable of that word and gives a new word using it as their first syllable.

Ken has heard rumours that Kazu wants to get out of the business and becomes suspicious of the fact that Kazu’s cell phone keeps ringing incessantly.  After a heated exchange, Kazu drops his touch guy demeanour to reveal that his mother is suffering from Alzheimer’s.   In this moment, we see a brief glimpse of humanity beneath Ken and Kazu's hard man exteriors.

Their relationship is soon put to the test when the boss man learns that someone has been cheating customers by stealing cocaine from each deal.  He has already had one of the suspects killed but decides to test Ken’s loyalty by bringing him in to kill the other person under suspicion: Kazu.  Ken is faced with the game changing decision of choosing to give his loyalty to his boss or to Kazu.

Ken and Kazu (ケンとカズ, 2011) is directed by Hiroshima born filmmaker Hiroshi Shoji (小路紘史, b. 1986), a graduate of the Tokyo Film Center School of Arts.   The film uses a lot of close ups and hand held shots which capture the claustrophobic tension between the men in the cab of the vehicle they use for dealing drugs.  A terrific little film that left me wanting to see more by this director.

This film screened at Japan Week, Frankfurt am Main on November 5, 2011.