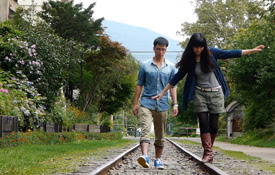 I guess the idiom “if pigs could fly” must have a different meaning in Chinese and Japanese.  A Chinese student Shu Yi is enjoying her last day in Sapporo, Hokkaido.  While touring the sites of the city (Odori Park, the TV tower, the Clock Tower) she ends up in the famed Tanuki Koji shopping arcade.  There she encounters a young Chinese man named Guo Fu who has just begun his studies at Hokkaido University.   He is bowled over by Shu Yi’s charm and gives her a present of a figurine of a pig with wings, telling her that the pig is a symbol of good luck and the wings symbolize freedom.  Shu Yi finds this charming and insists that Shu Yi join her in her final tour of Sapporo.

At the end of what must have been an exhausting day (they trek everywhere from Sapporo Factory to Maruyama Park), the two part ways, with Shu Yi being coy about them ever seeing each other again.  Guo Fu invites her to come and meet him on the banks of the canal in the neighbouring city of Otaru, so that he can show her the town where he lives.  One day, Shu Yi does show up and they have a whirlwind tour of the sights of Otaru from the Otaru Taisho Glass Palace to the Asahi Observatory.  It seems like an idealistic whirlwind romance, but maybe Guo Fu should have investigated the English meaning of a pig with wings.

Yosuke Yamaguchi’s Tourism Hokkaido “City” (2010) won the Best Short Award at the Short Shorts Film Festival & Asia.  The film was a part of the “Let’s Travel! Project” supported by the Japan Tourism Agency.  This contest encouraged filmmakers to submit short films that show off the rich and diverse cultural attractions that Japan has to offer tourists.  Unlike Heaven’s Island (2010), which showed off Taketomi Island in Okinawa without feeling like a promotional film, Tourism Hokkaido “City” is pretty cheesy and spends much more time acting as a postcard for Sapporo and Otaru than it does on developing the characters of Shu Yi and Guo Fu.  I only enjoyed the film because it was a natsukashii experience for me as I have a soft spot for Sapporo and environs because of the good times I have had there.

You can watch the trailer for this film here.

This film screened at Japan Week, Frankfurt am Main on November 5, 2011.