1975 was a decisive year in the life of Takashi Namiki, the animation producer, historian and the chairman of Anido (read his profile here).  Kihachirō Kawamoto invited Namiki to go to the Annecy International Animated Film Festival with him.  It was not only his first trip abroad, but also the first time attending such a large festival dedicated to animation.  He’d attended and organized animation screenings before, but this one week at Annecy “was like a dream.”  To have so many people gathered together who shared his enthusiasm for the art of animation caused him to feel strangely elated.

At the time “manga eiga,” as animation was then known, was not held in such high esteem in Japan.  Before going to Annecy, Namiki felt that he was the only one who truly understood animation as an art.  This notion was shattered completely at Annecy.  To learn that there were so many people interested in animation as an art and to discover so many wonderful animated works at Annecy was an inspiration to Namiki.

In 2000, Namiki published a photographic chronicle of his friendship with the “animated people” of the world called Animated People in Photo.  It documents the faces of animators, directors, historians, producers, and the organizers of animation festivals that Namiki met during the 25 years since that first festival in Annecy.

At Annecy 1975, Namiki could not speak the language and he didn’t know anybody yet, so he wandered around and took photographs.  The photograph that he is most proud of is of the great pinscreen animation pioneer Alexandre Alexeieff (1901-1982), who had shot to fame in 1931 with the film he made with his wife Claire Parker Night on Bald Mountain (Une nuit sur le mont Chauve).  The photograph opens the collection and is indeed one of the best photographs that Namiki shares with us in this book.  Other favourites of mine include a shot of Kawamoto chatting with legendary stop motion animator Karel Zeman at Annecy 1987, Barry Purves with chopsticks in Tokyo in 1995, Břetislav Pojar at Hiroshima 1985, a young  Hayao Miyazaki in some kind of a truck or van outside Shin-Akitsu Station in 1979, anime pioneer Kenzō Masaoka in his home (Tokyo, 1978), Les Drew at NFB Studios (Montréal, 1990), stop motion animation pioneer Tadahito Mochinaga at Hiroshima 1998, Ward Kimball doing an impression of Charlie Chaplin while holding a figurine of Chaplin (LA, 1991), legendary Chinese animator Te Wei (Tokyo, 1981), Yasuji Mori in front of his home (Tokyo, 1992), and Yasuo Otsuka in a Parisian antique shop (1999).  The photograph of the author himself at Annecy 1975 was taken by Kawamoto and is also one of the best photographs of the bunch. 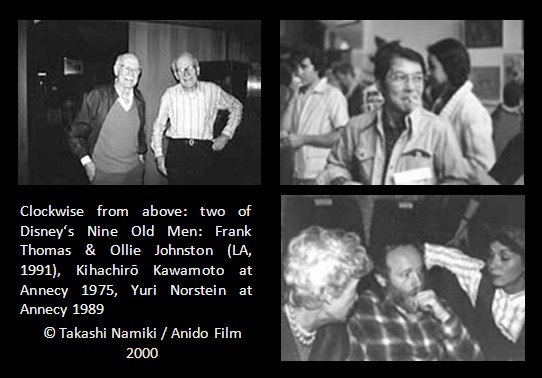 Animated People can be ordered online from Anido.  The photos are not printed on glossy paper, but still look reasonably good.  This is a must-have collection for the animation aficionado – though it’s hard to beat Namiki as a collector: his private archive boasts over 5,000 films and many relics of early animation.  The afterword by Namiki is only in Japanese, as are the profiles of the people photographed, but the photographs are all labelled in English.

Here is a complete list of the people included in the book by country:

Suicide is a solitary act but the ripple effects of such a death spread pain in an insidious manner through the lives of those connecte...