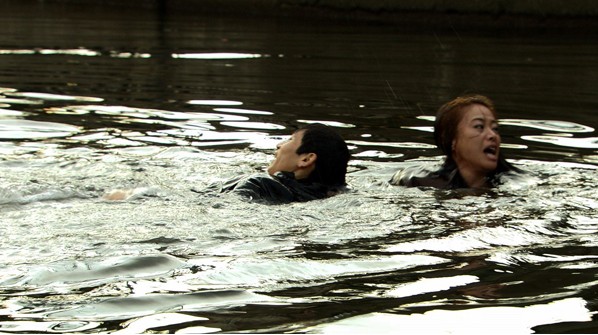 Life is never predictable and neither is Ryō Yoshikawa’s graduate film Panorama (2011).  The film begins in the nondescript hallway of a standard modern Japanese apartment with the voices of a couple arguing off-screen.  Just when we as spectators start to feel left out of the action, we are startled to attention by Haruka (Yūko Genkaku ) being thrown against the wall in front of us by her abusive husband Kenji (Yūya Matsuura).  Haruka also strikes back at her husband and both become implicated in the violence of their relationship.  We soon realize that we are witnessing this scene from the perspective of their confused young son, Takuya, the real victim in their disastrous relationship.

Kenji walks out on his family, leaving a jobless Haruka scrounging for work as a hostess.  Her mother (Hana Kino), berates her for screwing up her marriage and reluctantly takes poor, young Takuya under her wing for the time being.  Just when we are starting to get invested in Haruka’s miserable tale, Yoshikawa switches gears and throws us into the parallel plotline of salaryman Takuma (Kyosuke Shimamori).  Takuma is a newlywed, but is reluctant to talk about his wife Hana (Chika Uchida), who works as a tour guide, with his co-workers.  One co-worker in particular, Akita (Masaki Miura), is suspicious of Takuma’s unusual behaviour and for good reason.  Although small in stature, Takuma is hiding a big secret: he regularly follows women that he spots in the train station and rapes them in the public toilets.  His behaviour flies in the face of the usual stereotypes, for he is no loner: his wife Hana goes out of her way to try to spice up their marriage.  She greets him every evening with a home-cooked meal and even buys sexy lingerie to try to seduce him.

Eventually, these two parallel stories will collide in circumstances that leave us wondering what is real and what is imagined.  The characters in this compelling drama are all either caught up in a tangled web of their own making or in circumstances beyond their control.  It is about how ordinary people living ordinary lives suddenly find themselves feeling like they are drowning.

I was reminded of the famous poem “Not Waving But Drowning” by Stevie Smith (スティーヴィー・スミス, 1902-71) during one of the crucial scenes in the film:

Not Waving but Drowning

Nobody heard him, the dead man,
But still he lay moaning:
I was much further out than you thought
And not waving but drowning.

Poor chap, he always loved larking
And now he's dead
It must have been too cold for him his heart gave way,
They said.

Oh, no no no, it was too cold always
(Still the dead one lay moaning)
I was much too far out all my life
And not waving but drowning.

The Nara-born director Ryō Yoshikawa (吉川諒, b. 1985), was in attendance at the international premiere of Panorama at the Nippon Connection Film Special at Japan Week in Frankfurt am Main on November 6, 2011.  During the Q+A he shared a number of interesting facts about Panorama and the film program at Tokyo University of the Arts:

This event was sponsored by Nippon Connection:

and The City of Yokohama - Frankfurt Representative Office.