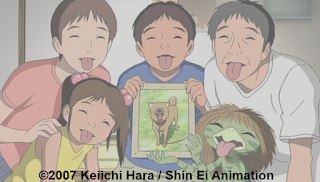 After more than twenty years in the anime business, Summer Days with Coo (Kappa no Coo to Natsu-yasumi, 2007) was Keiichi Hara’s break out independent animated feature. This was a bold and risky move for an animator in his mid- to late-40s who was already comfortably at the top of his career directing popular and award-winning anime for the Crayon Shin-chan franchise. The risk paid off, with Summer Days with Coo winning critical acclaim including the Grand Prize at the 2007 Japan Media Arts Festival Best Animation Film and the Mainichi Film Concours.

The central figure of the film is a creature out of Japanese folklore known as a kappa (河童). These water sprites are the size of a child and stand upright as people do but with frog, reptilian and turtle-like features. They swim well and inhabit the rivers and wetland habitats of Japan. Their most unique feature is the indentation on the top of their head which holds water and is said to be the source of their power.

The film begins in the Edo period with the young kappa protagonist Coo and his father in their wetland habitat by the banks of the Kurume River (today known as Kurome River). They have heard rumours that the swamp that they inhabit will be drained and converted into rice paddies. The kappa father decides to ask the local samurai to reconsider destroying their natural habitat. Kappa are renowned for their extreme politeness, but this does nothing to calm the nerves of the drunk and startled samurai who overreacts to the kappa's appearance and slices Coo’s father to pieces. He then goes after Coo, but an earthquake intervenes, and Coo falls into a giant crack in the earth.
After the opening credits, the scene shifts to modern Higashikurume where the land on which the Kappa’s swamp once stood is now a residential neighbourhood. Our adolescent hero, Kōichi, is walking home with classmates and enduring their taunting. They toss his shoe down to the banks of the river Kurome before running off. When Kōichi jumps down to retrieve the shoe, he discovers a large egg-shaped rock with what appears to be a fossil inside of it. He take it home with him to examine it, and while cleaning it the water magically brings Coo the kappa back to life.

Kōichi’s family and his dog adopt Coo – much to the chagrin of Kōichi’s younger sister Hitomi who dislikes attention being taken away from her – but they keep the kappa’s existence a secret from their community. Despite their efforts to make Coo feel welcome in their home, Coo longs for his native habitat and as it is summer vacation, Kōichi’s parents allow him to take Coo north to Iwate prefecture in search of other kappa. The trip solidifies the friendship between Kōichi and Coo, but a chance encounter with a zashiki-warashi (座敷童/座敷童子/a spirit said to live in beautifully kept old houses in Iwate) reveals that no kappa have been seen in the region for over a hundred years. 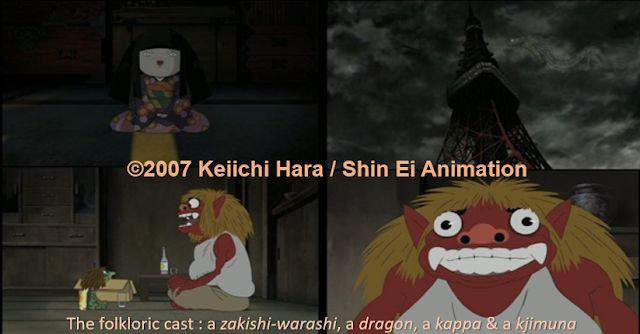 When they return to Tokyo, rumours about the kappa’s existence have begun to leak out to the press and the family becomes besieged by journalists. It soon becomes apparent that the kappa’s existence is seriously threatened by humans – even those with the best intentions. Coo faces the difficult decision of trying to co-exist with humans or to continue his search for his natural habitat and hopefully other kappa who have survived into the modern era.

In many interviews, Hara (原恵一, b. 1959) has cited Hayao Miyazaki’s work as having had an influence on his decision to go into animation. Like Miyazaki, Hara has turned to children’s literature for inspiration. The film is based on the novel The Amazing Journey of a Kappa (かっぱびっくり旅, 1980) by Masao Kogure (小暮正夫, 1939) which Hara discovered in the late 1980s. The story is the second in a trilogy of books about a kappa named Coo. The Kappa Uproar (かっぱ大さわぎ) had been published in 1978 and the final installment, Coo, Tengu, and the Great Kappa King (クウとてんぐとかっぱ大王) was published in 1985. In his spare time over the years, Hara slowly developed ideas for a possible animation project based on the material. When he seriously decided to develop the book into a screenplay more than a decade later, he met and discussed the project with Kogure and learned that this was the first time that someone had approached Kogure about animated his work. The film borrows story elements from the first and second books in the trilogy but also adds many original elements including new characters (ie Kōichi’s younger sister Hitomi and his love interest Kikuchi) which in turn adds new story elements (someone who initially dislikes Coo; someone who identifies with Coo’s status as an outsider).

The foregrounding of an environmental message and the use of the Japanese spirit world are also comparable to the feature films of Hayao Miyazaki and Isao Takahata, but that is where the comparisons end. Despite having a spirit as a central character in the film, Keiichi Hara uses a more realistic aesthetic than a Studio Ghibli film. The faces of the human characters are more angular and less polished, and the target audience is definitely not children. While older children would enjoy the film, it has very mature themes and I would advise that parents watch the film first before allowing their children to watch it so that they can prepare themselves for the very difficult ethical issues the film presents. In addition, there are some very brutal scenes such as the graphic murder of Coo’s father just five minutes into the film. While this may be upsetting to some viewers, Hara is not interested in sugar-coating the realities of human interactions with the natural world.

Another major difference between a Miyazaki film and this film is that the young female characters are not the heroes. The central relationship is between Coo and Kōichi. Kōichi’s younger sister is a spoiled brat for much of the film, but is depicted in a fairly realistic way for a girl of that age. The film does have positive female characters in the form of Kōichi’s mother, who becomes quite protective of Coo once she gets over her initial revulsion, and Kōichi’s love interest Kikuchi who, despite her outsider status, is a warm, intelligent, and compassionate girl.

The style of the animation in Summer Days with Coo is unique. It is not at all like Crayon Shin-Chan or any of the other mainstream anime that Hara worked on in his career. It looks like a mixture of traditional hand-drawn animation techniques, 2DGI and possibly manipulation of photographs. The rivers in particular sometimes look like photographs of real water that have been digitally enhanced or painted over – as does some of the architecture in scenes inside recognizable public places like train stations. The view Coo sees when he climbs Tokyo Tower is particularly spectacular, with much attention paid to getting the details of the architecture right.  My impression is that Hara uses whatever techniques are necessary, be they traditional or modern, to produce the kind of look he desires.

The contrast between the folkloric central character and the very real locations is fascinating. The animators have clearly travelled to these locations in order to portray them so authentically. On the journey north to Tōno, Kōichi must change trains in Shin-Hanamaki which allows Hara to bring his favourite author Kenji Miyazawa into the plot (read more about Kenji Miyazawa and anime here). Tōno also has famous associations with popular literature being the home of Kunio Yanagida, the collector of folktales of the region. Many of these tales involve the kappa, who are said to live in the stream called Kappa-buchi. I was quite moved by Kōichi taking Coo to see the sea at Kamaishi – the seashore is depicted very beautifully in the film but one cannot but help thinking of victims of the March 11 tsunami there.

The film has certainly merited the critical claim that it has received thus far. If I had any criticism for the film, it would be that the editing could have been tightened a bit. The film is quite long for an animated feature at 130 minutes and one does feel it dragging in some scenes. However, as this is Hara’s first time enjoying the freedom of working outside of a franchise anime I think he has earned the right to be a bit self indulgent with scene lengths. It has clearly been a labour of love and I enjoyed Hara’s take on folkloric creatures - some of which are rarely seen in mainstream anime.  In addition to the kappa and the zashiki-warashi, an Okinawan kijimuna (キジムナー) and a dragon flying around Tokyo Tower also make cameo appearances.