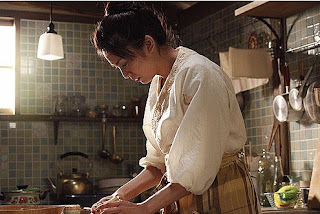 Freshness and simplicity are two of the defining features of traditional Japanese cooking. While in recent decades fast food may have made substantial gains in terms of popularity, there has long been a strong counter-resistance to these pressures of modernity. Rinco’s Restaurant (Shokudo Katatsumuri, 2010) is a film designed to appeal to an audience who appreciates organic slow food. In fact, a literal translation of the film title is actually “Snail Restaurant” – a name that Rinco chooses because of the slow and loving way in which she prepares her food.

Rinco (Kou Shibasaki) was born the only child of a woman named Ruriko (Kimiko Yo). Her mother has a reputation for having many boyfriends and cannot tell Rinco who her father is. At the outset of the film, we learn via Rinco’s first person narration that her grandmother has recently died leaving her only a donut and a pot of miso. Rinco loves her grandmother’s miso, and she dreams of using it one day to start her own restaurant.

She scrimps, saves, and works hard to earn the money to fulfil this dream. Along the way she falls in love with an Indian man, whose native cuisine inspires her further with dreams of the wonderful spicy dishes she could serve in her restaurant. It all comes crashing down when the man leaves her, stealing most of her possessions. The heartbreak causes Rinco to lose her voice, and she returns to her mother’s home with only her pot of grandma’s miso.


Still determined to accomplish her dream, Rinco enlists the help of family friend Kuma-san (Brother Tom) who lends her money and his construction skills. Together, they transform Ruriko’s back shed into a delightful little restaurant. It soon becomes clear that Rinco is not only a talented chef, but that her lovingly made food has the power to transform people’s lives.

Mai Tominaga's film has many parallels with Mipo O’s recent film Here Comes the Bride, My Mom (2010) in that the heart of the film are not the romantic woes of the heroines but the troublesome mother-daughter relationship. The film belongs to a recent trend in food films in Japan – such as Seagull Diner (Naoko Ogigami, 2006), Nonchan Noriben (Akira Ogata, 2009), and The Chef of the South Pole (Shūichi Okita, 2009).

(Como agua para chocolate, 1992). The dream aspect of Rinco’s Restaurant is captured through the use of musical numbers composed by Mari Fukuhara and cutout style animation sequences which were directed by Osamu Sakai of Robot (the same studio where Oscar-winning director Kunio Katō works).

, this film does not seek a resolution through romantic love but through the main protagonist coming to an understanding about who she is as a person. It is a slow-moving film, with magical elements and will appeal to viewers who also appreciate the slow life. The food styling was done by Tomoko Yoshioka of Okazu Design. The food really looks delicious and I am very tempted to order the tie-in cookbook that Okazu Design has published.

Based on the novel by
Ito Ogawa