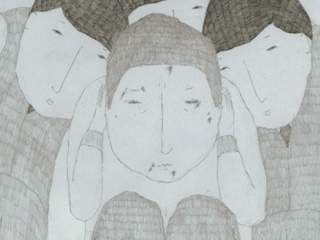 A predominant theme in the works of independent animator Atsushi Wada is the pressure of society for young men to conform to the will of the group. Gentle Whistle, Bird, and Stone (Yasashii Fue, Tori, Ishi /やさしい笛、鳥、石, 2005) repeats some of the salaryman imagery and carefully articulated character movement of Day of Nose (Hana no hi/鼻の日, 2005) and Manipulated Man (Koe ga dete kita hito/声が出てきた人, 2006), but in this film pressures put onto the main male protagonist by the group step over the line from manipulation into physical violence.
Wada opens the hand drawn animation on a medium shot of a young man wearing a sweater, looking bleakly straight into the camera. The sweater is significant because he clothes mark him as being different from the other young men in the group. An outsider. Cut to a close up on the upper torso and lower face of a male figure in a suit who blows into a flute, creating a dissonant whistling sound. The whistle turns out to be a kind of signal, and when the camera cuts back to the young man in the sweater, stones begin to be pelted at him from off screen, leaving welts on his face. He makes no noise at all. We only hear the ominous thud of the stones hitting flesh. The young man cringes with each impact, but then faces the camera again, his face devoid of emotion, as if this sort of punishment were a habitual one that he has resigned himself to. Wada then pulls the camera back into a longer shot which emphasizes the young man’s loneliness, with the stones gathering at his feet.
The man’s loneliness is contrasted by the togetherness of the mob that is attacking him. They are introduced first by their hands, passing a stone from clasped set of hands to another clasped set of hands. We then see a robotic line up of men in suits. As in Wada’s Day of Nose, the only differences among the men are subtle differences in their faces and hairstyles. The men attack like a automatons – the first row throws stones and fall down and the second row come en masse to pick them up and then the series of events repeats: passing of the stone between hands, wind up, throw, fall down, assisted up. The only sounds are the whoosh of the stones as they soar towards the victim and the awful thud as they hit him and fall to the ground.
The flute plays again and one of the men in a suit comes and puts an arm around the victim like an older brother or coach might do. He then says something incomprehensible to him (if it is comprehensible to any of my readers do let me know in the comments) - a phrase of some kind.  The intonation suggests that it is a demand.  Another man joins the group and does the same and this is repeated until all the men are surrounding the victim, repeating this phrase over and over again. The voice actor for all the men is the same – and it sounds as though the voice has been overlapped with itself to give an overwhelming sensation to the scene.
Indeed, the victim curls his knees up to his chest and covers his ears, his eyes tightly closed and his face grimacing as he tries to block out the mob as they surround him chanting. Eventually, it becomes too much for him and he hums in anger as he stands and forces the group to back away from him. The young man’s fist is clenched tightly and shaking with anger. He then steps to the side, reaching his hands out as if to halt someone.  His movement is so deliberate that it is like watching a Tai Chi pose being performed.
The spirit of a bird emerges from his hands and flies out of the group. All the men, including the victim, watch as the bird settles on the shoulder of the man playing the flute. The flautist looks at the bird, who snuggles into his face to distract him, then suddenly snatches the flute out of his hands and flies away. One of the bullies then picks up a stone and throws it into his own face. The other bullies soon follow suit, all of them throwing stones at their own faces like automaton gone haywire. The victim at first just looks blank, but then reaches down, picks up a stone and joins the self-flagellation.
The theme of bullying is also a topic explored by Wada’s fellow CALF animator Kei Oyama in his film Hand Soap (2008). In Hand Soap, the male protagonist is pelted with tomatoes as he stands against a wall. I am sure that this feeling of being an outsider is one shared by many independent animators who must struggle to find a place for themselves and their creative visions in an animation world that favours the popular and commercially viable over unique artistic talent. I read a moving interview David Ehrlich did with Renzō and Sayoko Kinoshita (in Animation in Asia and the Pacific

) before Renzō died in which they talk about the struggle they had in Japan in the 1970s and 1980s because the animation establishment were suspicious of their motivations as alternative animators.  It may have something to do with that old Japanese saying "The nail that sticks out gets hammered down" - a cliche, but unfortunately one that has a kernel of truth in it.
Where Oyama’s Hand Soap creates a full character for its main protagonist, showing his internal and external struggles at home and at school, Wada’s Gentle Whistle, Bird and Stone focuses on the act of bullying itself. The group abuse combined with the repetitive talking suggest that the scene is not just one of bullying, but also a ritualistic initiation of some kind into the group. The only glimmer of hope for the victim is the bird spirit that seems to come out of his own soul to whisk away the flute that is being used as a signal to start the group attacks. However, the whistle's disappearance does not lead to an end of violence, merely the start of a new form of suffering. As with all Wada’s films, it is not the easiest to watch, but there is something compelling about the way in which he draws and animates his short films. Like the repetitive actions of the characters in his films, I find myself watching them again and again and pondering whether or not there truly is a path to the cessation of human suffering.


© Catherine Munroe Hotes 2010
Atsushi Wada's Film Works will be released on DVD by CALF in December.


If you are in London, be sure to check out Atsushi Wada's films on Sunday at Zipangu Fest.