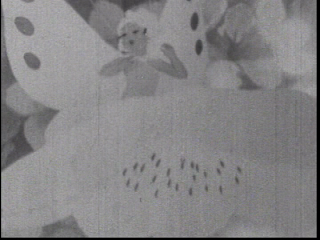 When it was made back in 1946, Kenzo Masaoka’s lyrical film Sakura (桜 / Cherry Blossoms) – also known as Spring Fantasy (春の幻想/ Haru no Gensou) – was not released theatrically because Toho felt that it was too artistic to succeed with the general public. Seldom screened in the intervening years, the neglect of the film is apparent in the poor quality of the film that Anido was able to digitally transfer to their DVD of Masaoka’s best works. Compare with screencaps of Benkei tai Ushiwaka (here) and Suteneko Tora-chan (here) to see what I mean.  It is even worse than the quality of The Spider and the Tulip, which is also full of scratches and colour fading.
Sakura is arguably Masaoka’s most lyrical film. The sensuality of the movement and the harmonious way the animation flows with the score of German Romantic composer Carl Maria von Weber’s Invitation to the Dance (the Berlioz arrangement conducted by Leopold Stokowski) is truly a delight to behold. There is no dialogue in this film. Instead, we witness the awakening of spring, with butterfly-like fairies taking flight to celebrate the cherry blossoms. In addition to the fantasy and natural elements, maiko (geisha in training) in full kimono and geta are shown dancing and running in the park in celebration of hanami (cherry blossom viewing). 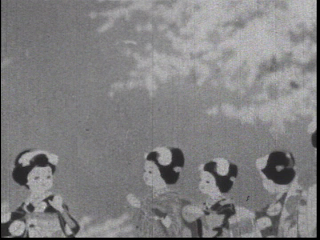 Maiko dancing under the cherry blossoms
- note the low angle in order to keep the branches in frame
Precious little has been written about this film, but I would imagine that the subject matter was chosen because it is devoid of any trace of propaganda (ie. it is not a traditional folk tale which would have been frowned upon by the American censors). It is also likely that Masaoka wanted to create a film tahat would celebrate  the end of the war, with the springtime theme recognizing the possibilities of a new beginning for Japan. The film is full of idyllic, cheerful images such as dogs playing in the park and a cat trying to catch a butterfly.  It expresses the hope that a peaceful and beautiful world will emerge from the devastation visible in so many Japanese cities in 1946. 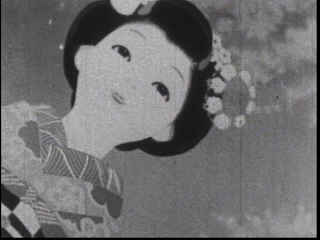 A surprisingly low angle of a maiko rushing at the camera
- it heightens the excitement and keeps the sakura in frame
The film surprises with unusual angles – such as the extremely low angles in order to take in the branches of the trees as the maiko dance under them, the women running straight at the camera (perhaps to emphasize their excitement), and an imaginative POV shot from a fairy sitting on a balloon looking down at the park below. The choice of camera angles makes it clear that the cherry blossoms are the stars of this animation - not the people or the cute animals and fairies.  Cherry blossoms appear in almost every frame of the film. 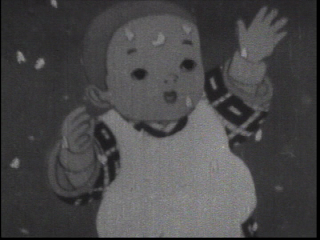 A young child with outstretched hands as his balloon floats away. 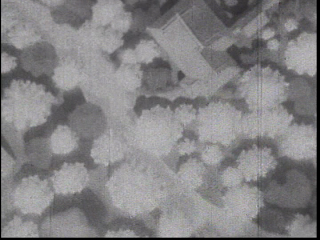 The park from the POV of a fairy who has caught up with the balloon.
My immediate thought while watching the film was that it may have been influenced by Walt Disney’s Fantasia (1940), but of course due to the war the film was not released in Japan until 1950. It is likely that Masaoka had at the very least read about Fantasia and seen stills from it. There is also the possibility that animators in Japan were able to privately screen the film long before its general release in the country. I know, for example, that Kihachiro Kawamoto spoke once in an interview of having seen Jiri Trnka’s The Emperor’s Nightingale (1949) screened privately at a custom’s house before it was publicly screened in Japan when he was an animator in training. Not being in Japan, my historical resources are limited on this score, so if anyone knows when Masaoka saw Fantasia, do leave a comment below. 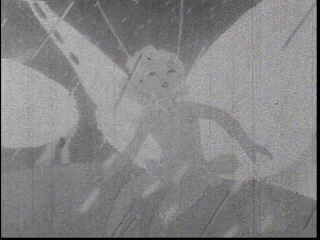 The fairy on the balloon as the rain begins to fall.
The comparison of Kenzo Masaoka to Walt Disney is an interesting one. There is no doubt that Masaoka’s skills as an animator are comparable to Disney, but that he lacked the resources (and later the eyesight) to make films of equal quality. Watching Sakura, one can only imagine what wonderous films Masaoka might have made if he had had access to funding and colour film stock (the latter being an impossibility in 1940s Japan).
A bonus fact, indirectly linked to this film, is that MGM animated a sequence using the same music as this film for Gene Kelly’s his landmark all-dance film Invitation to the Dance (Gene Kelly, 1956). This is a little known film due to its failure at the box office, but it is an important film in the history of dance. Click here to see how they shot Gene Kelly dancing to Invitation to the Dance with an animated woman.

This film appears on Anido's DVD of Kenzo Masaoka's Film Works, which may be ordered on their website.