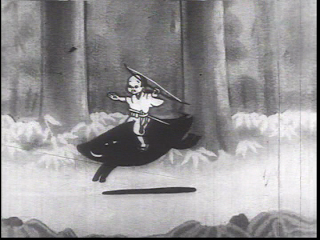 The late Heien tale of the legendary encounter between Benkei (1155-89), the warrior monk, and Ushiwaka, as the great general Yoshitsune (1159-89) of the Minamoto clan was known in his youth, is more legend than fact due to the intervening centuries of retellings. The story has appeared extensively in Japanese literature, theatre, and art. In most accounts, the great Benkei –often depicted as a wild giant of a man – has been told that he can forge a magic sword from the tips and cutting edges of a thousand blades. In order to obtain a thousand swords, Benkei stakes out Gojo Bridge in Kyoto and attacks samurai who cross it. One moonlit night, Ushiwaka (aka Ushiwaka-maru) approaches the bridge carrying what would be Benkei’s thousandth sword. Benkei attacks him, but young Ushiwaka is too quick for him and manages to defeat him. This impresses Benkei who swears to follow and serve Ushiwaka. 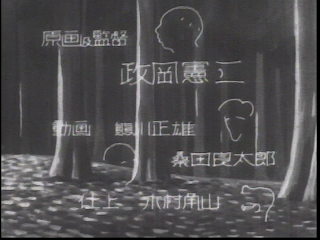 The pioneer animator Kenzo Masaoka (政岡 憲三, 1898-1988) chose to adapt this story for his 1939 animated short Benkei vs. Ushiwaka (べんけい対ウシカワ/ Benkei tai Ushiwaka). The animation begins by demonstrating Ushiwaka’s strength and youthful enthusiasm. The young man rides a boar into the forest in order to train himself to enter battle against the Heike (aka the Taira clan). He shoots arrows at an owl perched on the top branch of a tall tree but misses and the owl laughs at him. In his frustration he is thrown from the boar, and the boar laughs at him too. Ushiwaka becomes frustrated and climbs the tree and destroys the branches in a fit of rage. 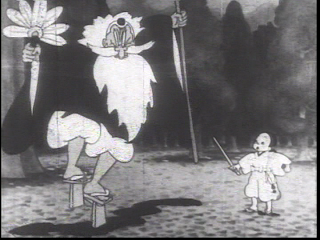 The tengu and Ushiwaka have a tantrum contest.
Note the high noon (or in this case midnight) shadows.
This angers the tengu (a magical spirit from Japanese folklore) of Mt. Kuruma who appears via a lightning strike that splits a tree in two. The tree magically repairs itself as the tengu steps out of it. The tengu asks Ushiwaka why he has cut the branches off the tree, and Ushiwaka explains that he has been training. The tengu declares the destruction of the tree to be unnecessary and the two engage in a comical fight in which they both stamp their feet in anger. 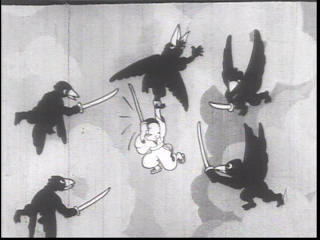 The tengu then offers to train Ushiwaka himself. At first, the two joust with each other, but then the tengu uses magic to transform leaves into crows with legs and swords. The crows attack Ushiwaka in a flurry but the young man manages to hold his own against them. After a spectacular action sequence in which Ushiwaka fights the crows while flying with them in the sky, Ushiwaka manages to prove his abilities to the tengu who congratulates him and sends him on his way. 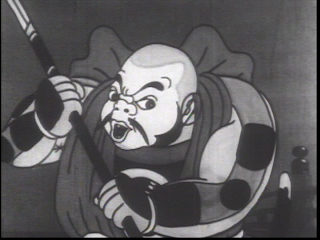 The scene then shifts to Benkei who, with the assistance of his young acolyte, are counting and bundling swords like stacks of firewood. They tag each sword with a number until they reach 998. Benkei then heads out to Goyo Bridge, determined to complete with collection of a thousand swords. As a samurai approaches the bridge, the young acolyte hides himself behind a nearby tree. Benkei procures sword #999 with ease. 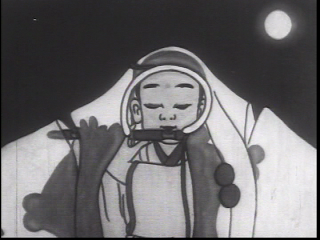 Urukawa approaches the bridge playing a haunting melody on his flute. Benkei can hardly contain his excitement at the chance to complete his collection of swords. A comical sequence ensues in which Benkei tries in vain to capture Urukawa like a cat attempting to catch a fly. Urukawa flits gracefully out of his reach, playing his flute the whole while.  The film ends with Benkei accepting his defeat with honour, and even being able to laugh at his own foolishness. 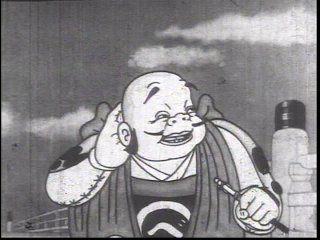 Benkei scratches the back of his head in embarrassment
and laughs at his own foolishness.
Masaoka’s adaptation is a historically significant animation in more ways than one. To begin with, it is a rare example of a Japanese animation that uses the American method of recording the voice-actors before the completion of the film. In post-war Japan, animating first then post-dubbing the voice acting became the norm and remains so until this day. Masaoka himself did the voice of Benkei and his wife played Ushiwaka.

The influence of Disney and Fleischer animation is apparent in the character movement – especially in the comical and action sequences. However, this is a pre-Bambi (1942) / pre-Tezuka film so the eyes and faces are very different from mainstream anime today. The character design of the protagonists, and Benkei in particular, seem much more influenced by traditional Nihonga (see the depictions of Benkei at artelino – and also the work by Kunichika and Kuniyoshi).

The cel animation is exceptional – often with more than three levels of depth to the frame. The careful attention given to the shadows on the ground that emphasize the brightness of the moon in the sky is quite painstakingly done. The variety of camera angles is quite sophisticated – I particularly enjoyed his use of extremely high and low angles to create dramatic tension. By 1939, Masaoka has clearly mastered the craft  of animation with each sequence of the film containing something of visual interest. This is not some boring retelling of a classical legend, but a tale full of action and laughs from beginning to end. One can imagine it being equally as popular with audiences as the U.S. imports that so influenced so many influential filmmakers from Kon Ichikawa to Osamu Tezuka.

One cannot overestimate the influence that Masaoka had on commercial animation in Japan. Not only did he train other animation trailblazers like Mitsuyo Seo (瀬尾 光世, b. 1911) and Yasuji Mori (森康二, 1925-1999), but even after retiring from animation due to eyesight problems, he continued to train younger generations of animators. He is also credited with coining the term “dōga” (動画) to refer to animation (literally “moving pictures”) - which is where Toei Dōga (today Toei Animation) got its name.

To read more about Kenzo Masaoka films check out these posts:

The Spider and the Tulip
Tora-chan, The Abandoned Kitten

This film appears on the Anido DVD Kumo to Tulip: Kenzo Masaoka Works. (no subtitles)

It also appears with English subtitles on the Zakka Films release The Roots of Japanese Anime, but I cannot attest to its quality as I have not seen this DVD.