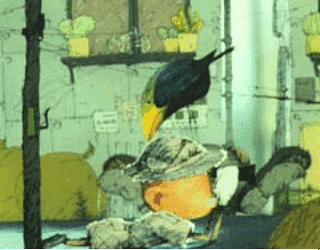 This four minute animated film written and directed by Koji Yamamura (山村浩二) in 1990 is an early example of the layered technique that Yamamura also used in his Academy Award nominated film Mt. Head (頭山, 2002). The film explores a chaotic Tokyo-inspired cityscape through the eyes of a small researcher who is a cross between Poirot and a British colonial era birdwatcher complete with binoculars, a white safari hat, and a notepad.

The multi-planed image incorporates a wide variety of animation techniques including line drawings, three-dimensional objects, and still photographs as background. As with many of his films, Yamamura uses a multiplane stand to create the impression of depth. This layering is emphasised through the use of dramatic focus-pulls and fades as well as an active, tracking camera.

For example, the background is often a static image, usually a modified photograph. The layer on top of this is a building that is more colourful than the background. The next layer usually contains active figures like the birds or the researcher, and in the foreground one often sees the silhouettes of trees as the camera pans through the scene.

The cityscape in Perspektivenbox is cluttered with road signs and barcodes that cover the sides of buildings. Crow-like birds, fantastic blob-like creatures with skinny limbs meander in and out of our view. The researcher is like an explorer in a strange world where he is dwarfed not only by the buildings but also by the human inhabitants who are quite tall in contrast to this strange caricature of a man with his oversized nose and moustache.

There are strange, surreal moments such as the Dali-inspired businessman with a clock for a head who checks his digital watch. Both the clock on his head and his watch show that time is flying by at a furious pace. In yet another surreal image, a large woman tries in vain to recapture his groceries, which have floated out of her bags and are drifting away from her.

The clutter of the city is emphasized by the cacophony of the soundtrack. Composed by Koji Ueno (上野耕路) the soundtrack uses dissonant sounds produced by a synthesizer along with some interesting passages on piano and bass. There is no dialogue, but Yamamura also uses sound effects such as dogs barking, footsteps, rustling noises, and onomatopoeic human noises familiar to Japanese audiences.

The researcher is clearly labeled as an outsider to the city by his size, costume, and his treatment of the city as an object of study. The choice of British colonial costume suggests that the city is a kind of jungle or wild place: a kind of uncharted territory for the intrepid explorer to record. The confusion and clutter of the city combined with the surreal, dream-like aspects of the film turn the city into a fantastic place that is out of touch with reality. One could easily read the film as a critique of modern life and city-living.

The film ends with a close-up of the binoculars on the ground, but with the images of the film still passing through them as if the binoculars were watching the film on their own. This suggests a certain level of self-reflection on Yamamura’s part. As the animator, he is the one holding the Perspektivenbox. The eye of the camera functions as his binoculars and the finished film reveals the results of his observations of the world around him in both its fantasticness and mundanity. 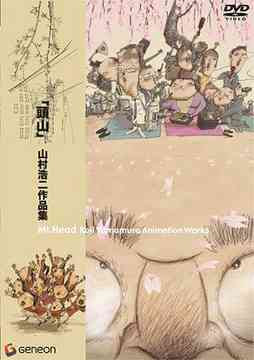