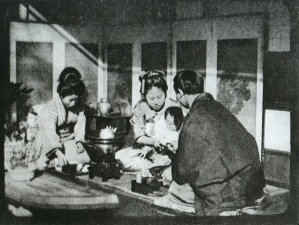 The Lumière brothers, Auguste and Louis, are of course famous film pioneers who invented the cinématographe, a camera that acted as both a recorder, printer, and projector of images. Not only did their early short films, or actualités travel all over the world, but they also sent their cameramen far and wide to capture exotic images of far away places such as Russia, Mexico, Australia, and Japan.

Repas en famille (Louis Lumière, 1897) is the first of more than two dozen Lumière films screening at NFC. Ostensibly, the Lumière actualités were meant to capture documentary footage of real life but there is a staginess about many of the films set shot in Japan. For example, the family in Repas en famille has clearly been positioned around their ‘meal’ (repas) in a photogenic manner, without anyone’s back to the camera, apart from the father who often turns to look at the camera.

The film might have more aptly been called ‘A family has tea’, because I doubt that a Japanese family would eat their food off the ground. It would be more likely that they would eat from a low table. From the assembly of accessories I would imagine that they are actually watching the grandmother make green tea for them, not their family meal.

The mother fusses with her two children while the grandmother fusses with the kettle. The father’s glances at the camera tell of an awkwardness of situation. He is clearly aware of the camera’s presence and gives me the impression that he is wondering how long they must keep up this charade. However, there is an authenticity to this kind of behaviour. If they were ignoring the camera’s presence altogether it would turn the film into a complete fiction. The ‘realism’ or documentary nature of this actualité can be found not only in the clothes the family are wearing and in the custom that they are performing for the camera, but also the awkwardness of the subjects relationship with this new technology that is recording their actions for posterity.

Although most on-line sources for this film credit Louis Lumière with direction, the NFC credits コンｓタン・ジレル as the cameraman. Constine Gilles? I will update when I discover the proper Roman script for his name. 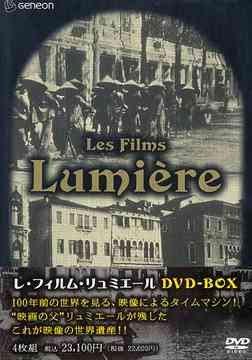