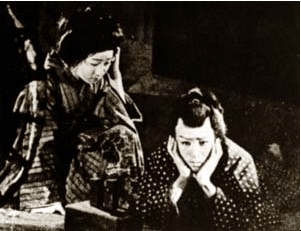 The National Film Center at the National Museum of Modern Art is currently running a special exhibition on the life and works of Teinosuke Kinugasa (衣笠貞之助, 1896-1982) to celebrate the 110th anniversary of his birth.

Kinugasa rose to fame as an oyama (female impersonator) in theatre and from 1917 in Shimpa silent films. In early silent cinema in Japan it was quite common for men to play the roles of women. This tradition was adopted from the cinema, but by the end of the silent period women were the norm.

Kinugasa adapted to changing tastes by moving into the director’s chair and he became a pioneer of avant-garde film in Japan with films such as A Page of Madness (狂った一頁, 1926) and Crossroads (aka The Slums of Yoshiwara, 十字路,1928). Kinugasa managed to get Crossroads picked up by a German distributor, making it the first Japanese film to be screened in Europe. It played in Berlin, Paris, London, and New York.

He also made many period films for Shochiku that brought Chojiro Hayashi (林長二郎), also known as Kazuo Hasegawa (長谷川一夫, 1908-1984), that were box office hits including the smash hit of its day The Revenge of Yukinojo (雪之丞変化, 1935-6). Like Kinugasa, Hasegawa had also started as an oyama in Kabuki theatre. He starred in hundreds of dramas and was a popular leading man for over 30 years.

Kinugasa is also famous in the west for being the first Japanese director to win the Grand Prix at Cannes. The film, Gate of Hell (地獄門, 1953) starring Hasegawa and Machiko Kyo (京マチ子) was the first Daiei film to be shot in colour using imported Eastman film stock.

The National Film Center labels its exhibits only in Japanese, but if you do not read Japanese it is still worthwhile (the entrance fee is only 200 yen!!) just to have a look at the impressive collection of photographs, artifacts, and to view some of the remarkable film excerpts that play on small flat screens throughout the exhibit. I found the blown-up photographs of Kinugasa himself particularly stunning. My favourite is the shot of him sitting at his make-up table preparing himself for an oyama stage performance.

Other items of note include the famous round glasses he wore as a director, his suitcase covered in stickers that document his stays in hotels across Europe, and an amazing selection of film posters. Not only are the posters for Kinugasa’s films works of art, but he also picked up a remarkable Russian poster for Battleship Potemkin when he was visiting Eisenstein and Pudovkin in Moscow in 1935.

In the section about his travels abroad in the 1930s, one can watch also footage Kinugasa took of things he found of interest. A short clip from Crossroads is also on display with English inter-titles.

For more on Kinugasa, read these essays on the Midnight Eye website:

Gate of Hell and A Page of Madness.