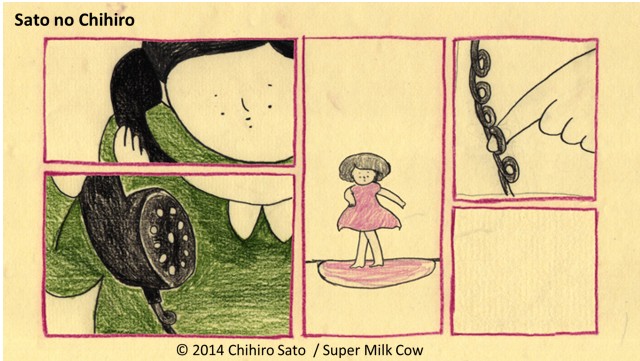 In recent years, thanks to digital computer editing technology, there has been a marked increase in the use of split-screens, not only in music videos but in feature films.  Films like Mike Figgis’s Timecode (2000) or Bruce McDonald’s The Tracey Fragments (2007) use split-screens to show simultaneous action in different spaces or the same scene from different points-of-view.

In Sato no Chihiro (さとうのちひろ, 2014), her graduate work for her degree at Tokyo Polytechnic University of Arts, the up-and-coming young animator Chihiro Sato (さとうちひろ, b. 1991) uses the idea of the split-screen, but instead of rendering it through computer technology, she draws each of the individual frames by hand.   This animated short was made using pencil and pencil crayon on paper.

The film consists of 7 vignettes, which each use different colour schemes and varying sized “frames” or mini-scenes within a scene.  The title is a play on the name of the director and suggests an autobiographical element to the subject matter. 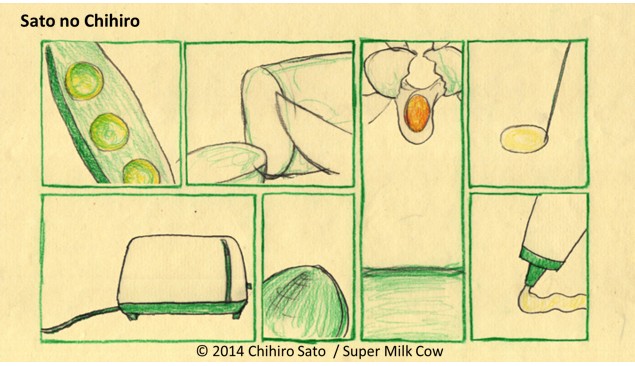 The film was originally made as Sato’s 2013 graduating work for Tama Art University’s animation program.  The version that I saw at Oberhausen 2015 had cleaned up the animation a great deal and had edited out 2 of Sato’s original 9 vignettes: “I Can’t Sleep / 眠れない / Nemurenai” and  “A Desire Towards Red / 赤への欲求 / Aka e no Yokkyu.” The vignette titles were in Japanese only and the translations to English are my own.

The predominant colours of the opening vignette are red, black, and yellow.  The screen is divided into
6 frames (3 top / 3 bottom), which appear to be drawn freehand in similar but not exactly measured sizes.  The scene depicts a girl with recently regrown armpit hair.  One of the frames features a close-up of the arm pit hair and we see that each hair are small figures sitting in a row with long hairs growing out of their heads.  When a figures is plucked out of the armpit hair they are then placed into gyōza (Chinese pot-stickers) wrappers and folded, then placed on a tray.  An amusing, but surreal vignette.

This vignette is black pencil on white and opens with the funeral picture of a middle aged woman, which the vignette suggests is the girl’s mother.   There are again 6 frames.  A ten yen coin falling to the ground prompts surreal images of ten yen coins floating in the air, followed by 10 yen coins falling to the ground, arms of people in black reaching forwards, hands collecting coins.  A fat middle aged woman grabs the girl’s leg. The girl moves her foot, woman takes 10 yen from under it.

There is a tradition in Japan of giving a grieving family money, but for me this sequence conjured up memories of how grasping people can be when a family member dies.  Whether bickering over an inheritance or property, sometimes the grieving family feels like everyone wants something from them.

This vignette is predominantly green with black outline. Multiple frames (8) of varying sizes show food preparation: peas out of pod, cracking egg, toaster, and so on.  There are faces on the food like in an NHK children’s show, except the vignette features sound effects without any music.

This vignette opens with a girl in a pink dress curtseying. The frames within the frame are drawn in a mauve pencil. A man in green has an old fashioned black telephone with the curling cord.  When it rings, he picks it up immediately, however, instead of speech, a small hand pokes through one of the holes on the part of the phone where one speaks.  The arm falls out and lands limply on the floor.
A finger through curl of phone cord in a rather suggestive fashion, and many more arms come out of the phone.

A red puddle.  A leg struggles to get out of phone as well and is helped by hands.  Two legs come out, when they land, they transform into the girl in the pink dress.  A fish (possibly a sardine?) comes out of phone, lands, and slices in two. The girl picks up the top half and takes it away.  The phone transforms into face and the girl feeds it raw fish.  The man picks up the picks up bottom half of the fish and eats it.  The sound effects more like crunching of a carrot than of a sardine.

Six frames drawn in orange pencil.  A labyrinthine setting in which surreal imagery suggests a sensual relationship between a doctor and an octopus.

A boy in blue trousers and green t-shirt frame top left looks up to sky with a handheld telescope. At the top there is one long rectangular frame titled on its side (!) and 4 small frames are along the bottom.
The night sky is dark blue and the frames are a greeny-yellow frame colour (same muddy yellow as the star colour). There is the sound of a ringing bell.  The boy uses what looks like a paint roller to capture one of the stars and eats it like it’s a cookie.  The other star rings like a bell. The boy tries to capture it as well but this time he cannot reach it.

A girl sits on ground bare legs tucked up.  In this scene the pencil frame fills almost the entire frame available.  There is a sand dune behind the girl and water laps up until it reaches the girl’s bare legs.

This animation is drawn in a very innovative style.  Although the meaning of each vignette is not always clear to me, they unfold like a kind of surrealist visual poetry.    I am very excited about the future prospects of this young animator.

Sato no Chihiro (さとうのちひろ, 2014) had its international festival premiere at Oberhausen 2015 and won the top prize at the ASK? Film Festival 2014 (ASK? 映像祭２０１４).  The film was produced by Amica Kubo for her production company Super Milk Cow.

Posted by Cathy Munroe Hotes at 5:34 am