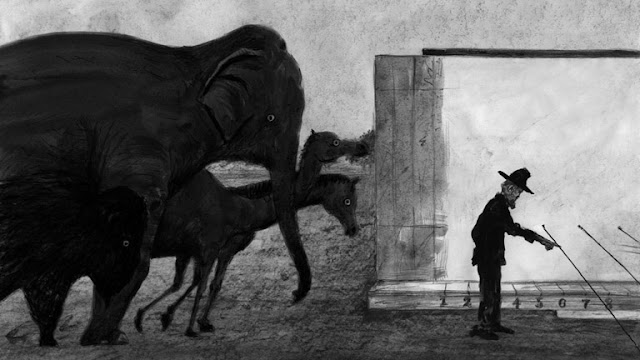 In his first collaboration with the National Film Board of Canada (NFB), the animator Kōji Yamamura takes us on a journey into cinematic history.  Muybridge’s Strings (2011) is a poetic investigation of the nature of time – a concept which has occupied philosophers since ancient times.

Our relationship to time underwent a radical transformation in the 19th century with the development of photography and related technologies.  The English photographer Eadweard Muybridge was among the first to recognize the scientific potential for photography in the study of human and animal locomotion.  The most significant of these was Muybridge’s 1878 series “Sallie Gardner at a Gallop” which settled the debate over whether or not all four of a horse’s four hooves leave the ground while galloping.  Most artists of the day usually painted a horse with at least one hoof on the ground, for the action was too fast for the human eye to determine all parts of horse locomotion.

To set up this experiment, Muybridge placed 24 trip wires (strings) at equidistant intervals (27 inches/68.58cm) that would trigger cameras to take a photograph.  It is these strings that inspired Yamamura to make Muybridge’s Strings.  The motif of strings interlaces itself throughout the film in a manner reminiscent of “the red string of fate” of East Asian folklore that is said to bind us together “regardless of time, place, or circumstance / the thread may stretch or tangle, but it will never break.” (see my discussion of Kazuhiko Okushita’s animated short The Red Thread to learn more.)

Two distinct storylines are woven together in Muybridge’s Strings.  The first is the remarkable life of Muybridge himself which Yamamura explores first through the man’s life's work – the film is replete with images from Muybridge’s famous photographic series (the elephant, American bison, naked man running,  mother and child, and so on) – and also through an investigation of the man himself through vignettes from his troubled marriage which ended in his murdering of his wife’s lover and being cleared on the grounds of “justifiable homicide”, through to his celebrated zoopraxiscope lectures at the 1893 World’s Fair in Chicago.

The second storyline is that of a mother and child in present day Tokyo, which was inspired by Yamamura’s observation of his own daughter growing up.  The speed with which children grow up draws attention to the passage of time – a constant reminder of how fleeting our time here on earth really is.  Visually, Yamamura distinguishes the two time periods by adding warmer hues to the Tokyo storyline, in contrast to the shades of grey of the past.  The two parallel stories are linked through the use of similar motifs: Muybridge’s stopwatch, mother and child, the clasping of hands, horses, and; of course, strings.

Strings bind the Tokyo mother and daughter together in a beautiful abstract sequence, but strings also appear as a motif in the piano that they play together.  The soundtrack of the film was arranged by the legendary NFB music director Normand Roger.  In keeping with the theme of non-linear time, they decided upon the use of J.S. Bach’s Crab Canon (1747) as a key musical motif in the film.  This is significant for the Crab Canon is a musical palindrome – an arrangement of two musical lines that are both complementary and backward.  Here you can see a video of the tune being visualized as a Möbius strip.

The soundtrack also foregrounds the sounds of technology: from click clack of photos being taken to the and the whir and clatter of the zoopraxiscope, which is considered the first device for the projection of moving images.  Although the technologies have changed in the ensuing 125+ years, our desire to photograph and capture fleeting moments of time has only increased.  With Muybridge’s Strings Yamamura manages not only to pay tribute one of the moving images pioneers, but to also open our minds to a consideration of our own relationship to the passage of time.

Muybridge’s Strings is available for purchase from the NFB on DVD and Bluray as part of the Animation Express 2 collection.  It will also be released on Bluray in Japan in August.

An exhibition of Koji Yamamura's works is currently on at Skip City until July 22.

Posted by Cathy Munroe Hotes at 5:39 am