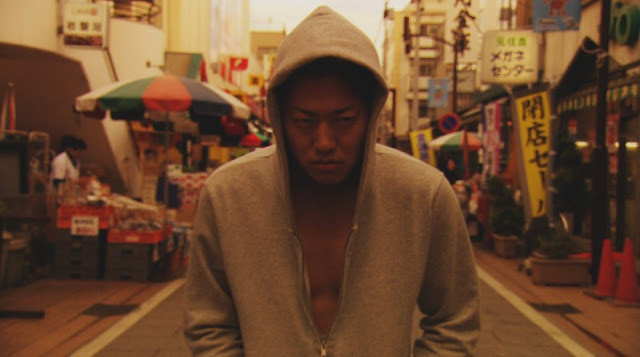 The original Yellow Kid was a popular American comic strip character from the end of the 19th century, appearing in Richard F. Outcault’s Hogan’s Alley.  A strange looking child shaved bald (a measure against head lice) with big ears, buck teeth, and dressed in a hand-me-down yellow nightdress, the Yellow Kid was the unlikely hero of the lower classes in Outcault’s biting satire of urban American life.

The conceit of Tetsuya Mariko’s film Yellow Kid (イエローキッド, 2010), is that 100 years after Outcault stopped drawing the Yellow Kid, a Japanese manga-ka named Hattori (Ryo Iwase) published his own version of the Yellow Kid under the pseudonym Iga Taro in which a down-and-out street kid transforms himself into a powerful boxer.   Just as the original comic strip colourfully incorporated images and ideas from American pop culture such as advertising signs and vaudeville, Mariko’s film blends live action drama with colourful illustrations from the Yellow Kid manga which the director drew himself.

The central character, Shiro Tamura (Kaname Endo), has little going for him in life.  Orphaned at a young age, his grandfather took charge of his upbringing until he also passed away.  Unable to hold down a job, Tamura lives in a decrepit house with his senile grandmother and tries to get by on her meagre pension.  Inspired by Hattori’s manga, Tamura clings to the one ray of hope in his life: training at the local boxing club.

When Hattori comes to the boxing club in search of inspiration for a sequel to Yellow Kid, it gives Tamura new hope that he can make something of himself.  The boxer who had inspired Hattori in his earlier work, Mikuni (Kazuki Namioka), is not only no longer boxing but also living with Hattori’s ex-girlfriend Mana (Mari Machida).  He eventually settles on Tamura as his new model for the Yellow Kid, but Tamura’s fragile mental state is pushed to its limits by the thug Emoto (Hideki Tamai) and the line between what is real and what is not real begins to blur.

Yellow Kid explores the world of people on the verge of falling between the cracks.  Directionless kids with no family support.  Elderly people without appropriate nursing care.  Disasters just waiting to happen.  Although there is little cheer in this film, it is strangely compelling due in a large part to the terrific performances of the actors and the fascinating colour palette of the film which mimics the vibrant hues of the manga and associates certain colours with certain characters (Tamura/yellow, Hattori/red, etc.).  The tension simmering in Tamura slowly builds throughout the film and explodes in a final half hour that is not for the faint of heart.  It’s quite impressive for a debut feature film, and promises more good things to come from Tetsuya Mariko.


This film screened at Japan Week, Frankfurt am Main on November 5, 2011.