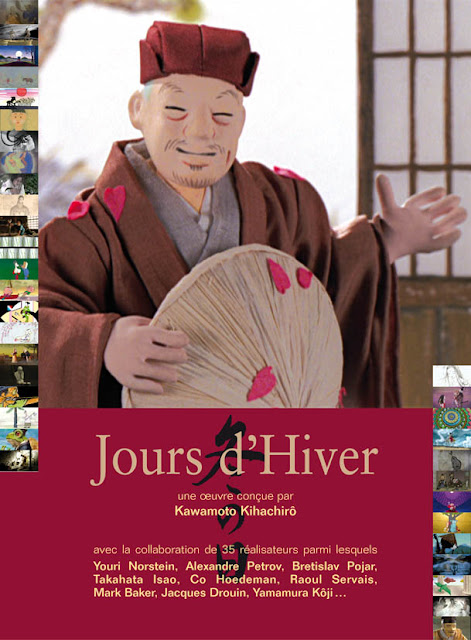 The strong cultural ties between France and Japan means that many treasures of Japanese cinema and animation unavailable elsewhere can be found on DVD in France. Living in Europe it’s a great alternative to ordering DVDs from Japan as the prices are more reasonable than overpriced Japanese DVDs and one doesn’t need to worry about customs.
Some recent treasures that I have picked up from France include Naomi Kawase’s Shara

/人間蒸発, 1967) for release this coming December.
This week I got my paws on the 2008 les films du paradoxe release of Winter Days (Jours d'Hiver/冬の日, 2003), a collaborative animation adaptation of a renku poem that I reviewed for Midnight Eye in 2008. It was a bittersweet experience re-watching the film and its "Making Of" footage as three of the animators, project coordinator Kihachiro Kawamoto, Prof. Masahiro Katayama, and Reiko Okuyama have passed away since the film was first released.

Apart from Jours d’Hiver the only other foreign DVD release of the film that I know of is in Korea. There were two DVD versions released in Japan – neither of which have subtitles. I have the slim line version which features "Making Of" extras and a collection of 8 postcard-sized illustrations and storyboards by Yuri Norstein and Kawamoto. There is also an insanely priced complete box set containing the film DVD plus 8 additional "Making Of" DVDs for a total of 945 minutes for hard core animation fans. Rumour has it that the box set footage is poorly shot and edited.  This knowledge, combined with prohibitive price, means that I will wait to check it out in a film library the next time I make a research trip to Japan.

Renku Animation "Fuyu no Hi" Kanzen Ban Box
9 disc boxset for 36,000 yen
The French DVD is very similar in content to the slim line Japanese release with the film in its entirety and the "Making Of" doc. With their cover art les films du paradoxe have clearly chosen to highlight Kawamoto’s role as organizer of the collaborative film using the cheerful image of Kawamoto’s Bashō puppet with his arm outstretched in friendly invitation. The cover also highlights the names of 9 of the most well known directors in Europe: Yuri Norstein, Aleksandr Petrov, Břetislav Pojar, Isao Takahata, Co Hoedeman, Raoul Servais, Mark Baker, Jacques Drouin, and Koji Yamamura.


The renku poem has been translated into French by the documentary filmmaker Catherine Cadou. Cadou is best known to fans of Japanese cinema for her work as an interpreter and assistant for Akira Kurosawa in his later years. Her documentary Kurosawa’s Way (Kurosawa, la voie, 2011) showed at Cannes to much acclaim in the spring and will be screened at TIFF Tokyo later this month (learn more about this doc at Wildgrounds).

Catherine Cadou’s translation of Winter Days is narrated by a series of voices over the Japanese title cards that appear at the beginning of each short, mimicking the style of the original Japanese voice track. The full French text also appears in the beautiful accompanying booklet (in lieu of the 8 illustrations/storyboards in the JP edition) with each stanza illustrated with full colour stills from its corresponding animated short. The booklet also contains short profiles of all the animation directors and an interview that Julien Bastide did with Kihachiro Kawamoto about the project for AnimeLand back in 2003 when the film had its premiere in France. The interview provides insights into how the project was conceived and how Kawamoto exerted creative control over the project. For example, I learned that in addition to Norstein receiving the honour of going first, that Kawamoto considered the stanzas written by Bashō himself (1st, 8th, 11th, 18th, 21st, 28th, and 31st) to be the most important. He divided the remaining six Bashō stanzas equally between Japanese (Furukawa/Okuyama and Kotabe/Takahata) and non-Japanese animators (Servais/Pojar/Baker) reserving the one he felt was the most challenging of these for the capable direction of Isao Takahata.


In my earlier screenings of Winter Days, I had not noticed that the composer for the film was Shinichiro Ikebe (池辺 晋一郎, b. 1943). Ikebe is a highly sought after composer having written the scores for many acclaimed films by  Kurosawa (Kagemusha, Madadayo, Dreams, Rhapsody in August). Other notable film scores by Ikebe include Imamura’s Vengeance is Mine (1979), The Ballad of Narayama (1983) and Warm Water Under a Red Bridge (2001), MacArthur's Children (Masahiro Shinoda, 1984), and the Future Boy Conan animation series (Hayao Miyazaki, 1978).
My only criticism of the French release of Winter Days is the fact that they have removed the Japanese voice track entirely. It would have been much more satisfying to have the option of watching the film in its original version with French subs. As I already have the original version it does not affect me personally, but animation collectors who do not speak French should take this into consideration. The "Making Of" documentary is subtitled not dubbed – several of the 17 animators featured in this footage speak French (Drouin, Servais, Hoedeman) and are not subtitled.


I personally delighted in Cadou’s interpretation of the renku as it gave me a fresh perspective on the poem itself as well as the animation adaptations.  It seems a shame that the film has never been picked up for English release given the prestige of the many animators who contributed to this unique project.

Posted by Cathy Munroe Hotes at 7:24 am