My good friend Ushka Wakelin, who teaches cooking lessons in the Tokyo area (see her JP profile at Niki’s Kitchen), recently sent me word that the 2nd annual Food Lovers Film Festival gets underway at the Tokyo Metropolitan Museum of Photography in Ebisu on October 8th.
I am a big fan of food themed movies, which have been a growing trend in Japan thanks to the dominance of women cinema-goers there.  My favourite food stylist is Nami Iijima, whom I wrote about earlier this year (see: Nami Iijima: Food Stylist Extraordinaire).  The festival programme features three films that she worked on: Naoko Ogigami's Seagull Diner (2006) and Toilet (2010) and Shūichi Okita's Chef of the South Pole (2009).
The two week event will present a total of 17 Delicious Films for food lovers as well as Yuri Nomura's documentary eatrip. While food is central to the plot in many of the films, like the Ebi Fry in Chef of the South Pole, in others it is simply part of a memorable scene in the film, such as Dustin Hoffman comically making French toast with his son in Kramer vs. Kramer.  The festival hopes that visitors will experience firsthand the connections between people and food through by not only viewing the films, but sharing meals with likeminded movie fans.
In order to make the festival accessible to a wide audience, the festival offers several Special Movie Screenings for Moms. Moms are welcome to bring their children to these screenings. Children can feel free to cry or chat during the screenings without fear of disturbing other patrons. If a Mom brings two Mom friends with her, they will pay a discounted entry fee of 1,000 yen per Mom.
For the visually impaired, the screening site is equipped with audio guidance that can broadcast explanations simultaneously during the movie showing over radio waves. If you bring a FM radio receiver along, you will be able to “watch” and enjoy the movie with the rest in the same theater room. A portion of the sale receipts from the collaboration product, “eatrip picnic bag”, will go to funding for the production cost of audio guidance.
Many of the screening events will be held in partnership with local restaurants and cafes. Eatrip can be viewed while enjoying an Okinawan dinner, Cooking up Dreams with a Peruvian dinner, Dinner Rush with an Italian meal, The Hangover with drinks and dinner, and so on. Go to the website to learn about these and other events including workshops and live music.
Events are subject to change; please consult the official website for screening times and locations.
17 Delicious Films Programme
English language films (with Japanese subtitles) 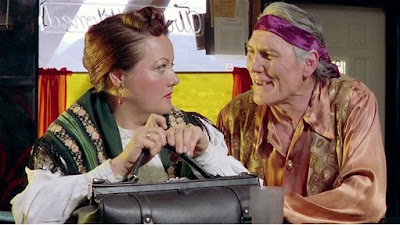 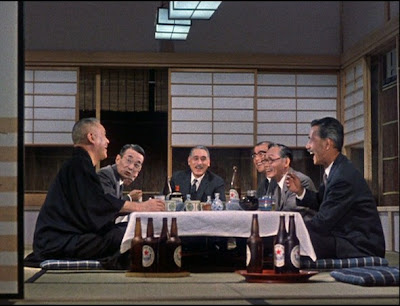 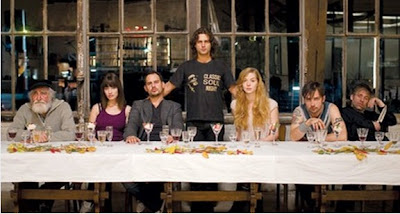 eatrip
Yuri Nomura, JAPAN, documentary, 2009
http://www.eatripfilm.com/
* All screenings of eatrip are with English subtitles.
Featured food from the film: stewed whole chicken with lemon and green sauce
One of the festival highlights is the contemporary Japanese food culture documentary eatrip in which director Yuri Nomura traces the relationship between food, people, the environment and spirituality.  This documentary takes the audience on a journey throughout Japan looking at how life can be led optimally through the daily ritual of eating. From the Tsukiji fish market to an Okinawan farm, the film offers poignant interviews with intriguing personalities. Featuring interviews with Nichiji Sakai, head monk of the Ikegami Honmonji temple; Kanji Takahashi, a distributor of Japanese soup stock (bonito broth); Naoko Morioka, an Okinawan leading a self-sustainable lifestyle; So-oku Sen a tea ceremony master and descendant of famed Sen No Rikyu; and Yayako Uchida, a musician and writer who recites poems about food. eatrip culminates with a passionate meal cooked by the director herself for actor Tadanobu Asano and singer UA and a handful of other eclectic guests.
October 8 – 23, 2011
Tokyo Metropolitan Museum of Photography
Yebisu Garden Place
Advance Admission: 1 ticket 1,300yen / 3 tickets 3,600yen
Admission at the Door: 1,500yen
http://tokyogohan.com/filmfestival/
twitter: @Gohan_Movie
facebook: http://www.facebook.com/TokyoFoodLovers
info@tokyogohan.com
Posted by Cathy Munroe Hotes at 8:37 pm