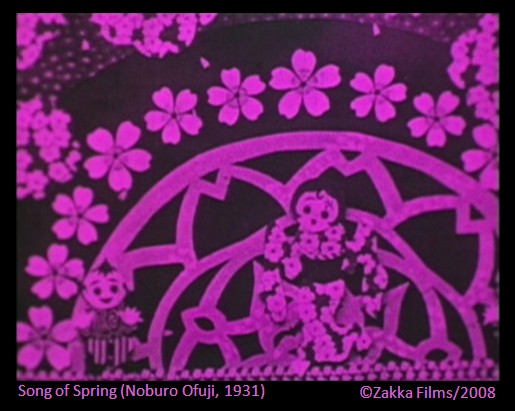 Noburo Ofuji (大藤 信郎, 1900-1961) is one of Japan’s top animation pioneers. His innovative chiyogami films represent some of the best in pre-Toei Doga animation. Cutouts were a common animation technique in the 1920s and 1930s because of their cost effectiveness. Not only was celluloid expensive because it needed to be imported, but cutouts can be used over and over again, reducing the more time-consuming manual labour of drawing individual frames for cel animation.
Song of Spring (春の唄/Haru no uta, 1931) demonstrates how Ofuji’s films stood out from those of his contemporaries because of his use of the unique textures and shapes of chiyogami. Originating in the Edo era, chiyogami is a brightly coloured type of paper traditionally printed using woodblocks. In Song of Spring, the use of chiyogami complements the aim of the film to teach children about national symbols (cherry blossoms, the hinomaru) and traditions (kimono costume, dancing and celebrating the arriving of spring).
Like his earlier work The Village Festival (村祭, 1930), Ofuji’s Song of Spring is a sing-along animated short aimed at a young audience. Instead of the “Follow the Bouncing Ball” technique which Ofuji used in The Village Festival, Song of Spring opens with a sheet of music onto which katakana appear one by one, spelling out the lyrics to the first verse.
The land of cherry blossoms
Sakura, Sakura
Flower blossoms blow in from east and west
Covering the asphalt here as well
My step turns wild amidst whirling cherry petals
The land of cherry blossoms
Sakura, Sakura
I think of you as spring bursts forth
A chandelier shining in my dreams
A bright kimono amidst the whirling cherry petals
The song, performed by Kikuko Inoue of the Asakusa Opera, is very catchy. While the song’s themes may be very Japanese, the song has a Western flavour to the performance style. I was reminded of patriotic music invoking nature from other countries like Flower of Scotland, Canada’s The Maple Leaf Forever, or Vera Lynn’s The White Cliffs of Dover. In fact, I would describe Inoue’s singing style as a kind of high-pitched Vera Lynn. In the DVD notes, Aaron Gerow mentions that the Asakusa Opera played an influential role in introducing Western music and musical theatre to Japan (p. 5).
The complexity of Ofuji’s cutout technique is apparent during the opening credits where he has movement happening in more than one part of the frame. Each section of the film is given its own scene. The first verse and its repeat are illustrated by the music score with lyrics and a cute sequence of dancing cherry blossoms with feet. During the instrumental bridge, Ofuji has designed a lovely sequence using cherry blossom shapes that move and develop like a kaleidoscope. The complexity of the animation increases throughout the film with the pièce de résistance being the lovely final sequence where a girl in kimono dances. The sophistication of movement as the girl mimics the whirling of the cherry blossoms is as expertly done as a Lotte Reiniger silhouette animation from the same time period.
The version of Song of Spring on the Zakka Films DVD is truly remarkable as a rare example of tinting in a pre-war Japanese film. Early cinema was not only black and white but quite often tinted either by soaking the film in dye in order to stain the film emulsion or hand tinted. Notable examples include Lotte Reiniger’s The Adventures of Prince Achmed (Die Abenteuer des Prinzen Achmed, 1926) and the recently restored A Trip to the Moon (Le Voyage dans la lune, 1902) by Georges Méliès, which premiered at Cannes in May and is screening at the BFI London Film Festival this month.
Certain colours in tinting were associated with different locations or times of day. An amber tint would be used for daylight interiors, for example, while a blue tint would suggest a moonlit night. . . or water as in the below image from The Adventures of Prince Achmed. Ofuji has gone with a pink tint in keeping with the cherry blossom theme of the song. 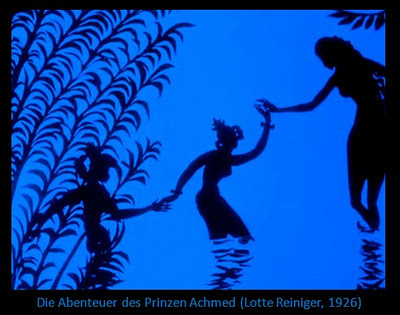 The opening title cards suggest that Ofuji shot the film on a Pathé Baby (パテ・ベイビー). The Pathé Baby film system used a unique 9.5mm film format introduced by Pathé Frères in 1922 and became quite popular in Europe in the 20s and 30s. The Pathé Baby did not record sound, so Song of Spring was designed to be played simultaneously with a Columbia Records phonograph record of the song. Not only does Columbia Records appear in the opening credits of the film, but the film ends on a shot of a Columbia Records phonograph record spinning amongst the cherry blossoms.
Song of Spring appears on the Zakka Films DVD The Roots of Japanese Anime with optional English subtitles. The DVD comes with an informative booklet that includes historical background by Jasper Sharp (Midnight Eye) and film notes by Aaron Gerow (Yale U). Individuals can purchase this DVD for a reasonable price from independent film distributor Film Baby. Institutions should contact Zakka Films directly for purchasing information.

Posted by Cathy Munroe Hotes at 7:52 am