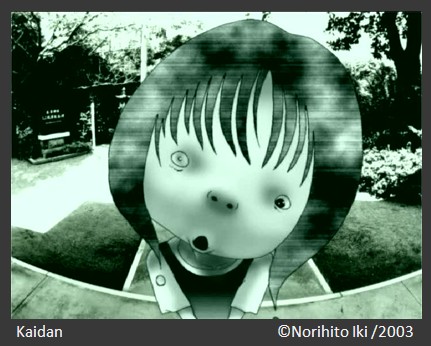 It is the height of a Japanese summer in Norihito Iki's animated short Kaidan.  The time of year when the cicadas are singing their song.  A young girl is kneeling over the remains of a frog, lamenting its death. As she peers down at the frog, one of her own eyes transforms into the dead eye of the frog. She goes to pay her respects at a Shinto shrine, where an image of the frog appears in the shrine’s divine mirror (yata no kagami / 八咫鏡). This startles the girl, who runs through the countryside with images of a fish, an eel, and the frog appearing like ghosts in the landscape.

The girl returns to her home, where the sound of the frog’s song seems to haunt her and she karate-kicks into the air as if to try to ward off the ghost of the frog. “Atsui,” she exclaims as the summer heat overwhelms her and she gets something to drink in the fridge. The frog’s ghost teases her, first appearing to slide out of the crack between the refrigerator doors, then hopping out of the table as if it were a pond surface. The frog ghost then drops onto her back like a heavy blanket.

The conceit behind this animation is the double meaning of the word “kaeru” in Japanese. As a noun kaeru (カエル/蛙) means frog, but as a verb kaeru (かえる/帰る) means to return / come back. On a simple level, one could interpret this as the girl’s desire for the return of her beloved frog. The use of the Shinto shrine, however, is no accident for the frog’s association with the idea of returning has meant that frogs are sold as good luck charms at many Shinto shrines as a symbol of the need to return to the hold place, or to give good fortune to the bearer.
As the girl herself appears so ghostly in Kaidan and the settings are devoid of other people, I wondered if the girl herself were a ghost looking for a way back to the land of the living. The title Kaidan is usually used in Japanese to refer to ancient ghost stories, such as those translated to English by Lafcadio Hearn under the title Kwaidan: Stories and Studies of Strange Things.  The kaidan that I have read or seen in films (ie Masaki Kobayashi's Kwaidan

) are best described weird and wonderful - and Iki's animation certainly meets both of these criteria.
The unique look of the film is created by overlaying the animation onto black and white photographs. For the landscape scenes, Iki has found wonderful locations on which to draw the ghostly forms of animals. The dark interiors of a Japanese-style house are naturally very suited to a ghost story and Iki uses this to his advantage. This film charmed me from the first moment I saw it because of its playful mixture of photographic (fish eye lens / playing with exposures), experimental (rapid montage/flickering), and animation techniques both old and new.

Order Thinking and Drawing Now
I first saw this film when I acquired Image Forum’s Thinking and Drawing: Japanese Art Animation of the New Millennium in January 2007 (read my review at Midnight Eye) and it has haunted me (in a pleasant way) ever since.  In addition to animation, Norihito Iki – a graduate of Musashino and Tamabi – is a professional photographer. Check out his official website or his new Facebook page to learn more about him and see samples of his recent work.
Music: Atsuko Sato
Voice acting: Momoka Fujita
Created and Directed by: Norihito Iki
text © Catherine Munroe Hotes 2011
Posted by Cathy Munroe Hotes at 11:01 pm