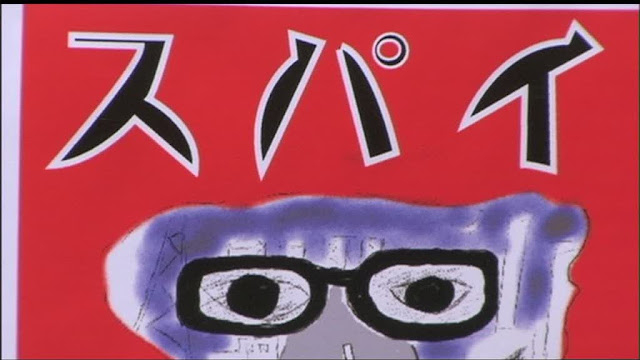 and Nodame Contabile) has an unusual turtle named Taro with a green and red painted shell as a pet. As far as pets go, turtles are not the most engaging of creatures. To make matters worse, when Suzume’s husband calls home from abroad he seems more interested in Taro the turtle’s welfare than in his wife.
Suzume’s life is much like that of the turtle: slow moving and mundane. This is in stark contrast to the life of her best friend Kujaku “Peacock” Ogitani (Yū Aoi of One Million Yen Girl and Hula Girls

) whose life seems full of adventure and has big plans to move to Paris and live with a Frenchman in view of the Eiffel Tower. All that changes one day when Suzume is the unfortunate victim of an apple cart spilling its wares done the flight of 100 steps Suzume regularly must climb to get home. As she cowers on the steps to protect herself from the onslaught of apples, Suzume spots a tiny “Spies Wanted” poster on the railing.
Replying to the ad, Suzume meets the Kugitanis – an unusual couple who claim to be part of an important espionage operation. They test Suzume and pronounce that her ordinariness makes her the perfect candidate to be a spy. Thus begins Suzume’s spy training – a journey that gives her a sense of purpose in her life for the very first time. The irony in all this, of course, is in the fact that the Kugitanis' mission and employers are never made clear.
Turtles Are Surprisingly Fast Swimmers (亀は意外と速く泳ぐ, 2005) is a quirky little comedy that will delight viewers who enjoy slow-paced, off-the-wall humour. Director Satoshi Miki’s choice of stylized sets and costumes are the big hint that this film should be read as a flight of fancy and not realism. Taro the painted turtle is quite literally a turtle whose shell has been painted red and green. The red and green motif repeats itself in Suzume’s costumes and in many elements of the set. It is a light film with a simple message: if one looks closely enough one can find the extraordinary in the ordinary. 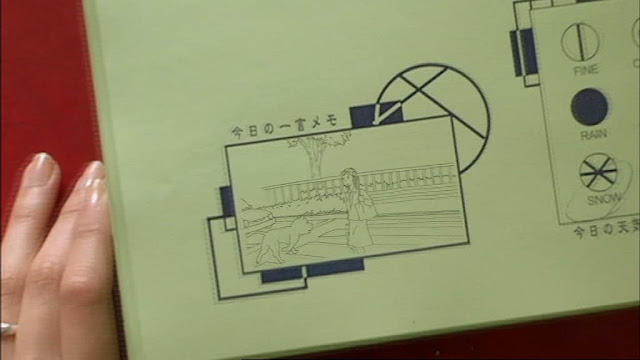 I was particularly delighted with the opening credits of the film which were designed and animated by Tobira Oda. Suzume is flipping through a giant pad of paper with flip book illustrations in its corner. The flip book animation – which is interspersed with film credits – shows an animated version of Suzume performing the mundane daily tasks of a housewife: preparing meals, hanging laundry, cycling to run errands, vacuuming, and so on. A simple concept executed in a very cleverly way.

Now
This month I will be featuring reviews of Japanese feature films released by independent distributors in the UK. I was saddened by the news (read more at VCinema) that one of the many victims of the riots this week in England was the Sony DADC warehouse in Enfield. One of the biggest distribution warehouses in the London area, it held the stock of more than a hundred independent record labels and film distributors. While insurance will cover the cost of the stock that went up in flames, with no current stock to sell many of these companies have been put into extremely difficult financial circumstances.
Third Window Films is the distributor for Turtles Are Surprisingly Fast Swimmers

in the UK.  They have written a long piece about the fallout from the fire on Facebook.  Other Third Window Films titles that I recommend include Fine, Totally Fine

(read my review) and Confessions of a Dog