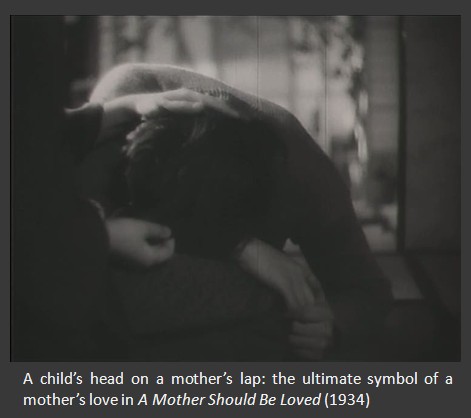 In support of the BFI, one of the many companies to lose their stock in the Sony warehouse fire in Enfield, I ordered their dual format edition of Late Autumn / A Mother Should Be Loved

last week. A Mother Should Be Loved (母を恋はずや, 1934) is one of the few extant Yasujiro Ozu films that I had not yet seen. Although the first and last of 9 reels that make up the film are missing, enough remains of the film to make it enjoyable viewing.
A Mother Should Be Loved is the type of family melodrama that was common at the time. It tells the story of two school-aged brothers from a wealthy home whose father (Yukichi Iwata) dies suddenly. Their mother Chieko Kajiwara (Mitsuko Yoshiwara), with the support of an old friend of their father’s whom they call Uncle Okazaki (Shinyo Nara) and his wife (Shinobu Aoki).
As the Kajiwara brothers grow up, it becomes apparent to them that their mother tends to favour the elder brother Sadao (Seiichi Kato/Den Obinata) over her younger son Kosaku (Shusei Nomura/Koji Mitsui). It is not until Sadao applies for college and sees his birth certificate for the first time that the family secret is revealed: he is the son of his father’s late first wife and Chieko is only his stepmother. Sadao’s bitterness over this well-intentioned family deception leads to a rift between the two brothers that the plot tries to resolve.

Visually, the film is unlike Ozu’s later style apart from a few favourite motifs such as clothes hanging to dry, factory chimneys, and trains. The house that the family lives in until the father’s death has a European furnishings which more resemble the set of an early Carl Dreyer film than an Ozu film. As the family’s financial circumstances become more difficult they move to a more modest Japanese-style home. 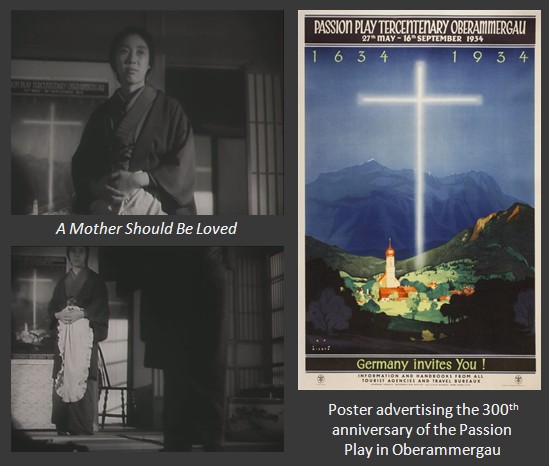 The most fascinating element of A Mother Should Be Loved that I would like to learn more about is Ozu’s use of poster art in the film. The mother is strongly associated with Christian imagery in the film in the form of a poster for the Passion Play Tercentenary in Oberammergau. In 1634, the residents of this small town in Bavaria made a pledge to God that if they were spared from the bubonic plague they would produce a play every ten years depicting the life and death of Jesus. With a few exceptions, the play has been performed every 10 years since. The event advertised in the poster in A Mother Should Be Loved was exploited by the Nazis as part of their greater anti-Semitic agenda and Hitler himself even attended one of the performances. It would be interesting to find out how much Ozu understood about the context of the event itself.  He certainly would not have know about Hitler visiting.  The film was released in May 1934 and Hitler saw the Passion Play in August 1934.  Without all the historical baggage, the cross on the poster merely functions metaphorically to suggest that the mother is adhering to the Christian principle of self-sacrifice.
In contrast, the brothel that Sadao moves into when he runs away from the family home has its walls papered with Hollywood and European movie posters.  The most striking of these is a stylized poster of Joan Crawford in Lewis Milestone's Rain (1932). Here is a screencap from the film alongside the original full colour poster: 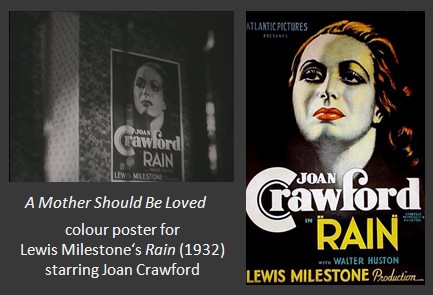 This is quite appropriate for a brothel as Joan Crawford plays a prostitute on a path to redemption and a life on the straight and narrow.  Many critics complain that A Mother Should Be Loved is "marred by melodrama" (Donald Richie, Ozu

, p. 219), but it is really quite tame in comparison to the over-the-top melodrama of Rain

(a film which I coincidentally saw for the first time in Japan - I picked it up in a 500 yen bargain bin several years ago).
Another poster in the brothel is for the G.W. Pabst epic Don Quichotte (The Adventures of Don Quixote, 1933) starring the wildly popular Russian operatic bass Feodor Chaliapin (spellings vary in different European countries).  It was the first sound film adapation of Miguel de Cervantes's novel and three versions were shot - French, English,and German - with Chaliapin singing in all three versions.  I couldn't find the poster used in the film but to get an idea of how it looked in colour I have found a different poster for the film as well as a poster for a theatrical version that uses a similar graphic design:

Alexander Jacoby, who wrote the introductory essay in the BFI booklet, remarks upon the thematic similarities between a A Mother Should Be Loved and the Julien Duvivier classic Poil de carotte (The Read Head

, 1932) about a boy who is unloved by his parents.  Like the Passion Play poster, the poster for Poil de carotte is made all the more poignant from the perspective of today because the child star Robert Lynen, in the title role of François Lepic was executed by the Gestapo for his role in the French Resistance in 1944. 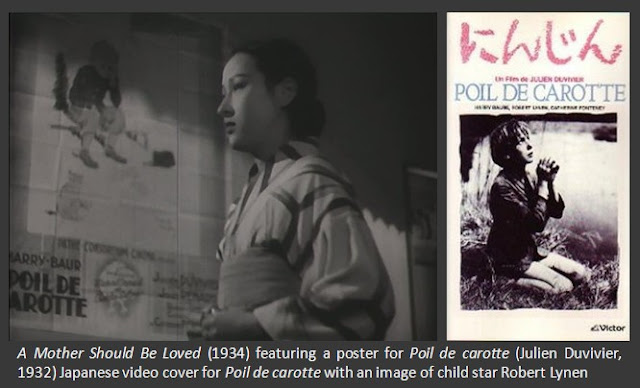 The final movie poster that I recognized in A Mother Should Be Loved is for the film Die Tochter des Regiments (The Daughter of the Regiment, 1933).  The film was directed by Carl Lamac and stars his wife (or ex-wife - they divorced sometime in 1933) Anny Ondra (most famous for her role in Alfred Hitchcock's Blackmail

) and Werner Fuetterer.  This is the most rare of the films referred to in A Mother Should Be Loved.  I do not know if a copy of it is extant, but it most certainly has never been released on DVD.  I would presume that the film is an adaptation of the Donizetti comic opera La fille du régiment (The Daughter of the Regiment, 1840)

A Mother Should Be Loved sparked my interest in learning more about the kinds of films Ozu was watching in the 1920s and 1930s and what he thought about them.  Such a shame that so many of his early films were lost as I am sure they would shed even more light onto craft of this endlessly fascinating film director.
Posted by Cathy Munroe Hotes at 8:34 pm