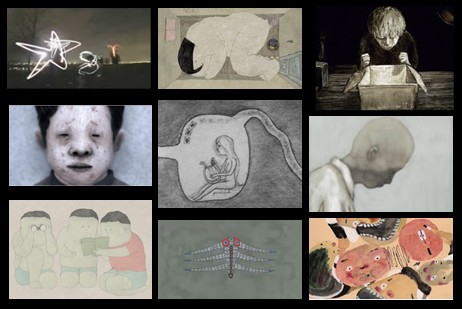 We had excellent turnout for the CALF events last weekend at Nippon Connection. There were three CALF Events: the CALF Animation Special screening event, the Filmmaker’s Discussion with Nobuaki Doi, Mirai Mizue and Takashi Nagata, which I hosted, and a PiKA PiKA Workshop with Takeshi Nagata of Tochka.
The programme for the CALF Animation Special was slightly different than in the printed programme that I reported on last month. The first half of the programme consisted of films by young animators. It opened with Aico Kitamura’s Getting Dressed (2010) which is one of my favourite recent animated shorts. Anyone who has trouble getting out of bed in the morning to face the world will be able to identify with the main protagonist of this film. I could hear murmurs of recognition from female spectators sitting around me during the film.
While Getting Dressed faces the topic of depression head on, many of the other animated shorts were even more distressing or disturbing including Saori Shiroki’s Maggot (2007), Dong-Hun Kim’s Yoko (2010), Shin Hashimoto’s Beluga (2011) , and Wataru Uekusa’s Gentle March (2011). Fortunately, these more depressing films were counterbalanced by the uplifting tale of Naoyuki Tsuji’s Angel (2008) and Masaki Okuda’s dynamic A Gum Boy (2010).
A Gum Boy is so far my favourite animated short of 2011 (see my picks for the top animated shorts of 2010 to get an idea of what I like). Not only are the drawings and animation well executed, but I love it when the movement and editing of an animation works so well with the rhythm of the soundtrack. In this case, Masaki Okuda has chosen a text that is rife with Japanese onomatopoeia (sound words) which give the piece bounce and humour. I am hoping to track down a screener of this film so that I can write a full review of it. Keep an eye out for A Gum Boy on the animation festival circuit this year.
The second half of the programme were animated shorts by the artists who already have DVDs on the CALF label: Atsushi Wada, Kei Oyama (DVD forthcoming this fall), Mirai Mizue, and Tochka. In addition to the films on the original programme, the line-up also included Atsushi Wada’s Gentle Whistle, Bird and Stone (2005) and Well, that’s Glasses (2007) and Kei Oyama’s Consultation Room (which appears on Image Forum’s Thinking and Drawing DVD).
The films Gentle Whistle, Bird and Stone and Oyama’s Hand Soap (2008) made quite the impression on the audience because they deal so directly with bullying and abuse. Oyama’s technique of using photographs/scans of organic textures can evoke physical sensations in spectators and one audience member in particular seemed to have been quite upset by the emotions the film stirred in him.
Wada’s latest film, Mechanism of Spring (2010) was received warmly with audience members laughing out loud at the antics of the young boys. Whereas many of Wada’s works evoke sensations of control, this film has a much freer, unrestrained dynamic to it. The audience also responded very warmly to Mizue’s works and marvelled at the intricacy and complexity of Tatamp (2010) and Playground (2010). One of the audience members asked Mizue if synaesthesia played a role in his matching of colour with music, but Mizue seems much more interested in matching animated movement to tempo. With each new film he challenges himself to use more complex movements and to experiment with layering the images in innovative ways.
Tochka’s latest film Steps (2011) was one of the highlights of the festival for me. I am an unashamed fan of Norman McLaren and the stop motion animation and pixilation in this film were inspired by McLaren and Claude Jutra’s A Chairy Tale (1957). A small PiKA PiKA figure arranges and rearranges tiles in a step formation on a checkerboard floor for a pixillated human figure to climb. A delightful modern use of stop motion animation.   It had apparently originally been conceived as an installation in which people had to view it view peepholes.
Takeshi Nagata of Tochka also showed me some 30 second stop motion animated shorts that he and Kazue Monno did for MTV many years ago. It is a shame that MTV did not allow CALF to put these on their DVD because they are fantastic.
I both observed and participated in the Tochka workshop last weekend. It was a lot of fun and I will write about the event when the resulting PiKA PiKA short is edited and available online.
The Austrian documentary filmmaker Stefan Nutz attended all of the events in order to shoot footage for his film about independent animation in Japan. He unfortunately had to cancel his trip to Japan in April because of the earthquake and tsunami but he has already gathered a lot of terrific material and it promises to be a very engaging film.
Thank you to everyone who came out and supported the CALF events at Nippon Connection. It was a great success and I think our guests from Japan were very satisfied with the response. CALF DVDs can be ordered via their online shop.