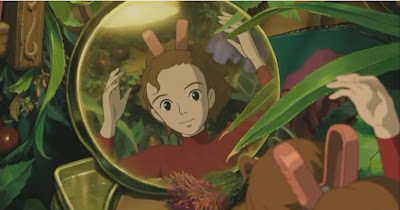 The Borrower Arrietty won the Audience Award at Nippon Connection last night. Many snorts of derision were to be heard from some of the film critics at the after party who felt that it was just more of the same from Studio Ghibli. I think that many of them were hoping that Hiromasa Yonebayashi would push the envelope a little bit further in his first chance in the director’s role for a feature film.
I, on the other hand, was quite delighted with Arrietty. In fact, as a Mom, I highly recommend it. Longtime readers will know that I am a big fan of Studio Ghibli films and may have wondered why I have not yet reviewed Ponyo

(Hayao Miyazaki, 2008). The reason is that my instinctive reaction to the film was a subjective one as a mother, rather than an objective one as a film critic. Yes, Ponyo has fantastic animation sequences – particularly of the waves – but as a mother there are elements to the storyline that remind me of things that upset me about how some children are raised in Japan. Ponyo is cute and appeals to small children, but there are some themes in the film that play on a Kindergarten child’s worst fear: the fear of being abandoned by their parents. My daughter was terrified by the wave sequences, and a huge part of it was that Sōsuke’s mother had left him and Ponyo to take care of themselves.
Arrietty, on the other hand, is a return to the older pre-adolescent girl type that we are familiar like Satsuki in My Neighbour Totoro

(Miyazaki,1989) and Chihiro in Spirited Away

(Miyazaki, 2001). Young Arrietty is lovely and confident and will inspire admiration in a young audience. The film is an adaptation of Mary Norton’s children’s novel The Borrowers

(1952) about little people who live in the homes of big people ("Human Beans") and borrow things that they need for their day-to-day lives.
The Yonebashi adaptation keeps some of the elements of the lush English-style home and garden from such stories but transfers it to a modern-day Japanese setting. There are elements that cause some confusion as to time and place. For example, the old house has a old-fashioned rotary dial phone, yet the delivery man has a cell phone. Yet these quirky out-of-time elements adds to the quaintness of the locale: a setting that looks familiar yet fantastic all at the same time.
As usual, Studio Ghibli has paid meticulous attention to detail and the design of the little people’s home and the big people's doll house is truly a delight. The colours and the lushness of the garden are truly delightful. I particularly love the added touch of Arrietty’s positive relationship with insects – a common motif in Japanese animation. The character design has the Studio Ghibli “look” that we have come to know and love, and there are some wonderfully funny characters to give moments of levity amidst the drama.
I must admit that I am also a fan of Celtic music, so I found Cécile Corbel

’s influence on the soundtrack quite pleasant. The best news for parents is that the film is 94 minutes, which is very reasonable for taking young children to the cinema. While I agree with my more cynical film critic colleagues that the film makes many “safe” choices so that it will do well commercially, I am optimistic that the success of Arrietty will give Yonebashi the confidence to spread his wings a little and show us his own individual artistic and creative potential. I am looking forward to taking my kids to see Arrietty when it comes to German theatres in June.
To order the DVD: