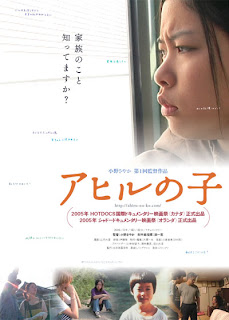 Scratch the surface of anyone’s life story and one is sure to find a skeleton or two in the closet. 20-year old Tokyo film student Sayoko Ono (小野さやか) seems to have many that haunt her. She suffers from depression and thoughts of suicide. For her graduate project, Ono decides to take her camera with her as she confronts members of her family in an effort to find some kind of a resolution for the pain she carries with her.  The resulting film is The Duckling (Ahiru no ko, 2005/2010)
Ono comes from Ehime prefecture, on the island of Shikoku. As she travels down to visit her family, she crosses the Seto-Ohashi Bridge which was built when she was a child as a way of connecting the isolated island to the industrial centers of Honshu for the first time. In many ways, Ono seems to be like an isolated island within her family, and she has been pushing down her suffering deep inside of her since her early childhood.  Inside, she feels like the ugly duckling of the proverbial tale by Hans Christian Andersen.
One-by-one, Ono confronts each member of her immediate family with declarations of incestual love, accusations of sexual abuse, and feelings of jealousy and neglect. She claims to have spent her childhood desperately trying to be a “good girl” in order to feel wanted and loved by her parents. The director traces her emotional breakdown to the age of 5 when she, along with dozens of other children from across the country, were sent to a boarding Kindergarten in Yamagishi (Toyosato, Mie Prefecture). A part of the Yamagishi movement – a network of egalitarian communities who try to live off the resources of the land – the Kindergarten offered children a one year experience in a rural setting. They promised the parents a kind of rural paradise where their children could plant vegetables, feed livestock and run free out of doors.
In actuality, the children suffered from intense homesickness and abuse (spanking, punishment for bed wetting). Although Ono knows that the Yamagishi experience is partially responsible for her psychological troubles, she has few memories of her stay there. So the second part of the film is her search for former classmates and employees of the institution. These shared memories are part of therapeutic process for Ono of piecing together her own fragmented memories so that she can move forward with her life.
On the one hand, this is a very brave, intensely personal documentary. On the other hand, I felt myself strangely unmoved during many of the most emotionally intense sequences. Normally such a personal, painful family history would move me to tears – as did Yongi Yang’s Sona, the Other Myself (2009) at last year’s Nippon Connection. What kept me an arm’s distance from the material was the way in which it was filmed. The scenes in which Ono confronts family members seemed to all be two camera set ups with a consistent soundtrack. This suggested to me that in addition to the family members in the room, there were at least two camera operators and a sound operator. My awareness of how many people were in the room, and how stylized it was (artsy cutaways and high angle shots) made me question the veracity of what I was seeing.
The question really is whether or not Ono’s family really consented to all of this being filmed. And if they did, then did they think it was just some school project that nobody would ever see or did they consent to it being shown to festival audiences around the world?  I find it hard to believe that all of them would sign consent forms for this film. In fact, one of her brother’s admits to a crime on camera – although I am not sure how doggedly Japanese police pursue sexual assault committed by minors. If it is real, then it is the first time I have seen a family challenged on camera in such a way by one of their own. As this film was shot over 5 years ago now, I wonder how Ono looks back on the emotional immaturity of her younger self. This is a very subjective film because Ono seems at this stage in her life unable to put herself into the shoes of others.
For me the most interesting part of the film was the Yamagishi footage and interviews. I would love to see Ono flesh this part of the film out. I did not know about the Yamagishi movement when I was watching the film and thought that the Kindergarten was one of these make-work projects where the government comes up with schemes to bring jobs into rural communities. The truth of the matter appears to be much more insidious and disturbing and I think Ono could really make an eye-opening film about it now that she has her graduate work under her belt. The Duckling is a problematic film, but definitely worth watching.
You can follow Sayako Ono on her blog and on Twitter (both JP only).
Posted by Cathy Munroe Hotes at 4:48 pm