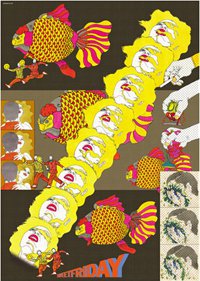 Great news from ANGURA!  Screenings of Keiichi Tanaami's films will be held in three Canadian cities this spring in celebration of the publication of his latest book/DVD set A Portrait of Keiichi Tanaami: 14 Films 1975-2009.  I got it for Christmas and it is terrific.  I will try to write up a review of it before the event.  The book and DVD are trilingual French/English/Japanese.
All proceeds from the Toronto screening will go to the Red Cross Japan Earthquake fund.
TORONTO SCREENING
Saturday April 23rd – 8pm
CineCycle (behind 129 Spadina Ave)
$8 / $5 students
Facebook
Keiichi Tanaami, born in 1936, is one of the preeminent pop artists of postwar Japan, producing a broad range of works since the 60s including experimental film and animation, woodblock printing, illustration, and editorial design. Tanaami’s imagery is provocative and playful, rooted in the realm of avant garde 60s pop psychedelia. In 1967 Tanaami took his first trip to New York where he discovered the works of Andy Warhol. These experiences opened him up to new artistic directions and in 1975 he became the first Art Director of Playboy Monthly (Japanese Edition). He has worked as a professor at Kyoto University of Art and Design since 1991, and his work continues to be exhibited around the world.
Screening in Toronto for the first time, these 10 animated works offer an introduction to Tanaami’s various styles and a trip through the eye-popping world of free form Japanese psychedelia. This event will also celebrate his newest release, A Portrait of Keiichi Tanaami: 14 Films 1975-2009, a beautiful edition containing a hard cover book with never-before published drawings for animated films, 14 films from 1975-2009, and two documentaries about the man himself, available for purchase at the screening.
This event is a fundraiser to aid the victims of the earthquake in Japan and has been made possible by the generosity of: Keiichi Tanaami, CaRTe bLaNChe, Toronto Animated Image Society, and CineCycle.
Presented by:
ANGURA! / Toronto Animated Image Society / CaRTe bLaNChe
WINNIPEG SCREENING
Friday May 6th
Plastic Paper: Winnipeg’s Festival of Animated, Illustrated + Puppet Film
MONTREAL SCREENING
Saturday May 21st
Blue Sunshine Psychotronic Film Centre
I also recommend heading over to ANGURA! to check out their new webshop featuring limited edition screen prints by Daisuke Ichiba.
Posted by Cathy Munroe Hotes at 4:25 am