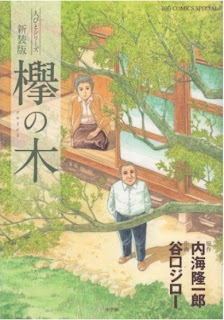 Over the past year, I have been making my way slowly through the German editions of Jiro Taniguchi’s graphic novels. Once I start reading a Taniguchi book, it is hard to put down until it is finished. They are quite philosophical and I find myself re-reading many them in order to fully appreciate the nuances of the story and its illustrations. The Carlsen editions are more expensive than your average manga, but they are beautifully bound and look very handsome on the bookshelf.
This weekend I read Von der Natur des Menschen – The Nature of People, which is published in Japan as The Keyaki Tree (欅の木). It is a collection of eight short stories by Ryuichiro Utsumi (内海 隆一郎, b. 1937) which were illustrated by Jiro Taniguchi (谷口ジロー, b. 1947) and published as the Hitobito Series (人びとシリーズ/The People series) in Big Comic magazine between May and August 1993.
Like Taniguchi, Utsumi writes moving stories about the lives of ordinary people. The stories in this collection focus on the sorrow that people feel because of changes that happen in their lives: parents divorcing, children growing distant from their parents, how the death of a loved one affects the family, and conflict between siblings. One of the strongest themes in the collection is the difficulty of balancing societal or family expectations with individual needs and desires.
Readers of all ages can identify with the characters in these stories. They range in age from young children to elderly people, but they all have one thing in common: their desire to be loved and understood by their families. Some of the choices that the characters make and some of the expectations that their families have are rooted in Japanese culture and society, but like an Ozu film there is a universality to each story that we can all recognize. For example, in the third story "Reunion", my natural instinct was to identify with Iwasaki’s ex-wife because of the way he just left her home alone with their young daughter for days on end. However, by the end of the story I found myself so moved by Iwasaki’s personal journey that the final page of the story moved me to tears. Utsumi is known for his ability to write heart-warming tales, but I suspect that Taniguchi’s illustrations are largely responsible for my emotional response to these stories. Taniguchi has an uncanny ability to draw emotive expressions on characters’ faces. Although these stories were not written by Taniguchi himself, their contemplative themes and the foregrounding of nature have much in common with other graphic novels that I have read by him.
The collection includes the following stories:
The Keyaki Tree (欅の木/Der Keyaki Baum)
A couple nearing retirement age buy a older house in the countryside because they have fallen in love with its beautiful garden. Unfortunately, when they move in they discover that the previous owners have taken all their plants and trees with them. Disappointed, they hire a gardener to replant the garden and take solace in the lone Keyaki tree that was left behind because it was too big to transplant. Their new neighbours complain that the tree is a nuisance because it fills their gutters with leaves and they ask the couple to chop it down. The couple are reluctant to destroy the beautiful tree, but at the same time do not want to cause friction with their neighbours. A surprise visit from the previous owner of the house causes them to think about the tree in a new light.
The White Rocking Horse (白い木馬/Das weiße Holzpferd)
The Kinoshitas have gotten used to living alone. Since their children grew up and left home, they only see their children and grandchildren on rare occasions like New Year’s. One day, their daughter Yoshiko asks them to look after her daughter Hiromi so that she can spend some time alone with her new boyfriend. The Kinoshitas decide to take Hiromi to the fair, but Hiromi remains sullen with them and is unwilling to go on any of the rides. Her demeanour only changes when they discover a coin operated rocking horse which finally brings a smile to Hiromi’s face. By the end of the day, the Kinoshitas have begun to warm up to their granddaughter and are disappointed when they return home to find that Yoshiko has come early to pick Hiromi up. As they talk with Yoshiko and her boyfriend, Mr. Kinoshita is shocked to discover the real reason Hiromi didn’t want to go on the rides at the fair. His reaction brings more strain to his relationship with his daughter, but strengthens the bond her is developing with his young granddaughter. 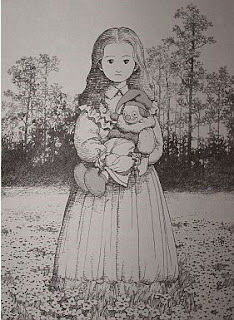 The Reunion (再会/Das Wiedersehen)
While on a business trip, Mr. Iwasaki discovers a photograph of his ex-wife and his daughter in the local paper. His daughter, whom he has not seen since she was a little girl, is celebrating the opening of her first exhibition of her own paintings. Iwasaki takes a painful trip down memory lane, recalling what a terrible husband he was to his first wife, and his shock when she left him to return to her parents in Osaka. He has since remarried and has two sons, but his sons do not share his passion for art. He decides to go to his daughter’s exhibition, hopeful that his middle-aged paunch and receding hairline will make him unrecognizable to his former family. The visit to the gallery turns out to be a much more emotional and rewarding experience than he bargained for.
My Brother’s Life (兄の暮らし/Das Leben meines Bruders)
After the death of his wife, Mr. Sakamoto’s older brother Keikichi has shocked the family by moving out of his son’s house into a pension in Shinjuku. Having recently retired himself and moved into his son’s home, Sakamoto decides to visit his brother to find out why he has broken with family tradition and is living alone. The brothers haven’t spoken in ten years, but they fall into conversation easily. Sakamoto discovers that Keikichi’s pride has been hurt by the fact that neither of his sons wanted to go into the family roofing business. Before visiting Keikichi, Sakamoto had assumed that his brother must be lonely, but he soon finds himself questioning whether he himself is the one who is unhappy with his present situation in life.
The Umbrella (雨傘/Der Regenshirm)
Kyoko Komaki’s brother Shin’ichi is coming to visit her for the first time in twelve years and she is nervous about how the visit will go. Kyoko and Shin’ichi were first separated from each other when their parents divorced. Kyoko was taken by her mother and Shin’ichi was left behind with their father – neither child had a say in the matter. Three years later, Kyoko was sent back to live with her father but she was never able to feel at home with her new stepmother and she and Shin’ichi never bonded again as they had as small children. Kyoko’s feeling of being an outsider led her to move to Tokyo as soon as she could and the only time her brother visited her they got into a bitter argument. After all these years, will brother and sister be able to mend their relationship as adults?
At the Art Gallery (絵画館付近/An der Gemäldegalerie)
Mrs. Otani is under a lot of pressure from her son and his wife to sell her home in Shizuoka and move in with them. Mrs. Otani loves her own home and enjoys her solitude, but she agrees to try spending the summer with them in the city. In the evenings, she escapes from her son’s home to go for a walk in the park. On a park bench by the art gallery, she meets an elderly man and they fall into the habit of meeting every evening and chatting together. Mrs. Otani is shocked to discover that she has fallen in love for the first time in her life, but one evening the man does not appear and she wonders if there is any future for their relationship.
Through the Forest (林を抜けて/Durch den Wald)
Two young brothers named Hiroshi and Yoji are forced to move from a large house into a small apartment with their mother. Their father has left their mother for another woman and Hiroshi is mocked for this in school. Making matters even worse, they have to give up their loving and protective Akita dog Koro because their new residence does not allow pets. Yoji becomes convinced that he can hear Koro barking on the other side of the forest every evening. The boys decide to travel through the forest to see if they can find Koro. Their adventure in the forest tests their loyalty to each other and brings them unexpectedly closer together.
His Hometown (彼の故郷/Seine Heimat)
Noémi is a 19-year-old French artist in Paris when she meets and falls in love with a 29-year-old Japanese man named Haruki. Despite their difference in age and the protestations of both of their families, Haruki and Noémi get married and after a visit to Haruki’s hometown of Nagasaki they settle down together in Tokyo. Noémi’s shyness and inability to speak Japanese leads her to keep to herself and her painting at first, but eventually she comes out of her shell and takes up Katazome and Japanese lessons. When Haruki dies suddenly, Noémi’s world falls apart, but she stays in Japan and after many years she is able to finally make a connection with her distant mother-in-law through her art.