Since  November I have been exploring a second-hand copy of the original publication of Laputa’s 150 Best World and Japanese Animation (ComicBox, 2003). The book provides a wealth of information giving context to the polling results, such as the individual lists of those polled along with their comments about their choices.  The polling was a very complicated affair with animators providing lists of varying length that were often unranked.  Examples include lists by Reiko Okuyama (former Toei Doga animator) and Takashi Yanase (the creator of Anpanman).

The organizers of the poll are critical of their own findings and decided to compile a list of 30 more treasures of world animation – which they call the PICK UP 30 – that they feel were unjustly neglected from the list of 150. These are 30 films that they deem important, and they are listed in no particular order.

Some notes on the Japanese animation on this list:
The Wild Rose (野ばら/Nobara) is a puppet animation that is not really known outside of Japan.  In fact, very little has been written in English about the career of puppet animator Katsuo Takahashi (高橋克雄).  He is considered a pioneer in the art of puppet animation in Japan, but his work has been rarely shown abroad.  I know that he made an adaptation of  Issun Boshi in 1967 which Kinema Junpo considered one of the year’s best. Even in Japanese there are only a few bits and bobs that have been written about him online such as reviews of his memoir about his grandmother in Nagasaki. He’s on my list of animators to find out more about the next time I’m in Japan.

Nobura Aihara’s early work Stone is high on my DVD wishlist (a list of DVDs I wish existed) as his work is rarely screened abroad. I absolutely adore the recent work of his that I have seen – simply mesmerizing visual poetry. His animation battles with Keiichi Tanaami know no equal in the history of animation. Whereas most of his recent films are hand drawn, some of his older works like Stone  involve manipulation of photographs.
Jasper Sharp has written a review of Ikeda's Animal Treasure Island


Akitaro Daichi's Ojarumaru (おじゃる丸) is the adaptation of Rin Inumaru's 1993 manga series of the same name. The anime series first aired in October 1998, and more than a thousand episodes later is still an on-going series on the NHK.  There is a sad irony to the fact that Ojarumaru continues to give audiences so much pleasure, when Rin Inumaru thought of herself as a failure. 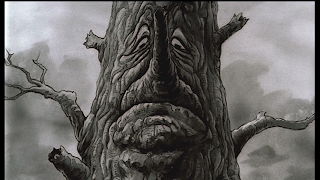 Legend of the Forest (森の伝説/Mori no Densetsu) won Osamu Tezuka his third Noburo Ofuji Award in 1987.  Accompanied only by Tchaikovsky's Fourth Symphony, Op.36, this visual feast has a powerful environmental message.  The film pays homage to a wide variety of animation styles from Emile Cohl to Disney.  The film appears of The Astonishing Work of Osamu Tezuka

Kiki’s Delivery Service (魔女の宅急便) is one of my favourite Miyazaki films - the broom flying sequences are second to none.  That being said, it does seem to be a bit of tokenism for it to be on this list. I think it’s the only major work of Miyazaki’s not to have made the Top 150 list.  Takashi Oshiguchi writes in the book that he prefers the pre-computer animation techniques of Kiki because everything is shown in such a way that you can take in all the details.  It seems that Oshiguchi found more recent films (I presume he's referring to  Spirited Away) a bit overwhelming visually.
Sakura (桜) is a classic in early Japanese anime.  Read my review of Sakura here.


The Illusion of Madame Butterfly (お蝶夫人の幻想) is a rare example of Japanese silhouette animation. It is considered a masterpiece of Japanese early animation.  The stills that I have seen of it remind me of the work of Lotte Reiniger.
Ika Matsuri (納涼アニメ 新谷尚之) and other work by Naoyuki Niiya work recently featured in Zipangu Fest’s Ero Guro Anime programme. Read my review of Man Eater Mountain to learn more about this artist.

. Two young children just miss their bus and discover a remarkable book on the bench as they await the next bus. When they open the book, the tower of Babel grows out of it, beginning a surreal journey into a literary imagination. As with all of Yamamura’s films, the depth of frame that he creates by layering the image is truly breathtaking at times.
Gestalt (Room/Form), an early work by installation artist Takashi Ishida, remains one of my favourites by him. It was shot over the course of a year in a Tokyo dormitory. Each day, Ishida would paint on the wall and photograph it using the available light from the window. The 7-minute long film is accompanied by haunting organ music composed by J.S. Bach. The wonderfully flowing lines and play of geometric patterns result in a quiet, contemplative piece that is stylistically reminiscent of Norman McLaren's experiments with music and animation.

Sadao Tsukioka’s Little Nemo was a pilot film and has never been released to the public.