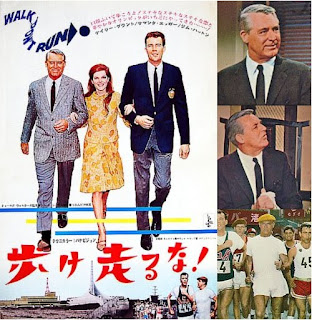 In 1964, Columbia Pictures decided to capitalize on the popularity of the Tokyo Olympics by using it as a setting for a romantic comedy starring the undisputed king of the genre: Cary Grant. Filmed on location during the Games themselves, Walk, Don’t Run

(歩け!走るな, 1966) depicts Tokyo as a modern city with touches of traditional culture in the form of gardens and Japanese-style houses.
Walk, Don’t Run is a remake of the wartime George Stevens comedy The More the Merrier

(1943) starring Jean Arthur, Joel McCrea, and Charles Coburn which poked fun at the unusual subletting arrangements that occurred during the World War II housing shortage in America. Charles Walters, who is best known for his musicals like Easter Parade

(1956), directed the film.
Sir William Rutland (Cary Grant), an English gentleman who travels often to Japan on business, arrives in Tokyo two days early and finds that he cannot get a hotel room because of the Olympics. He heads to the British Embassy for assistance, and he discovers a notice from someone offering to temporarily share their apartment. When he arrives at the address, he finds it occupied by a young, beautiful English woman named Christine Easton (Samantha Eggar of The Collector

fame).
Feigning ignorance at the impropriety of an older man sharing an apartment with a young unmarried woman, Rutland moves himself into the apartment while Christine desperately tries to lay down some ground rules in the form of a pedantic morning schedule. The character of Rutland is a rehash of the loveable rogue type character which Cary Grant had perfected in the course of his career in films like The Awful Truth

) who has also arrived in Tokyo early and is without lodging. Steve has a sarcastic, often abrasive, sense of humour which appeals to Rutland – it reminds him of himself when he was younger. Without consulting Christine, Rutland invites Steve to share half of his room with him resulting in even more awkwardness.
Cary Grant is given a lot of great lines and physical gags in Walk, Don’t Run, but the film’s producers made a crucial error in not making Grant the principle love interest. Instead, Grant is relegated to the role of matchmaker for Steve and Christine. While Steve may remind Rutland of himself, Jim Hutton’s performance is actually much more reminiscent of Jimmy Stewart (possibly Destry Rides Again

) – who gets a small cameo when an old Western of his dubbed in Japanese is shown on a TV. Any small spark of on-screen chemistry between Samantha Eggar and Jim Hutton is overshadowed by Cary Grant’s charisma and charm. . . and the way in which Hutton’s intonation and body language evokes Jimmy Stewart just reminded me of how effortlessly Cary Grant stole Katherine Hepburn away from Stewart in The Philadelphia Story

(George Cukor, 1940).
It is an old Hollywood story that actresses are put out to pasture as soon as they reach middle age – relegated to playing people’s mothers instead of leading ladies. Studios are always desperate to reach the youth market, and in the process sell short the possibility that a good love story will win fans no matter how old the actors are. In the mid-1960s there were so many great comic actresses of Grant’s generation who would have made a great foil for Cary Grant from Katherine Hepburn to Ginger Rogers if the studio had only taken a minute to think outside of the box. The only bit of action Grant gets are the humorous phone calls he makes to his wife back home in England.
All is not lost; however, as there is much enjoyment to be had watching this film besides the plot. The scenes shot on the streets of Tokyo really give a great impression of what the city was like during the mid-1960s. Shot in vibrant colours with a Panavision camera the reds of objects like Japanese post boxes really pop on the screen. Some great sequences include Cary Grant unabashedly smoking a cigar in a sento, the ferry ride to Mikawa and the walk through the park there, Grant climbing the exterior of a traditional Japanese house with shops at ground level when he gets locked out in his bathrobe, and the race-walking sequence.
I was relieved to see that the film doesn’t indulge too much in cheap gags about Asians (ie. like Bill Murray in the elevator with short people in Lost in Translation). . . the few that are there are overshadowed by Cold War stereotypes about Russians and other Europeans. The Japanese characters are all portrayed in a positive light – perceptive viewers will notice from their body language that none of the speaking roles are actually Japanese. The producers may have gone with Japanese-Americans not only for better communication but also for having the actors available for shooting the non-location scenes and re-shoots back in Hollywood. The cast is packed with some of the best Japanese-American actors of the times including Miiko Taka (Marlon Brando’s love interest in Sayonara

) and her ex-husband Dale Ishimoto (Battle of the Coral Sea

), Teru Shimada (best known for playing Mr. Osada in You Only Live Twice

), and even George Takei just shortly before his breakout role in Star Trek.
The Japanese characters all retain their dignity and even though Grant’s character is shown to not particularly like Japanese food, he gives the impression that he likes Japan and its people. I was particularly stuck by the way Cary Grant would throw off the occasional phrase in Japanese in order to interact with Japanese extras in scenes. It would be interesting to find out whether or not this was in the script or something Grant himself improvised. I highly suspect the latter because he was known for having his ad-libs make it into the final cut of many classic films (Bringing Up Baby

, etc.). His penchant for ad-libbing is pretty obvious in scenes where he whistles the theme songs to his previous hit films (An Affair to Remember

).
On the whole Walk, Don’t Run is an enjoyable film probably best watched at home (it’s long at almost 2 hours) with a group of friends and a few bottles of wine. Just make sure the friends are the kind who enjoy cheesy mid-century comedies à la Doris Day and Rock Hudson in Lover Come Back


• despite looking very fit and charming in this film, Cary Grant realized that the studios weren’t willing to give him the kind of romantic leading roles his fans wanted anymore and decided to retire from acting after this film. This disappointed Alfred Hitchcock, who had wanted him to play the lead in Torn Curtain

(1966). The role ended up going to Paul Newman.
• star Jim Hutton is the father of Timothy Hutton. His career was cut tragically short at the age of 45 due to cancer and his son movingly dedicated his 1980 Academy Award for Ordinary People

was a hit song for the Ventures in 1960 and again in 1964. The title of the film may have been influenced by the fact that the Ventures were (and still are) hugely popular in Japan. However, no Ventures songs were used in the film. The score

was entirely written by Quincy Jones and Peggy Lee at the recommendation of Cary Grant himself.