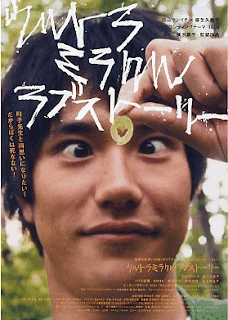 ) plays Yōjin, a 25-year old man who is trying to follow in his grandfather’s footsteps by running the family’s organic farm.
On top of the usual pressures of farming (insects, disease, weather), Yōjin struggles with a developmental disability or, as he describes it, his head is wired differently: “Not broken, but different.” He tries to improve his farming methods by listening to tape recorded instructions left behind by his grandfather, but his disability means that he is more quickly frustrated than the average farmer, and he is prone to acting out in ways considered socially unacceptable.
Yōjin lives alone with his grandmother, with his parents whereabouts being a complete mystery (are they dead? Did they abandon him with the grandmother because of his mental illness?). To try to give Yōjin some structure to his days, his grandmother has him plan out his days on a whiteboard. As the film progresses, this white board becomes a kind of diary for the thought processes that Yōjin goes through on a given day.
Yōjin’s life changes when Machiko (Kumiko Asō of Kaidan

), a yochien (Kindergarten) teacher arrives from Tokyo. Yōjin falls in love with her at first sight, having never had a "special someone" before, but Machiko is resistant to his efforts to woo her. She has come to the countryside to recover from the death of her boyfriend Shimada (played by Arata of Twentieth Century Boys

and Air Doll). Not only did he die in a horrific car accident, in which his head is rumoured to have been decapitated and never found again, but she found out that he was also unfaithful to her. Yōjin becomes convinced that he can cure himself by spraying himself regularly with pesticides, and thereby turn himself in to the man Machiko wants to have in her life. 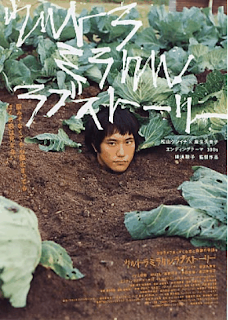 The film is occasionally humorous (such as the quack fortuneteller and her scrappy granddaughters who enjoy spreading gossip learned in fortunetelling sessions), but the pacing is slow and the film suddenly takes a turn midway through towards the surreal. The first clue that the film is moving into surreal territory is when Yōjin, with the help of a local boy, buries himself up to his chin in the cabbage patch and just barely survives the incident. The surrealism continues when Yōjin meets and falls into conversation with the deceased, headless boyfriend. Then there is also the strange moment when Yōjin appears to die and come back to life again.
For me, this film was a bit of a mystery. I wondered throughout if certain elements had some kind of symbolic or metaphoric meaning that might shed more light on how one should interpret the story (see the aside at the end of this blog entry).  As the storyline was difficult to comprehend, I found solace in the cinematography of Ryūto Kondō, whose work I have enjoyed before in Nonko 36-sai (Kazuyoshi Kumakiri, 2008) and A Gentle Breeze in the Village (Tennen kokekkō, Nobuhiro Yamashita, 2007). Kondō has a real knack for capturing the quiet beauty of the Japanese countryside.
Bare Essence of Life is also an interesting film because of its use of Tsugaru dialect (津軽弁). It was the first time that I had seen a film where Ken’ichi Matsuyama uses his native dialect. Many of the smaller roles and extras (such as the children and the woman Yōjin has a food fight with) are locals without previous acting experience. They add a sense of realism to the rural Aomori setting, in stark contrast to the surrealistic plot elements.  All in all, a strange but somehow fascinating tale.
Director & Screenwriter
Satoko YOKOHAMA
Cinematographer
Ryūto KONDŌ
Music
Yoshihide OTOMO
Cast
Yōjin Mizuki • Ken’ichi MATSUYAMA
Machiko • Kumiko ASŌ
Ta Tanaka • Seiji NOZOE
Kanama Shimada • ARATA
Dr. Misawa • Yoshio HARADA
Shibata • Misako WATANABE

"Ultra Miracle Love Story" Picture Book
Kayo Ume, Eri Okamoto
An aside for those who have seen the film:
I am not sure if there is any significance to the use of  cabbages & potatoes, apart from the fact that they grow them in Aomori – the prefecture is more famous for its apples.
The bear is a symbol of masculinity among the Ainu of Hokkaido, and elsewhere in the world, so I imagine the same would be true in Aomori – but this does not satisfactorily explain the bizarre brain-in-a-jar sequence at the end of the film.
The brain as a symbol also puzzled me. I was reminded of the research an American friend of mine who studies medical ethics was doing in Tokyo when I lived there. She told me that heart transplants were rarely performed in Japan because of people’s reluctance to accept “brain-dead” as a reasonable reason to farm hearts for transplants. The word for heart in Japanese, kokoro (心), also means ‘mind’ and ‘spirit’, so unlike someone from western culture who believes that the spirit of the person is gone when they are declared ‘brain dead‘, in Japanese culture if the heart is still functioning, the person’s spirit still resides in the body. (There are other reasons, outlined nicely in this article). (htt So when Yōjin declares that he has a stopped heart and no brain, I wonder how a Japanese audience might interpret this differently from myself.
I would enjoy hearing the thoughts of others who have seen the film in the comments section.