Naoyuki Tsuji Ripped Off by Facets 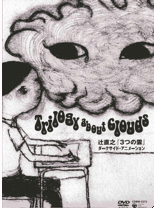 I have been a big fan of Naoyuki Tsuji (辻直之)'s hauntingly beautiful charcoal animation since I first encountered it when I saw Image Forum's Thinking and Drawing. I have been collecting Japanese art animation for the past few years and looked into buying the American release of Tsuji's work earlier this year. One does not need subititles to understand it as the films have no dialogue, but I wanted to see if there were any films or extras of interest on the DVD. I was a bit hesitant to order anything from Chicago's Facets Video because while doing a research project in 2003, I ordered a copy of Nina Menkes's experimental film The Great Sadness of Zoharra (1988) from them. I was living in the UK at the time, and copies of Menkes's films were scarce, so the Facets VHS video was my only option. I was pretty shocked at the quality of the product. The VHS cover was merely a colour photocopy, and while one does expect poor image quality of a VHS tape it was exceptionally disappointing. I really could make no judgement of the artistic merits of the original film and had to rely upon the judgements of papers by academics who had seen the film projected.

After mucking about on the Facets website for a bit, I looked for reviews of the Tsuji DVD but found none. Eventually, I happened across a fiery discussion about Facets on the Criterion discussion boards. Needless to say, I decided it wasn't worth the trouble of ordering. I already have a copy of Columbia Japan's release Trilogy about Clouds (pictured above), which features not only the trilogy but also Sameru (Wake Up, 1992), Kiekaketa Monogatari-tachi no tame ni (For Almost Forgotten Stories, 1994), Yoru no Okite (Rules of the Night, 1995), and experiment (1997)., not to mention a documentary about Tsuji's time as a special guest at Cannes in 2005. Yami wo Mitsumeru Hane (A Feather Stare at the Dark, 2003) can be found on Thinking and Drawing.

It turns out that I made the right decision because representatives for Tsuji just released this statement earlier in the month:

During the DVD making process, neither the artist nor the video licensor had any chance to check the contents. They both finally checked the contents in February 2009 and found thefollowing problems in the DVD package:

The most serious problem is TRILOGY ABOUT CLOUDS, which was officially selected inDirectors' Fortnight in Cannes Film Festival 2005, was not recorded in its original form – the picture comes with a totally different music.

If you have any questions regarding this matter, please feel free to contact:

Tomoyuki Suzuki
video licensor for North America / CEO, Tomo Suzuki Japan.Ltd.
e-mail: mail(at)tomosuzuki.com
phone: +81-3-5468-7172 fax :+81-3-6277-5779
address: Villa Moderna C-403, 1-3-18 Shibuya, Shibuya-ku, Tokyo 150-0002 Japan
From this statement, it is clear that Facets has acting extremely unprofessionally throughout. It sounds to me like the deal was that Facets would put English subtitles onto the Columbia Japan DVD while maintaining the integrity of the original image and soundtrack.

Facets Video is truly a mystery to me. Surely someone who is a fan of the rare artistic films that they produce videos and DVDs of would also be concerned about maintaining the artistic integrity of the films. Am I missing something here? There is money to be made in selling phony reproductions of blockbuster films, but the kind of people who like art and indie films are concerned about the quality of the image and the soundtrack. It just doesn't make any sense that they would tamper with an artist's work in this way.

I encourage all fans of indie film to boycott Facets Video until they start to treat the artists' whose films they reproduce with the respect that they deserve.

To support this artist, please order Trilogy about Clouds through a reputable dealer like yesasia:
Naoyuki Tsuji - 3tsu no Kumo ("Darkside" Animation) / Animation
Posted by Cathy Munroe Hotes at 7:21 am