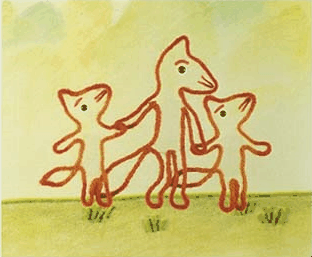 Despite having won the Noburo Ofuji Award more than any other animator, Tadanari Okamoto’s work is rarely shown outside of Japan. However, his ground-breaking animation will be instantly recognizable to many Japanese people – especially those who grew up in the 1970s and 1980s because many of his films were used for educative purposes in schools and libraries across the country.


Of these educative films, my favourites are the Are wa dare? (Who’s that?, 1976) shorts. These ten tales, averaging about two minutes each in length demonstrate Okamoto’s true genius: using innovative animation techniques to tell simple but effective stories. Okamoto is famous for trying out new materials and techniques in each of his films. The figures in this series are formed by yarn (毛糸/keito) and shot on the painted glass of an animation table. The animation table has multiple layers of glass and scenes are shot from above looking down. Yarn is not an easy material to use in stop motion animation because it doesn’t hold its shape exactly and it blows away easily, so Okamoto’s animation team painted thin wires to match the yarn and inserted them carefully into each strand to allow for the fixing of shapes. Additional effects, such as the rippling water in Ie de (At Home) where painted onto a second layer of glass.


The charm of these shorts cannot be overstated. They are appealing both to the young children who make up their target audience and to parents. They would not be out of place if used as shorts during the the NHK children’s program Inai Inai Baa (Peek-a-Boo), which also hires contemporary animators like Maya Yonesho to do appealing little artistic shorts. Unlike the kind of short tales I remember seeing on TV as a kid, these films are not educative in the sense of teaching morals. Rather, they are slice of life pieces that point out the slight embarrassments and small joys that are a part of growing up. For instance, Ie de shows a young child arguing with his mother. In anger, he runs away from home swimming upstream. When he runs out of energy he falls asleep and the stream’s current brings him back home again into the embrace of his father. In the title film Are wa dare? (Who’s that?), a pair of fox siblings are out for a walk with their older sister (see image at top of post). They spot many different creatures along the way, asking their sister repeatly ‘Are wa dare?’ The older sister answers their questions confidently and patiently until a boy fox on a bicycle cycles by. When the younger siblings ask ‘Are wa dare?’ this last time, the older sister can only blush because, as the female narrator tells us, she has a crush on the boy.
The shorts are titled as follows:
1. いえで (At Home)
2. べんきょう (Study)
3. たんうきのかさ (Tanuki Umbrella)
4. ネコとネズミ (Cat & Mouse)
5. くまおじいさん (Grandpa Bear)
6. ながれぼし (Shooting Star)
7. キツツキ (Woodpecker)
8. やま (Mountain)
9. あれはだれ (Who’s that?)
10. おかあさん (Mother)