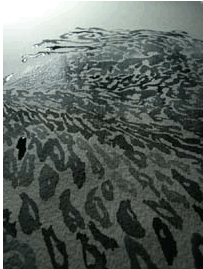 Artists Takashi Ishida (石田高志) and Yuki Kawamura （河村勇樹）are being featured as part of a Projection Series at the Musée d'art contemporain de Montréal from January 14th until March 15th. The Project Series seeks to feature artists who represent a wide variety of aesthetic and cultural backgrounds including video artists, photographers, playwrights, choreographers and composers. The series explores the poetic relationship these diverse artists have with images projected onto a large screen. The artists all have in common the fact that they all live outside the counties in which they were born: Mariana Vassileva was born in Bulgaria but has lived in Berlin)since 1991, Kelly Richardson is a Canadian living in England, Yuki Kawamura has been living in Paris for a number of years and Takashi Ishida is currently based in Toronto.

Here are the bios of Ishida and Kawamura excerpted from the museum's website:

Takashi Ishida and Yuki Kawamura were both born in Japan, Kawamura in Kyoto in 1979 and Ishida in Tokyo in 1972. Both steeped in Japanese culture, they each nevertheless left home to pursue their commitment to art in another country. Ishida now lives and works in Toronto; Kawamura chose to complete his studies at the École supérieure des Études cinématographiques in Paris, where he still lives.

Takashi Ishida began to paint at the age of fourteen, and his originality and artistic integrity were recognized at once. In 1995 he began to make films. He made his name with Gestalt, a 16-mm film shot in 1999 which he created by taking image-by-image photographs of his own paintings. He also used the traditional Japanese roller for painting, a method that enabled him to analyze the time required for the image. In 2001, he shot the 19-minute film

Art of Fugue with the idea of transforming sound into image. Art of Fugue reveals his entirely personal way of understanding and analyzing music. Takashi Ishida has also been presenting live painting performances since 2001.

After studying French at the Kyoto University of Languages, Yuki Kawamura continued his studies in film in Paris. A visual artist and filmmaker, Kawamura also creates performance art and is involved in the electronic music scene. Since 2005, while continuing to make numerous videos, he has produced three short films that demonstrate his interest in stories and in narrative film in general. His videos since then have become spaces of pure creation. Kawamura composes fleeting, floating images that mingle nature and dreams, elusive thoughts and poetry.