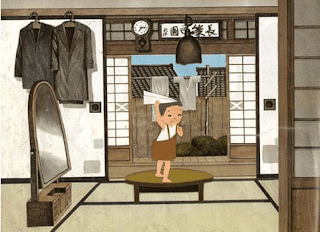 This month marks the 12th anniversary of the passing of independent animation pioneer Renzō Kinoshita (木下蓮三, 3 Sept. 1936 - 15th January 1997). Kinoshita, along with his wife and collaborator Sayoko (木下小夜子, b. 1945) made a number of internationally acclaimed films together and were the founders of the biannual Hiroshima International Animation Festival.
Kinoshita grew up in Osaka where, according to an interview with Sadao “Miyasan” Miyamoto (宮本貞雄), he did his training at a small animation studio. Later Miyamoto and Kinoshita would both work together on the Astro Boy series at Tezuka’s Mushi Productions in Tokyo. However, unlike Miyamoto, who would continue in mainstream animation (working on Gatchaman and later at Disney), Kinoshita grew weary of the constraints of commercial animation. He founded his own animation studio Studio Lotus (スタジオロータス) in 1967. I imagine that the name of the studio derives its inspiration from the kanji “ren” in his given name, which means “lotus”. In 1969 Sayako, whom Kinoshita had met at Mushi Pro, joined the production team at Studio Lotus, and they married soon after.


Kinoshita became well known in Japan in the late 1960s when he developed the character Geba Geba Ojisan (ゲバゲバおじさん) for the popular television series Kyosen x Maetake Geba-Geba 90-pun! (巨泉×前武ゲバゲバ90分!) on Nippon Terebi. This included a series of comical shorts as well as creating comedic sequences in which Geba Geba Ojisan interacts with the actors themselves. The history of using live action people in combination with animated characters dates back to the earliest animated films with Winsor McCay’s early short film Gertie the Dinosaur (1914) showing McKay interacting with Gertie. The comedic possibilities of live animation together with animation were proven by the popularity of Disney’s Alice Comedies in the 1920s. In this sequence from a Geba Geba Best Selection episode, Kinoshita has animated a dance sequence with the Geba Geba character and an actor in a style reminiscent of Gene Kelly dancing with Jerry Mouse in Anchors Aweigh (1945).

Along with his work for Nippon Terebi (ie. Karikyura Machine) in the 1970s, the Kinoshitas produced commercials in order to fund their most important work: the independent films. The first film that the couple made, with Sayako taken charge of the planning, scripting, animation, and production with Renzo did the key animation and direction, was Made in Japan. The film is a tongue-in-cheek criticism of post-war Japan and it won the Grand Prize at the New York International Film Festival. The Kinoshitas were buoyed by their success with the film abroad, and thought they could continue making such independent films back in Japan, but found little support for independent filmmakers at the time. This inspired them to focus not only on their own creative initiatives but also on fostering an independent filmmaking community in Japan.

Their most powerful and influential film by far is Pica-don (ピカドン, 1978) a depiction of the bombing of Hiroshima. This film for me sums up the unique ability of animation to depict what would have been impossible to depict in a documentary film: the true horror of that fateful day in August 1945. Pica-don and Isao Takahashi’s Hotaru no Haka (火垂るの墓/Grave of the Fireflies, 1988) are the most powerful anti-war films that I have ever seen.

Miyamoto on Pica-don: “. . . I was born in Hiroshima and experienced the bombing as a child and saw the mushroom cloud. I never talked about what I saw or experienced to Renzo, but what he depicted in his film was so true to life: the bomber flying over, the blue sky, and the smoky part; I was just absolutely flabbergasted at how real Renzo's image was; it was exactly like what I actually saw. It was funny, because as fellow animators, we would always discuss what we're working on, what are our new ideas. But that was one film that we never actually talked about. If we did talk about it, I would have described it vividly, because as an animator you're able to describe things that way. But in spite of that, Renzo captured it all.”

Click here to see Pika-don in the middle of a clip from a French television documentary on Japan. This clip also features an interview with Sayoko Kinoshita.
To honour Kinoshita’s commitment to independent animation and animation as a medium for bringing awareness to social causes such as world peace and understanding, the Hiroshima festival awards the Renzō Kinoshita prize biannually. This year the prize went to Izabela Plucinska’s film Breakfast (Poland/Germany, 2’17”). Past winners of the prize include Nicolas Jacquet for L’Aren (France, 1998), Eugene Fedorenko and Rose Newlove for Village of Idiots (Canada, 2000), Rosana Liera for The Fish Hunters (France, 2002), Chris Landreth for Ryan (Canada, 2004), and Simone Massi for The Memories of Dogs (Italy, 2006).
It really is a shame that Renzō Kinoshita’s work has not yet been released on DVD in Japan or abroad as far as I have been able to deduce. His work, particularly Pica-don, should be a standard part of animation studies curriculum. In fact, information on Kinoshita is rather sparse on the internet. The filmography below has been put together from detective work on English, French, German, and Japanese websites. I am trying to make as complete a filmography as possible, so please post a message here if you know any other titles to add.
Filmography