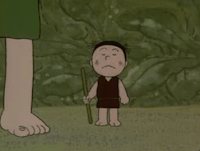 This version of the traditional Japanese folk tale Issun Boushi (Inch-High Samurai) was broadcast on the 12th of February 1993 on TBS. It is episode 921 of the long-running Manga Nihon Mukashi Banashi (まんが日本昔ばなし) series, which was digitally re-mastered in 2005 for rebroadcast due to popular demand.
Issun Boushi was directed by Teruhito Ueguchi (上口照人), the chief animator for the Manga Nihon Mukashi Banashi series. Other episodes of this highly influential animation series were directed by the leading animators of the time (1975-1995) including the legendary Gisaburo Sugii, Tsutomu Shibayama, Rintaro, and Tetsuo Imazawa, among others. For more information on the series itself, see this 2006 piece on anipages. 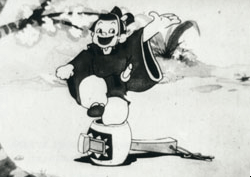 The tale of the tiny samurai, Issun Boshi, has been around for many generations. The earliest animation of it that I know of is a silent black and white version called Issun Boushi: Chibisuke Monogatari (Mitsuyo Seo/瀬尾光世, 1935). It’s a lyrical little piece that draws heavily on the character style and humour of early Disney animation (and is available on Digital Meme’s 4-DVD Japanese Anime Classic Collection). The story has been animated numerous times over the years, with the most recent (that I know of) being an edgy new interpretation animated on 16mm by Keiichi Tanaami and Nobuhiro Aihara.

Ueguchi’s Issun Boushi gives a traditional “Mukashi mukashi” (Once upon a time) interpretation of the tale. Issun Boushi is born to an older couple who live in the countryside. He is hardly as big as a regular-sized person’s finger (aside: which is how he became known in English as the Japanese Tom Thumb... in this animation his height varies by the scene). Despite his small size, Issun Boushi tries to be just like the other boys. One day, he climbs up to the top of the tallest tree and sees that the world is a much bigger place than he had realised. He asks his parents where the big river leads, and learns of the great city of Miyako. Issun Boushi is determined to go to this big city and become a samurai warrior for the royal family that rules from their palace in Miyako.

Armed with a sewing needle as a sword, Issun Boushi uses a miso soup cup for his boat and a chopstick for his oar and sets off on his long and perilous journey.

Once safely in Miyako, he offers his services to Haru no Hime-sama (the Spring Princess). The first test of his skills as a samurai comes when an oni (red demon) attacks a local village. Issun Boushi joins an expedition of samurai to confront the oni. The oni laughs at Issun Boushi’s small stature and swallows him whole, but Issun Boushi pokes at the oni’s belly with his sewing needle sword until the oni spits him out and runs away.

Stylistically, Ueguchi’s interpretation of the story is very pleasing to the eye. He uses a colourful palette suited to the illustration of a children’s story. The town of Miyako, when spoken about by Issun Boushi's father, is shown in vibrant hues to emphasize how exotic it is in contrast to the earth tones of the countryside. Issun Boushi's controntation with the oni and his subsequent romance with the princess takes place while the sakura are in full bloom. Ueguchi's character design was clearly influential enough to have been used in Kodansha’s publication of the Japanese folk tales in a bilingual edition.

Careful attention has been paid to keeping the story as traditional as possible through the use of a narrator, traditional motifs (particularly seasonal motifs like sakura and snow), and traditional framing techniques. The narrator is given a very prominent role in this ten-minute animation. Often his voice is placed over a pan of the landscape with very little action happening at all on the screen. I was reminded by the films of Yasujiro Ozu, which have puzzled many a “western” film critic with his shots of things that seemed irrelevant to the plot of the film, but clearly added to the mood.
The best example of traditional Japanese framing techniques can be seen in the final backwards tracking shot that shows the happy couple not centre stage, as in classical “western” art (Yōga 洋画), but off-centre as part of a larger scene as is typical of Nihonga (日本画) style.

The shorts of the Manga Nihon Mukashi Banashi (まんが日本昔ばなし) series are truly a delight and I hope to have the time to write about more of them in the New Year.