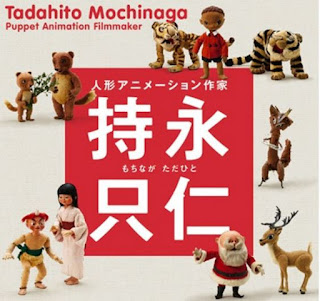 Tadahito Mochinaga: Puppet Animation Filmmaker
人形アニメーション作家 持永もちなが只仁
National Film Center, Tokyo
13 May – 10 September, 2017
http://www.momat.go.jp/english/fc/exhibition/mochinaga/
The National Film Center in Tokyo has been closed for renovations but will be reopening in May.  As part of their celebrations of thecentenary of Japanese animation the museum will feature an exhibition celebrating the career of legendary puppet animation pioneer Tadahito Mochinaga.  The exhibition will start with his contributions to early pre-war anime in Japan, such as assisting Mitsuyo Seo in the production of Ari-chan (1941).  Among his many innovations during the production of this film, he constructed the first multiplane animation table in Japan.

In 1945, Mochinaga moved to China where he set up an animation studio and mentored young artists who would go on to become the top animators in the country.  Upon his return to Japan in 1953, he began producing educational puppet animation shorts.  One of these films, Little Black Sambo (1956) came to the attention of the American film producers Arthur Rankin, Jr. and Saul Bass and led to Mochinaga’s company doing the stop motion for some of America’s best loved television holiday classics such as Rudolph The Red-Nosed Reindeer (1964) and The Little Drummer Boy (1968).

Mochinaga was a mentor to Japan’s puppet animation masters Kihachirō Kawamoto and Tadanari Okamoto, who in turn would inspire a future generations of stop motion animation in Japan.

The exhibition will feature original puppets, drawings, and notes.  There are also film screenings to be held July 22-23, 2017.  More information TBA at a later date.

To learn more about Mochinaga, read:
MOM Productions and the Making of Rudolph The Red-Nosed Reindeer
Rankin/Bass Christmas Specials: Made in Japan
The Little Drummer Boy
Little Black Sambo
Little Black Sambo and the Twins