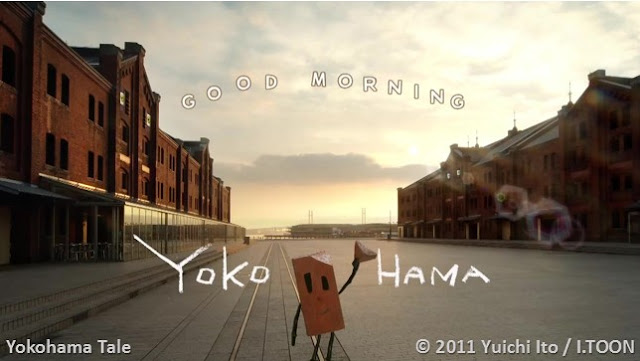 This animated short is an homage to the port of Yokohama by three artists who love the city: the stop motion animator Yūichi Itō (I.TOON), the photographer Hideo Mori (amano studio), and the composer Miyuki Onitake (onitake).  The film consists of three vignettes: “Chat”, “Once Upon a Time in Red Brick Warehouse”, and “The White Seamew”.

With his animated short Harbor Tale (2011), Yūichi Itō brought the buildings of Yokohama to life with his unique mixture of stop motion and computer animation, a technique he dubs Neo Craft Animation.  This follow-up film features the star of Harbor Tale, Mr. Brick, and some of Yokohama’s most famous architectural landmarks.  The Yokohama Red Brick Warehouse (横浜赤レンガ倉庫) historical landmark site is comprised of two red brick warehouses built in 1911 and 1913.  In this first vignette, Mr. Brick watches as the two warehouse anthropomorphise, with windows for eyes, and greet each other. 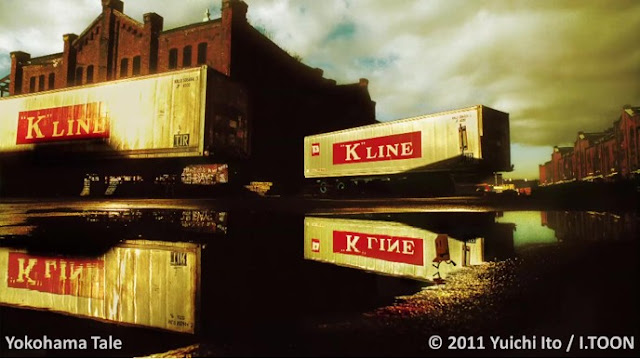 “Once Upon a Time in Red Brick Warehouse”

This vignette opens with an aerial shot of the pier with the red brick warehouses.  As in Harbor Tale, the ships in the harbour anthropomorphise and greet each other as the pass by.  A red brick motif acts as a break between short montages of Mori’s photographs of Yokohama.  Itō’s animation adds surreal touches to the urban seaside landscape such as a shipping container who opens his eyes to look at a passerby and a fish that flies through a rainy sky.  Onitake’s jaunty music keeps the atmosphere light and playful.  Mr. Brick runs through the puddles outside Yokohama Red Brick Warehouse past “K”LINE shipping containers, and inside the warehouse buildings. 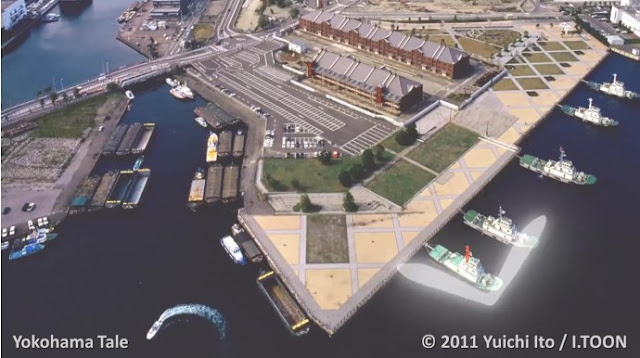 Seamew (also spelled sea mew) is another name for the common gull or mew gull – what the Japanese call kamome.  In Harbor Tale, such a gull played an important role in rescuing Mr. Brick from a precarious situation.   This vignette opens with a wide shot of Yokohama Marine Tower (横浜マリンタワー).  As a gull flies towards the tower, the tower comes to life.  A flock of gulls flies by the tower, transforming from clay figures into white, transparent shapes.    A lone gull flies over the cityscape of Yokohama and them through beautiful photographs by Mori of the harbourfront area.  Onitake’s lyrical music combined with the repeated close up on the “face” of the anthropomorphised Yokohama Marine Tower suggest that this is the tower’s dreamy, romantic vision his surroundings.  Fireworks appear in the skyline and the film ends with a beautiful shot of Yokohama at night.

The screening of this film at Nippon Connection 2015 was sponsored by the Yokohama City Frankfurt Representative Office, with additional support from the Department of International Affairs of the City of Frankfurt, JFE Engineering Europe GmbH and the ramen restaurant Muku in Frankfurt.