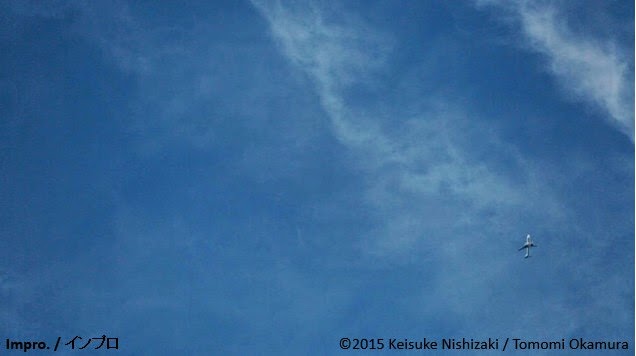 In the heart of Tokyo, a crew is setting up for this unusual shoot.  Gear is unpacked from the back of a car, and a kitchen space with a hardwood floor is temporarily cleared of its clutter.  Meanwhile, microphones and cameras are set up outside.  Make-up is applied to the dancer (Masumi Endo).  Traffic noise and the sounds of nature are caught on the microphones outside.

With the space clear, and the performer ready, the sound of a dripping tap (shown in close-up) gives the opening beat for the improvisational dance performance to begin.  The sounds of Tokyo: crickets, jungle crows, whirring of a Japan post motorcycle, latches and windows opening, a gas stove-top being lit, footprints, become the soundtrack to which the dancer dances.

Although the film is called Impro. (short from improvisation), and gives the impression that the dancer is responding to live sounds (cars starting, traffic signals, shop workers’ greetings, trains, etc.) as the sound crew travels the city streets, this is clearly a planned and edited production.  It gives the impression of the dancer responding spontaneously to the sounds of the city, but this is a carefully woven illusion.  The result is an ode to a day in the life of Tokyo, from dawn to dusk, with the dancer working herself up into a crescendo of as the sounds of night life increase.  Finally, a moment’s respite.  A new day dawns on the green space next to a river, the dancer pauses to catch her breath.  A living, breathing member of this vibrant community.

Impro. was co-directed by Keisuke Nishizaki (西崎啓介) and Tomomi Okamura (岡村知美) of Tokyo Eizo Brig. (東京映像旅団).  Both graduates of the College of Art at Nihon University, Nishizaki is a director, illustrator and animator while Okamura calls herself an independent motion graphic director.  Learn more about them on tumblr.

This film screened at Oberhausen 2015.