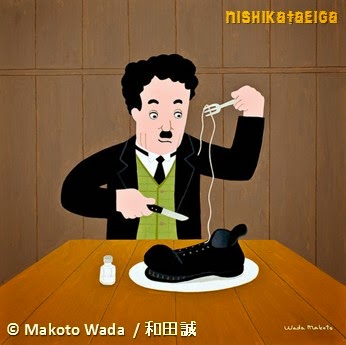 Makoto Wada (和田誠, b. 1936) is best known as an illustrator whose work has adorned the book covers and pages of writers as diverse as Shinichi Hoshi, Haruki Murakami, and Agatha Christie.  In addition to illustration, he has also dabbled in film directing and animation – winning the Noburo Ofuji Award for 1964 for his comic animated short Murder (殺人).  In Murder, he spoofs a wide variety of famous film and literary icons including Poirot, Sam Spade, Dracula and James Bond.  He has also done a range of paintings inspired by film stars and classic movies.  This is my first in a series of posts looking at his art and his muses.  You can support this artist by ordering collections of his work such as: 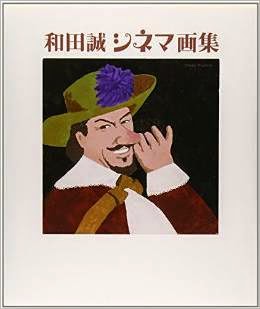 Charlie Chaplin is a popular subject in Wada's work.  This is the classic scene in The Gold Rush (1925) where the Tramp boils and eats his shoes, imagining that the shoelaces are spaghetti.  As is typical of Wada's style, he simplifies the background in order to put the emphasis on the central character and themes of the scene.   Makoto Wada is known for his love of colour, and I like his choice of green for the Tramp's vest.

This is the final scene in Chaplin's City Lights (1933) when the Tramp finds the Flower Girl again and discovers that she has regained her sight.  She does not recognize him at first and offers him a flower and a coin.  When he grabs her hand, she suddenly realizes that he is no stranger.  It's a moving scene that leaves audiences wiping a tear from their eyes every time.  The colour palette  of Wada's interpretation emphasizes the whiteness of the flower, and the blondness of Virginia Cherrill's hair - the latter of which we only get a notion of in the black and white film. 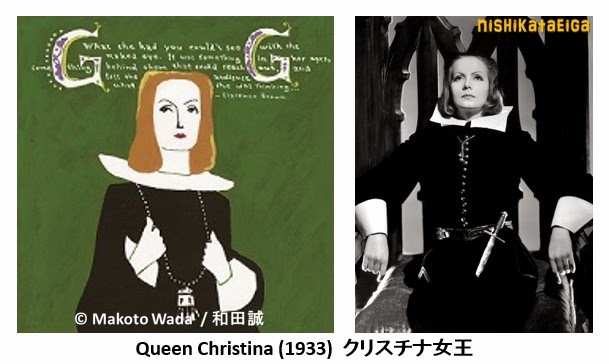 Wada captures Greta Garbo's austere regalness in her iconic role as Queen Christina of Sweden in Rouben Mamoulian's critical and financial hit for MGM studios.  He's got the Garbo Look just right by capturing the arc of her eyebrows. 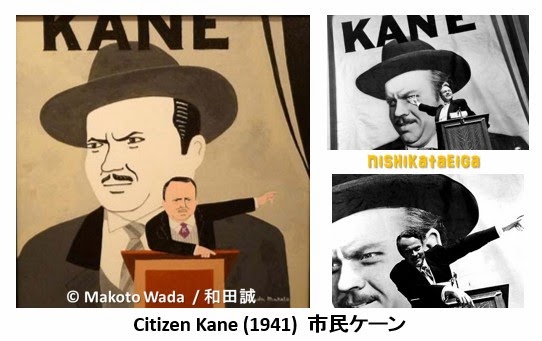 I was amused by how fat Orson Welles' head is in Wada's interpretation of this iconic image from Citizen Kane, because I didn't recall Welles looking so fat-headed in this scene.  But then I discovered that some stills of this scene do make his head extraordinarily large.... and of course Charles Foster Kane was indeed getting progressively big-headed throughout the film in the figurative sense.

The Puerto Rican singer and actor José Ferrer is not as well-known today as many of his contemporaries (Bogart, Peck, Wayne, Tracy, Stewart), but he was a superstar in his time, winning the Tony in 1947 for playing Cyrano on Broadway before going on to win an Oscar and a Golden Globe for this screen portrayal.  Ferrer was the first Hispanic to win an Oscar.  To hear him in action, his best Cyrano speeches are available on iTunes.  He is arguably the top English Cyrano of the 20th century.