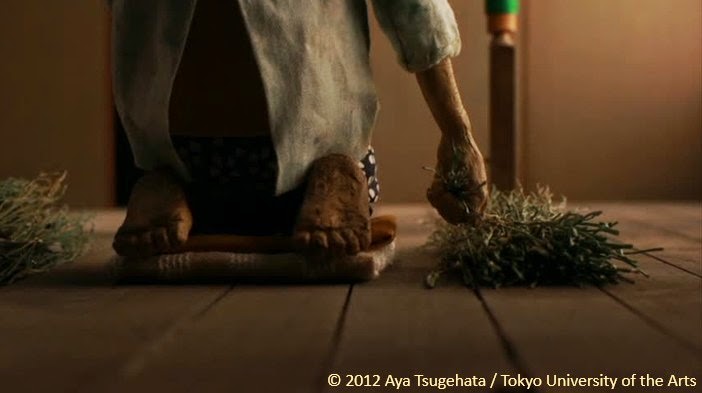 When I first moved to Japan from Canada in 2000, I was struck by the prevalence of traditional brooms made of straw or reeds used not only in homes but by city workers cleaning the streets.  Called “hōki” (箒/ほうき), hand-made brooms of bamboo reed and millet straw are considered the best way to clean tatami mats.  Due to modernisation, broom-making workshops have become rarer, but there are still many people who continue this traditional handicraft.  In her graduate film from Tokyo University of the Arts (Geidai class of 2012), animator Aya Tsugehata chose the setting of a traditional broom-making workshop. 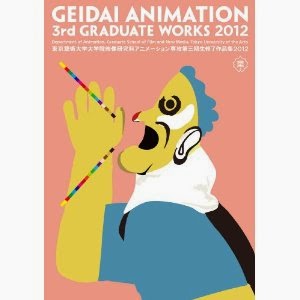 Order Geidai Animation 2012
The Sakuramoto Broom Workshop (櫻本箒製作所 / Sakuramoto Hōki Seisakusho, 2012), like Tsugehata’s first year Geidai film Imamura Store (今村商店 / Imamura shōten, 2011) – click here to read my review of it – is based on a real space and the artisans who work and live there.  In fact, at Nippon Connection 2013, Prof. Mitsuko Okamoto described Tsugehata’s puppet animation as examples of “animation documentary” because of her use of documentary recorded sound.  The Sakuramoto Broom Workshop is based on the workshop of the same name which is run by the elderly couple Kakutarō and Setsuko Sakuramoto.  There is no dialogue in this film, but the sound effects were recorded in their workshop as well as in Murai’s Broom Works and Yoneda’s Broom Shop.

The age of the Sakuramotos is established before we even see Tsugehata’s puppets of them by a series of shots showing the absence of modern conveniences in the workshop.  An ancient electric stand-alone electric heater, a traditional tray bearing tea for two, a pair of zabuton (floor cushions) are the meagre creature comforts in this traditional Japanese space.  Outside, brooms lean against the building, drying in the sun.  Inside, the husband and wife face each other on the barren wood floor, kneeling on zabuton as they work.  The wife makes small bundles of straw, tightening them with a rope and tying them together with a short piece of wire.  Her husband then takes these bundles and weaves them into the shape of a broom using thread to bind them.

There is a sense of harmony between these two individuals and one senses that they have sat here for decades, performing these daily tasks.  They work with the ease and steadiness of experts, until the husband notices a subtle difference in his wife’s performance.  Glancing down, he notices that one of the bundles is not as neatly done as the others, as if his wife had struggled with the task.  Later that night, the wife wanders out of her bed in their neighbouring home and back into the workshop.  Concerned for her well-being, the husband follows to find her back at work binding straw.  One can deduce from the subtle visual storytelling that the wife is likely suffering from the early signs of dementia.  The film expresses a feeling of melancholy that this couple’s productive life together is entering its twilight years.

Tsugehata’s style of storytelling is reminiscent of that of the legendary filmmaker Yasujiro Ozu in its use of a series of cutaways to tell the story not only of the characters themselves, but also of the Japanese space.  Like Ozu, many shots are taken from a low angle, such as the view of the woman from behind as she kneels on the floor.  I was reminded of Tokyo Story (1953), in particular, in the way that Tsugehata depicts harmony between an elderly husband and wife.  In doing online research for this post, I discovered a short interview with Tsugehata in the run-up to graduation in 2012, where she says that she “finally saw the works of Yasujiro Ozu” in the past year.  There is no context or follow-up question to this, but it suggests that someone must have recommended Ozu to her.  Her first year Geidai film, Imamura Store, was shot in a similar way, but I have not seen any of the work she did as an undergraduate so it is hard to judge if she naturally adopted an Ozu-like aesthetic before seeing his work.  As Ozu’s aesthetic was, for him, a practical response to shooting Japanese spaces, it is highly possible that Tsugehata did the same.  It seems likely that seeing Ozu’s work may have helped her to hone her cinematographic approach to these spaces further.  Tsugehata’s use of puppet animation to record people and spaces from her hometown is certainly unique and I very much look forward to seeing more work from her. 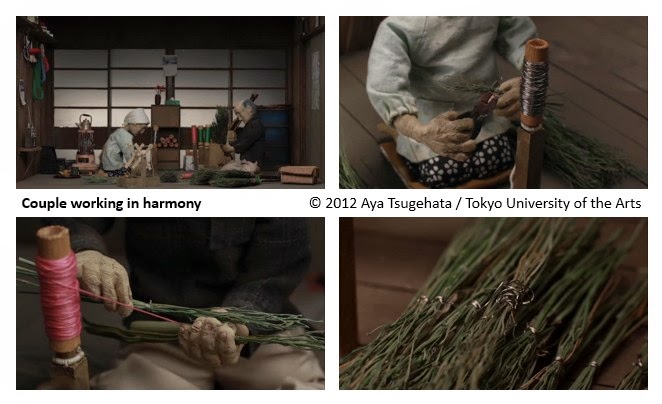 This is an auteurist work in that Tsugehata not only directed the films, but also designed the puppets, sets, lighting, wrote the screenplay, did the cinematography, and edited the film herself.  Music was composed for the film by Keisuke Kimoto and the sound design was by Choi Woong.

Aya Tsugehata (告畑綾, b. 1987) is an up-and-coming stop motion animator from Saitama Prefecture.  She graduated from Tama Art University in 2010 and then continued to develop her puppet animation skills under the supervision of Yūichi Itō (伊藤有壱, b.1962) at Tokyo University of the Arts. This film can be found on the DVD Geidai Animation: 3rd Graduate Works 2012.  See behind-the-scenes photos at the Geidai 03 Talk blog and learn more about traditional Japanese broom-making at Tokyo Chuo Net.