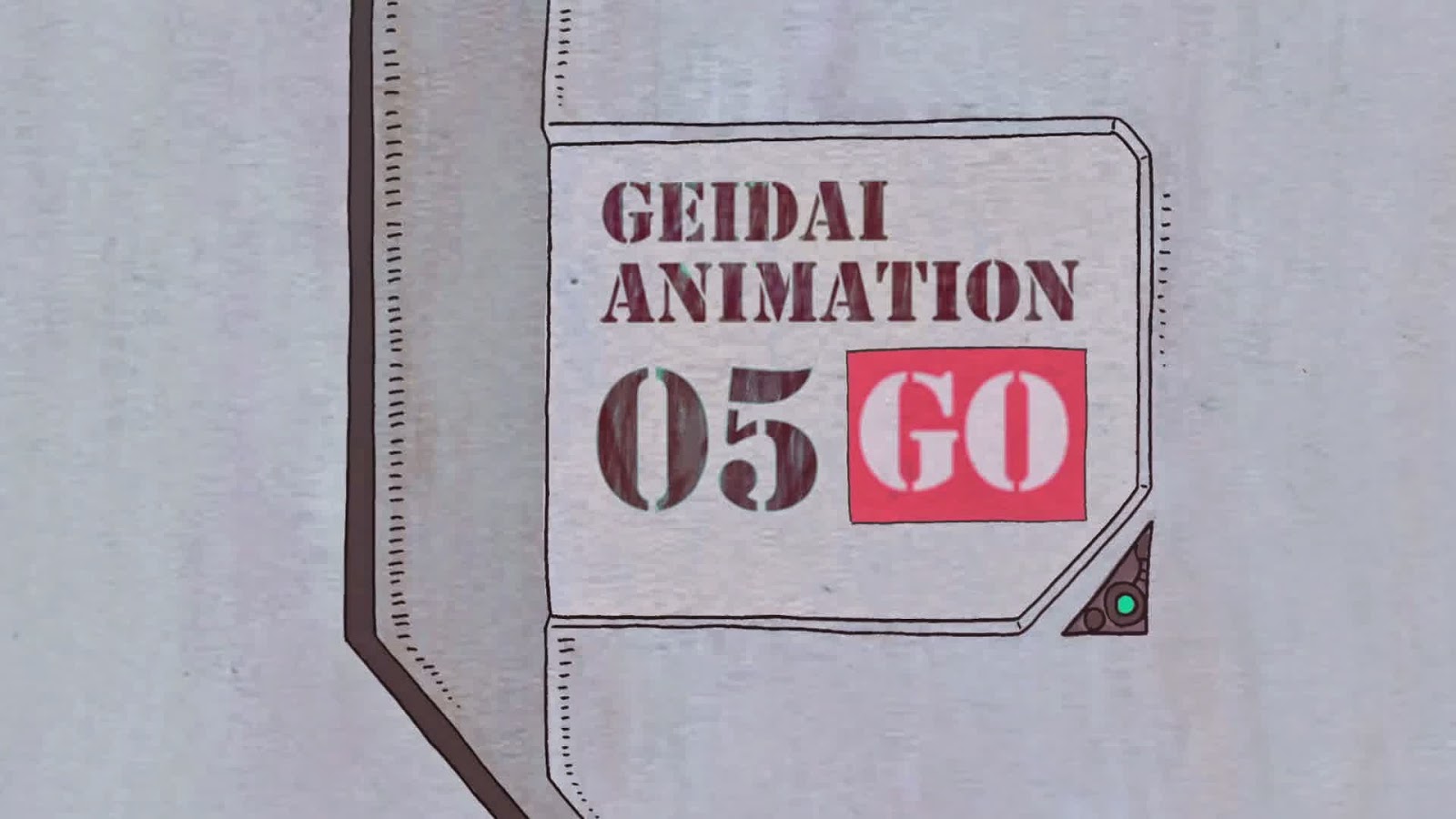 Koji Yamamura’s presentation of a selection of animated shorts by the Tokyo University of Arts (aka Geidai) Animation Department’s graduating class of 2014 at Nippon Connection was sold out – to the extent that festival volunteers were sitting on the steps so that they could watch as well.  Many people on social media have told me that they wish that they, too, could have been there.  Luckily, the Geidai DVD of their 5th year of graduate works is now available to order online. 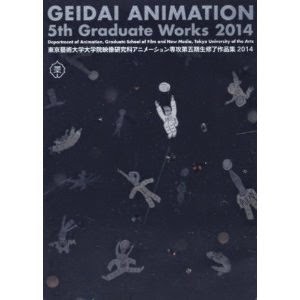 
Once again, Geidai has a diverse group of animators from all over Japan and overseas (China, South Korea).  They also represent a wide cross section of styles including stop motion, drawn, mixed media, experimental, and computer animation.  The standard of animation demonstrated by the Geidai graduates is once again very high.  Two stand outs for me are Yantong Zhu from Nanjing, who in her graduate work My Milk Cup Cow tells a deeply moving personal story (read my review) with beautifully rendered animation, and Yutaro Kubo, whose experimental works Kicking Rocks and 00:08 (8 seconds) fill me with the same kind of excitement I feel when watching Ryan Larkin films (see the NFB website).

This year’s poster and DVD cover art was designed by Yewon Kim, and the opening event trailer is directed by Kohei Takeda.  Unless otherwise noted, all film synopses below are from the DVD booklet.  Bios have been updated with official websites, vimeo profiles, social media accounts, and so on. “The catfish can’t get back to the sea.  A big catfish is stuck on a riverbank, where he lives quietly with a little catfish in a boat packed with memories from back home.” 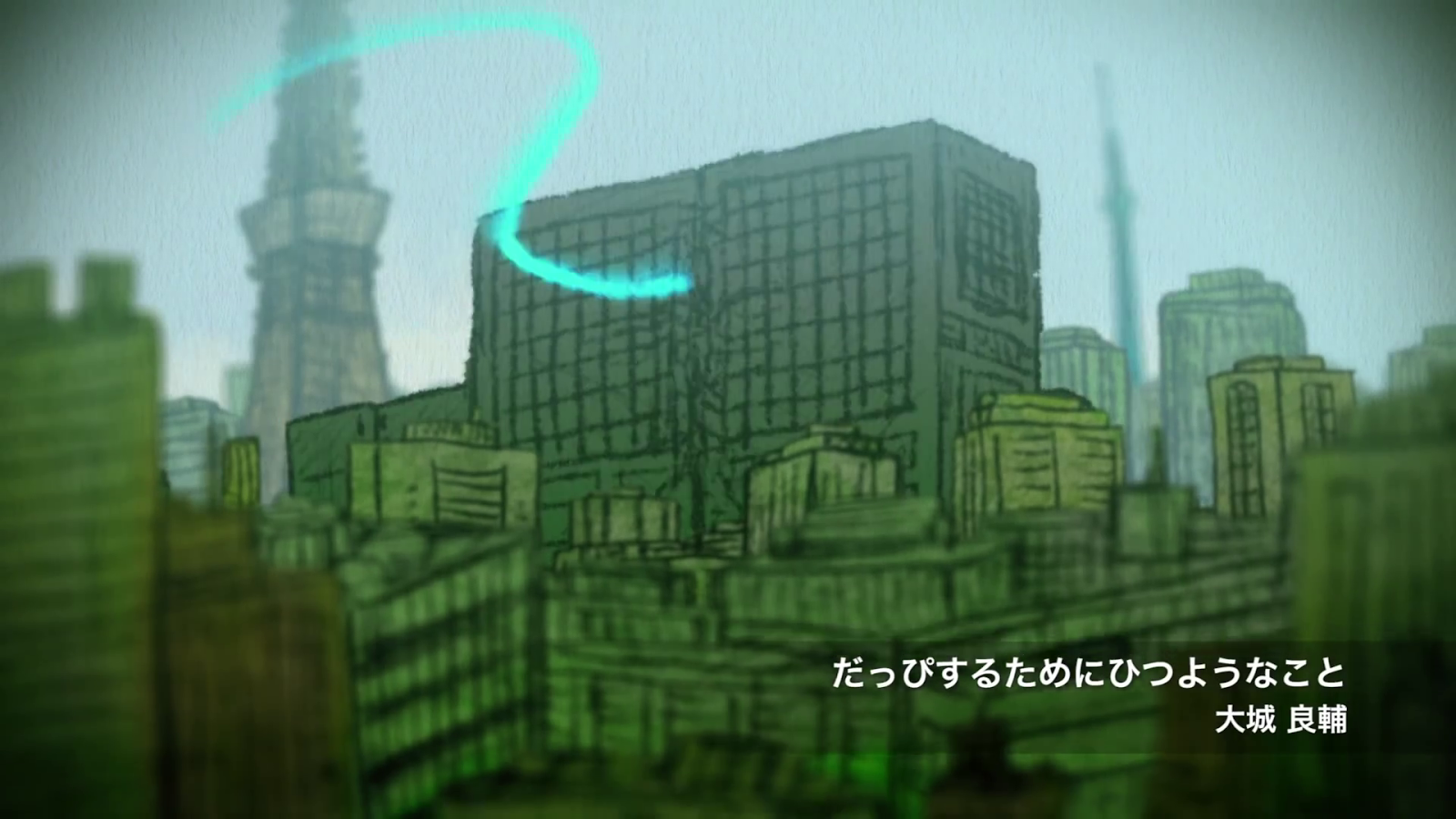 “A middle school boy, who likes to snap photos of things he fancies, and then draws pictures of them.  On his usual route home, he spots the girl he likes with another boy.  The balance between his delusions and reality is in constant flux.”

Ryōsuke Ōshiro (大城良輔, b. 1988) grew up in Okinawa.  He has a degree in Design from Okinawa Prefectural University of Arts and completed his MA in Animation at Geidai in 2014.  Follow him on twitter, tumblr, and youtube. 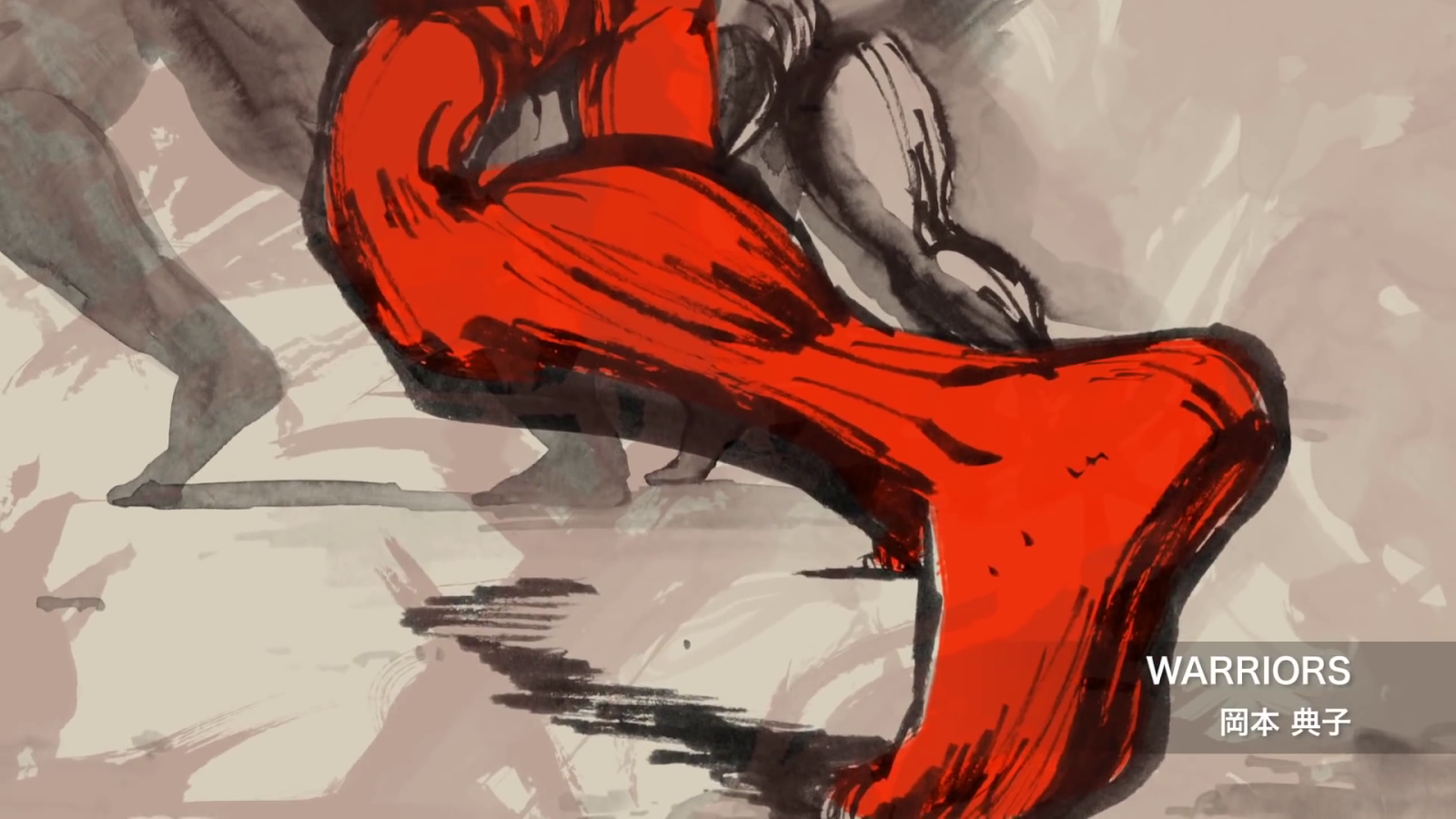 “Men’s muscle, lust for battle, conflict, and the game.”

Noriko Okamoto (岡本典子, b. 1989) is a native of Kyoto.  She has a degree in Animation from the Faculty of Manga at Kyoto Seika University and completed her MA in Animation at Geidai in 2014. 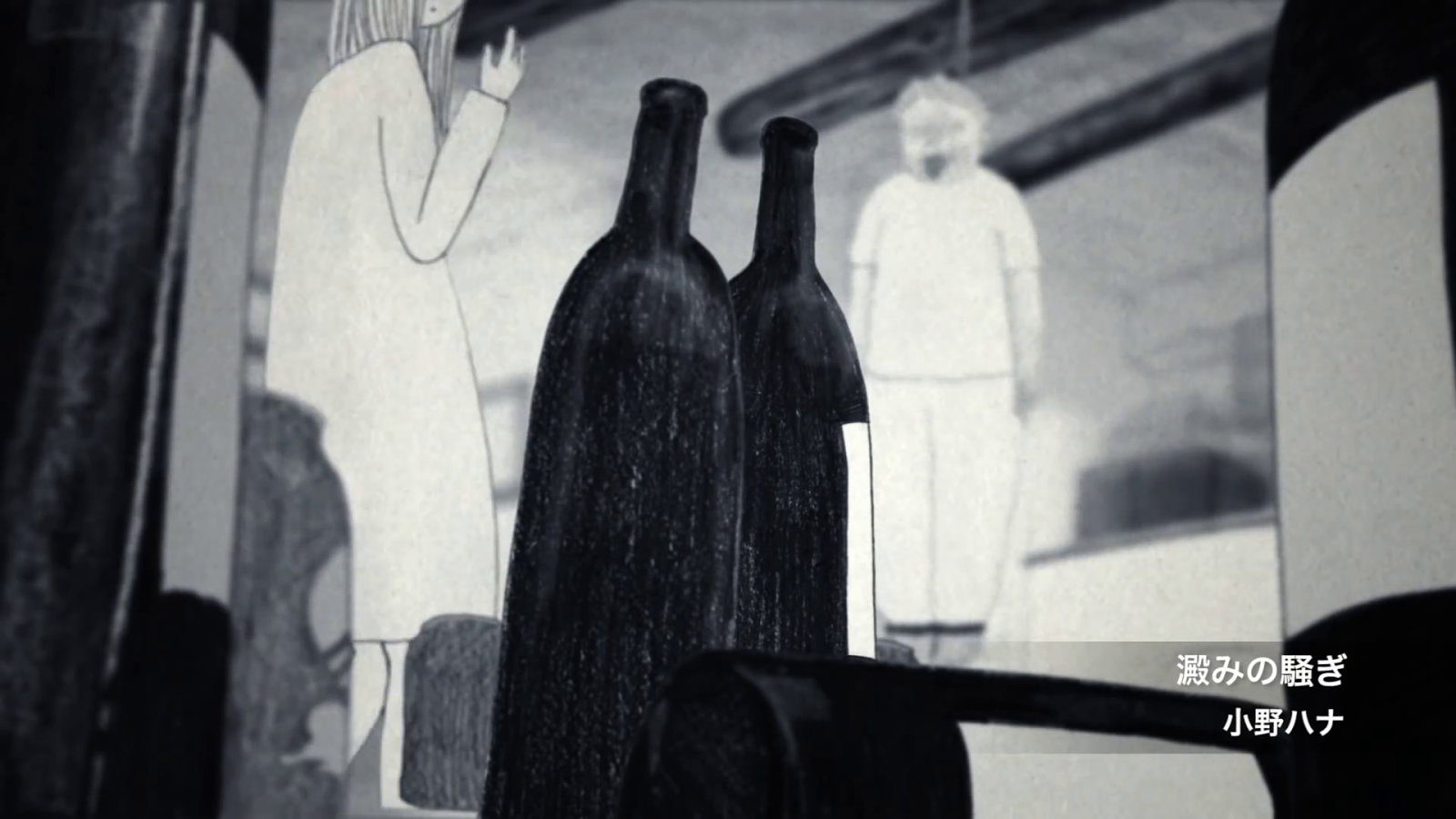 “The two of them, all alone at home. All alone with her father's corpse. Memories, ideals, and reality all sink beneath the muck. Everyone is alone. Everyone is in solitude. “

Onohana (小野ハナ/Hana Ono, b. 1986) is from Iwate Prefecture.  She has a degree in Art Culture from Iwate University (2009) and an MA in Animation from Geidai (2014).  Learn more about her on her official website and follow her on twitter. 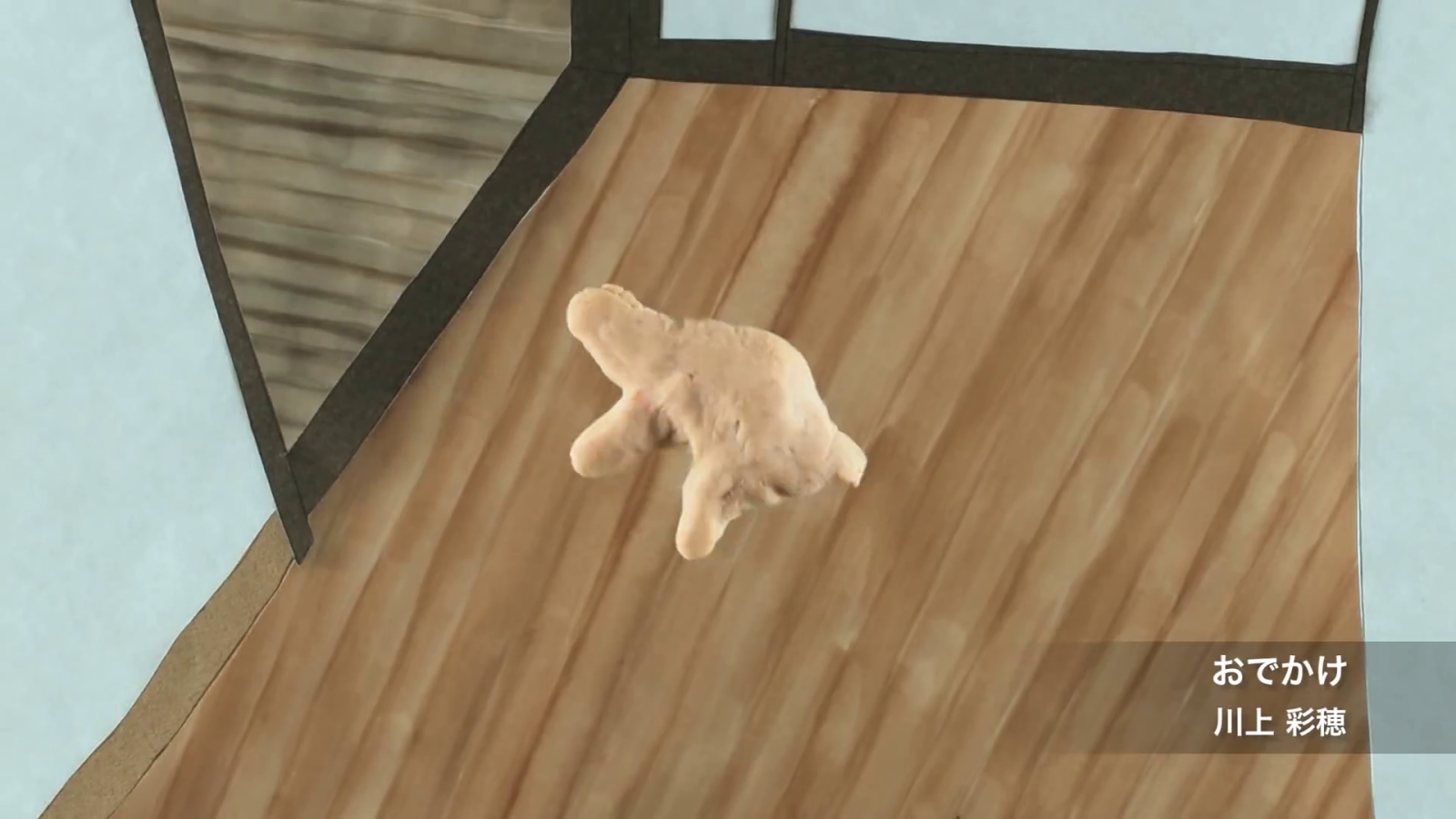 “He lives his life everyday like it's nothing special. Today he eats, gets dressed, and heads out once again.”

Ayaho Kawakami (川上彩穂, b. 1989) has a degree in Ecoregion Science from Tokyo University of Agriculture and Technology and completed her MA in Animation at Geidai (2014).  Follow her on tumblr. 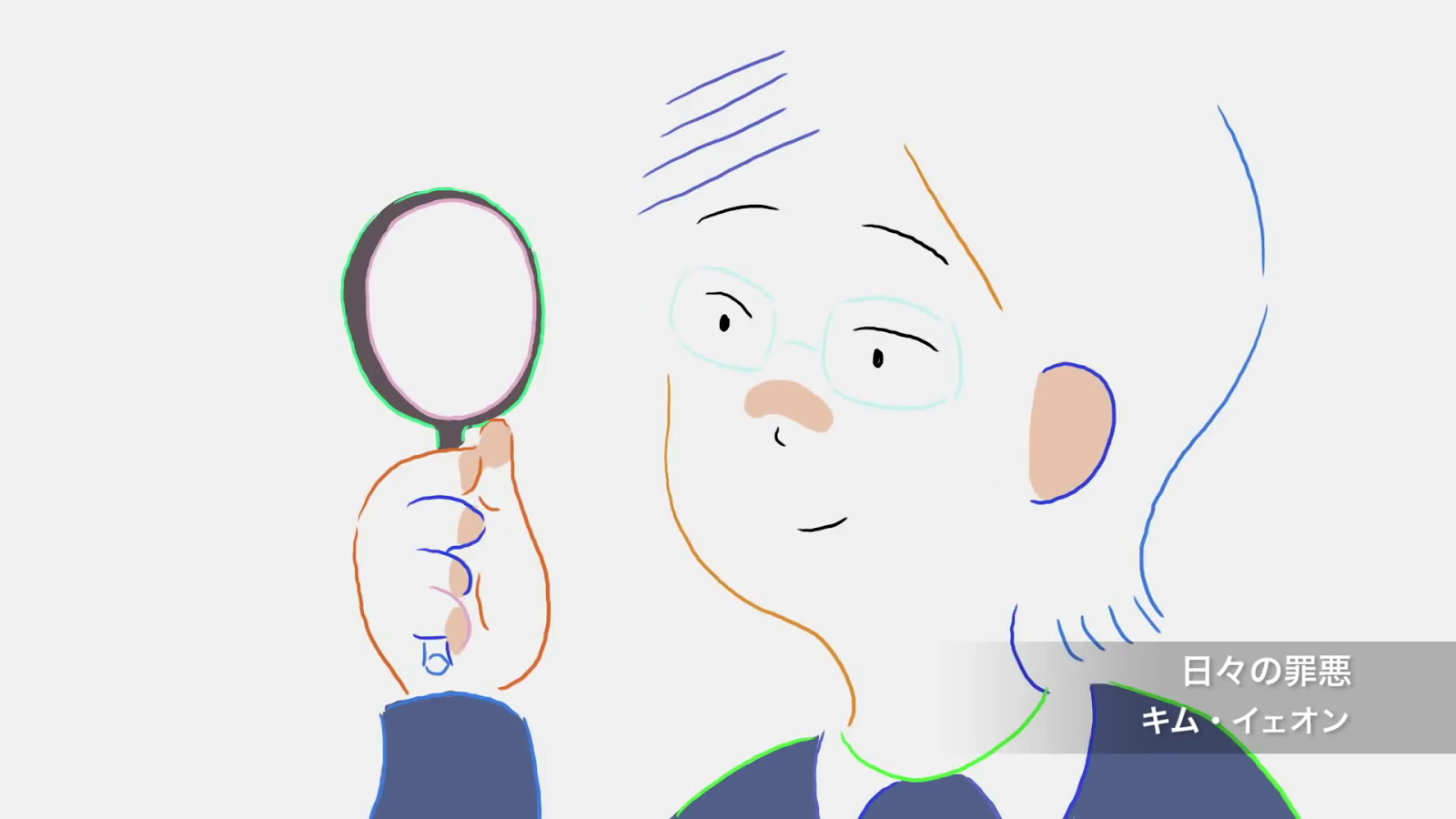 “Guilty is an art university student who is slacking off on her school work and feels horrible about it. Plus, she's confused about her family and Christianity, and she can't even get her ex-boyfriend to accept a small present she bought for him.”

Yewon Kim (キム・イェオン, b. 1988) is from South Korea.  She studied graduated from Korea Animation High School in 2006.  She continued her animation studies with a CA from Tokyo Polytechnic University (2011) before doing her MA at Geidai (2014).  This spring she began sharing her manga on her tumblr OnionSkin Publication.  You can also follow her on twitter and vimeo. 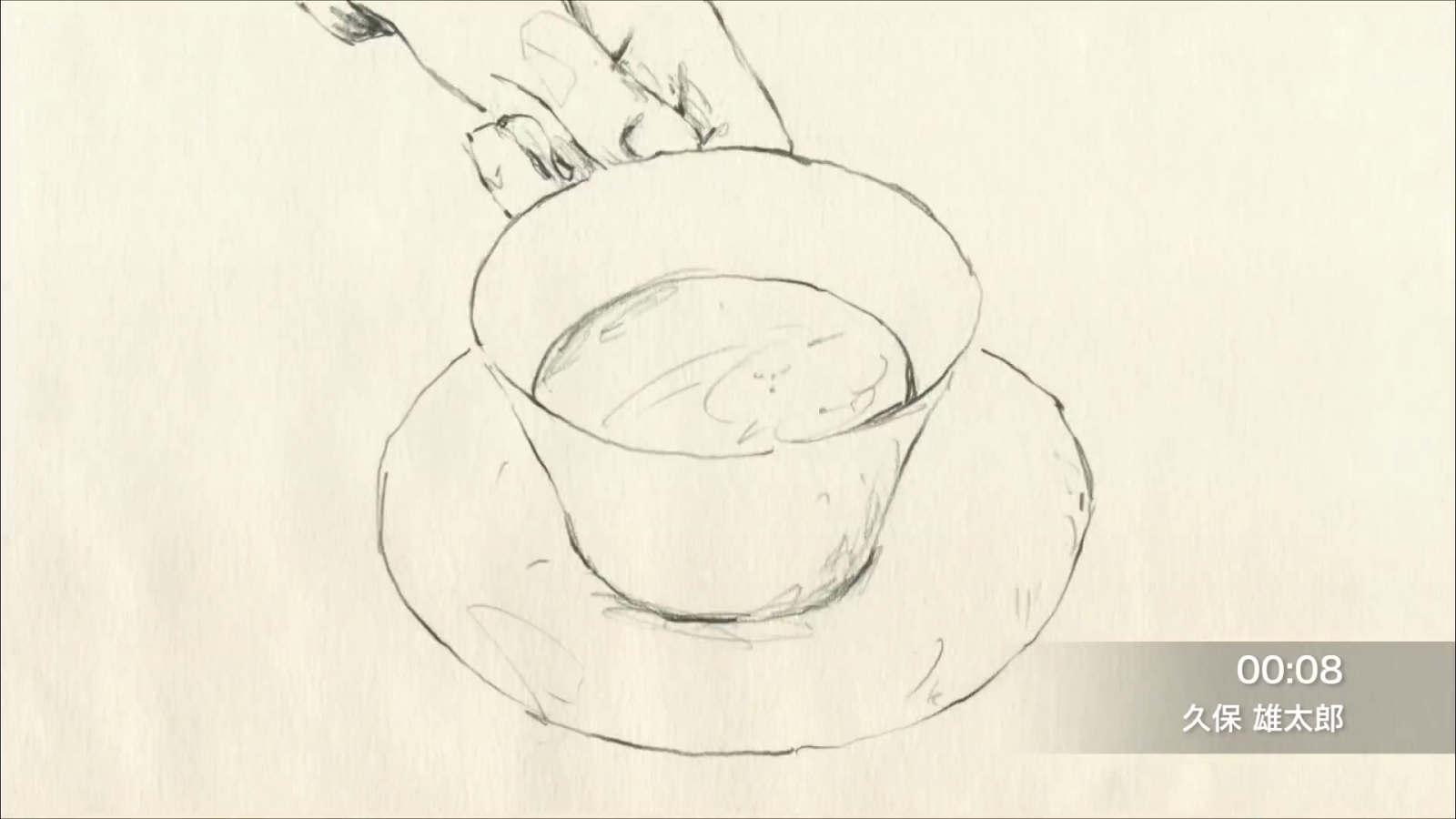 “This piece takes 8 seconds, and creates intervals between the frames, and then makes them bigger. It's about expansion and enlargement, not the passage of time. 8 seconds becomes that much more luxuriant.” 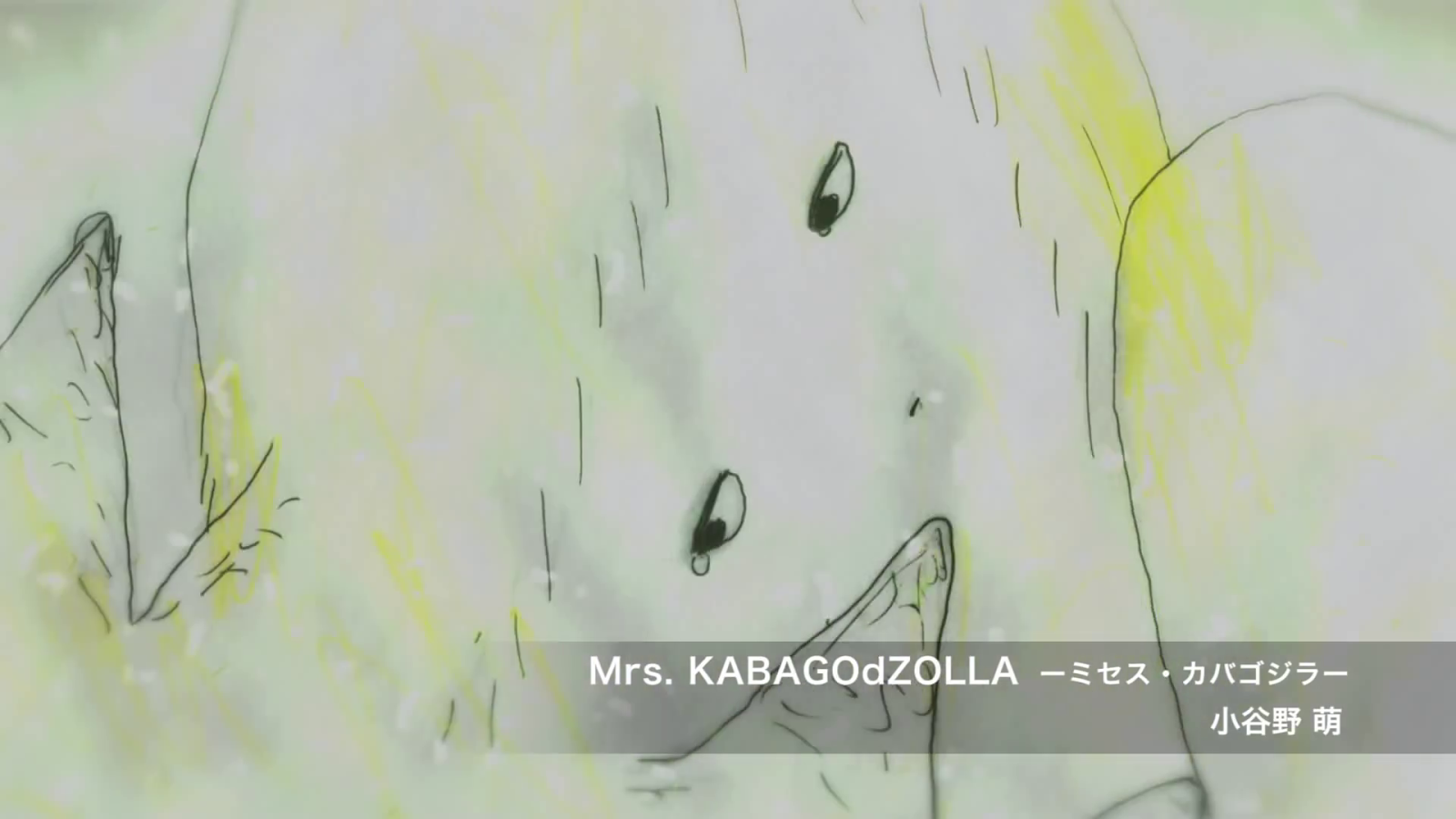 “‘Mrs. KABAGodZILLA had a daughter whose feet and arms looked just like her own.’ Mother and child were always together, but the mother's hospitalization makes the daughter remember the past, and think a little about what lies ahead.”

Moe Koyano (小谷野萌, b. 1989) is a native of Tokyo.  She has a degree in animation from Tokyo Polytechnic University (2012) and completed her MA in Animation at Geidai in 2014.  Follow her on tumblr and youtube. Read my full review of My Milk Cup Cow.

Yantong Zhu (朱彦潼シュ・ゲンドウ, b. 1988) grew up in Nanjing, China and graduated with a degree in Advertising from the Nanjing University of Finance and Economics in 2010.  She completed Geidai’s graduate programme in animation in 2014.  You can follow Yantong Zhu on twitter or vimeo. “PAMON are magical and mysterious creatures who can move the hair on their head however they wish, and communicate using their chest hair. This tale takes a peek at an ordinary day for the PAMON”

Kazushige Tōma (当真一茂, b. 1988) is from Okinawa.  He has a degree in Design and Design Crafts from Okinawa Prefectural University of the Arts (2012) and an MA in Animation from Geidai (2014).  He can be followed on twitter.  Check out his animation and puppets on his official website Nazetaro Web. “The uncertainty, struggles, and joy of the moment upon becoming an adult. Between lullabies and songs I hum to myself. Between a man and myself. That subtle flickering in a single instant, forgotten once it is over.  Never forget that moment. . .”

Saki Nakano (中野咲, b. 1988) is from Gunma.  She graduated from Joshibi University of Art and Design before pursuing her MA in Animation at Geidai.  Follow her on twitter. 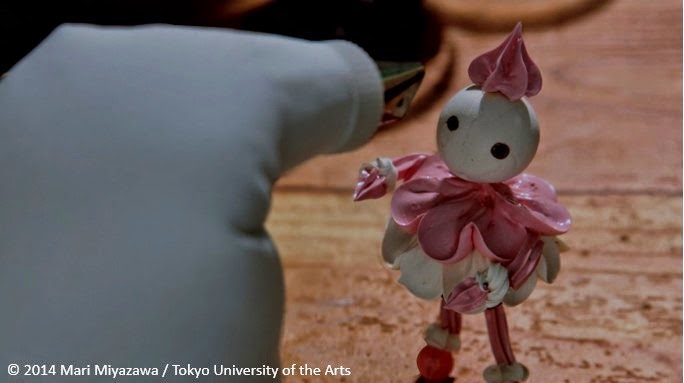 “A quaint kitchen in a house tucked away in the outskirts of the city.  Amidst preparations fo a banquet, the birth of a new life brings turmoil and change.  And then, she heads off on her own journey.  Those who send her off recall the day they embarked on their own journeys, just like her.”

Read my full review of Decorations.

Mari Miyazawa (宮澤真理) is a former graphic designer in the computer games industry.  Since 2002, she has worked as a food blogger and starting in 2007 she began to bring her love of food and animation together.  Check out Miyazawa’s bento tips on her official YouTube channel, follow her blog on food art at http://www.e-obento.com/ and on twitter: @Mari_Miyazawa. 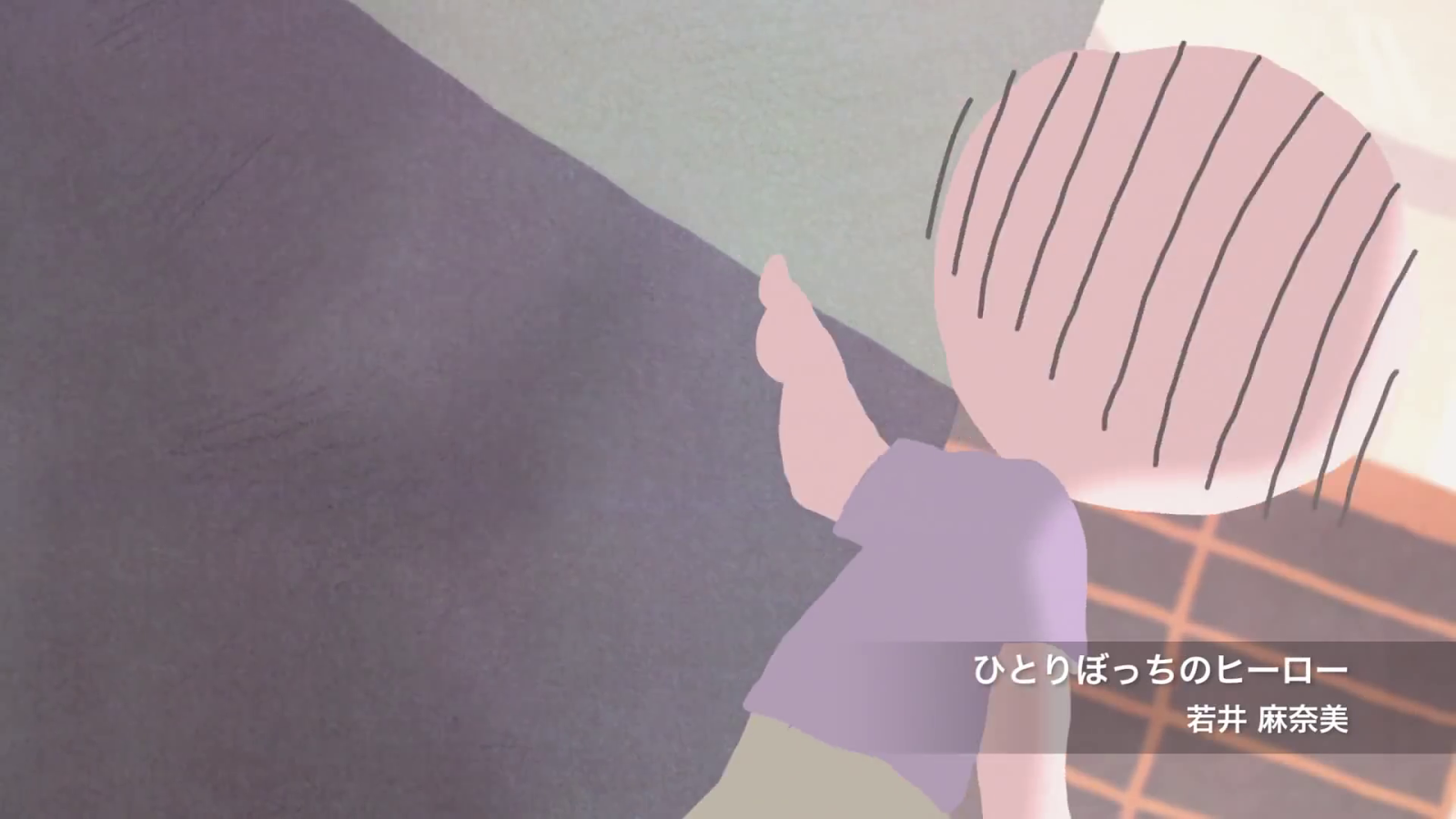 “This is for children who couldn’t be on their own.  And, for the time when you’re older and you’ve forgotten your determination to be on your own.”

Manami Wakai (若井麻奈美, b. 1989) is a native of Kanagawa.  She has a degree in Oil Painting from Tama Art University and an MA in Animation from Geidai (2014).  Follow her on twitter and check out her art on her official website. 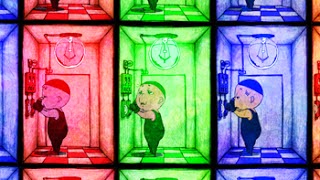 “Dwarfs in red, blue and green colours have been working in each dark cabinet in a factory called television.  They have kept working without questioning their own identities.  Midori, a green dwarf, becomes aware of himself.  .  .” 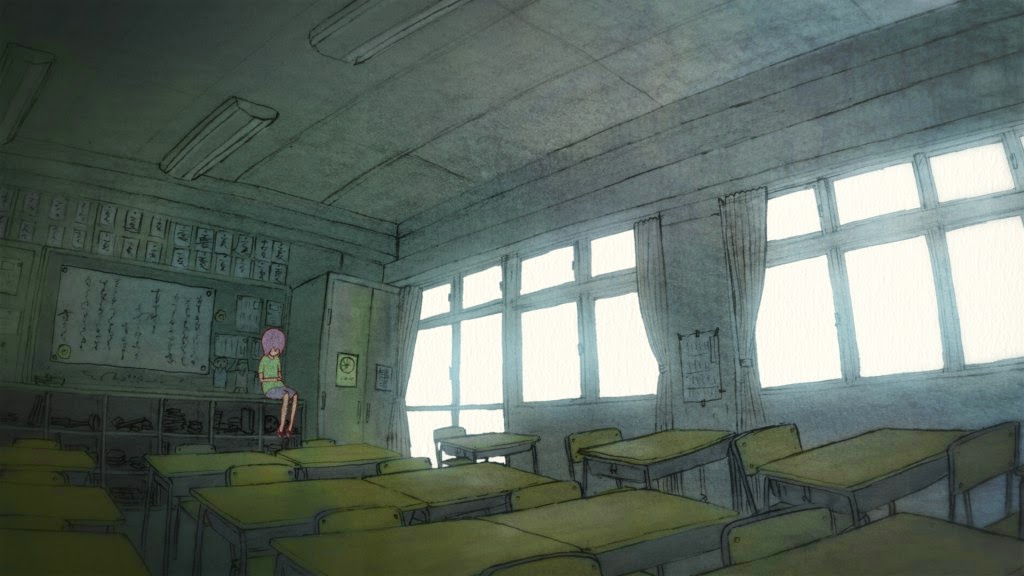 “A boy is always alone, at school, or at home.  One day, he finds a sandlot on the way home and thinks of making a ‘town’ of his own.  Another boy was watching his play and starts to imitate him.” 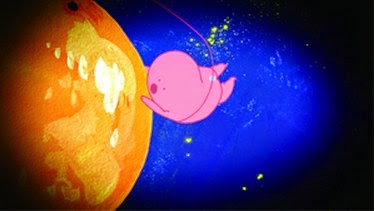 “Mom and Dad imagine their little baby in Mom’s tummy, which is just like a universe filled with amniotic fluid and the baby is having an adventure there.” 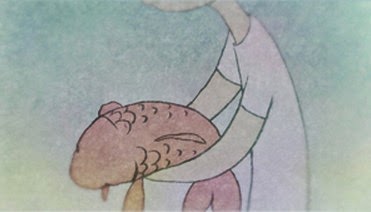 “I want to leave home,” a pet fish told a boy one day.  The boy reluctantly takes the fish out to the sea to ‘keep his promise,’ as it says.  Their recollections on the way became slightly discrepant.” 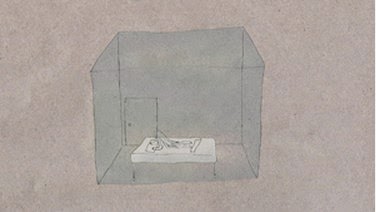 “I get up in the morning, prepare myself, wait for a bus, then the train, go to school, and return home.  Days go by even while I wonder about, cry, or sleep. 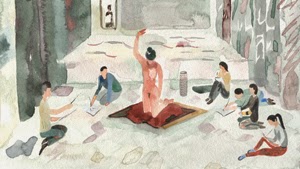 “Suffering from her delusion, K tries to depict her disorder in her paintings.  In her dream, she finds a frame, which makes her believe that drawing is her destiny.” 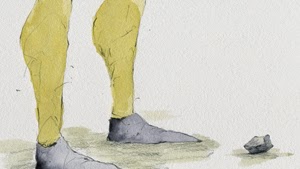 “All of a sudden, a boy starts to play hopscotch.  Kicking stone[s] is.  .  .  simply play, but it doesn’t work as simply as it seems.  He struggles by the rule he made himself.” 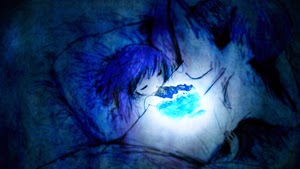 “A spring night, I walked past a ‘god’.  I wonder if it was a cat or a man.  Or was it a wind I felt in a slumber?  They were certainly there, celebrating the cycle of lives in small ways.” 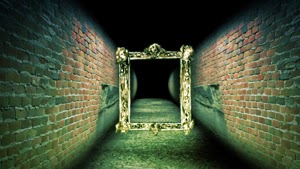 “A man walks.  His form wobbles precariously.  The world is hard to tell subjective or objective.  His body is cut in pieces.  Only the power of image can make these unite.” 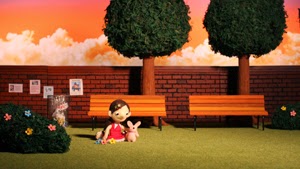 “A girl plays alone in the twilight park.  Unexpectedly there appears a strange cotton candy man who makes magical cotton candies, which transform themselves into various animals and give the girl a happy fluffy moment.” 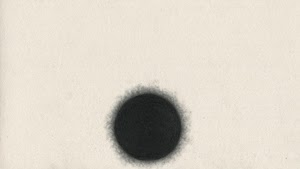 “The theme is ‘one continues to live, leaving his trace.’  It is an abstract animation [in] which movement is done by repetition of pencil drawings and erasure on a piece of paper.” 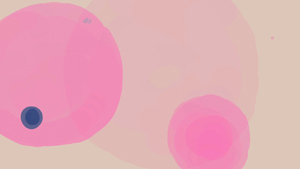 “This animation shows how the liquid in a glass erupts, spreads, mix[es], and overflows.” 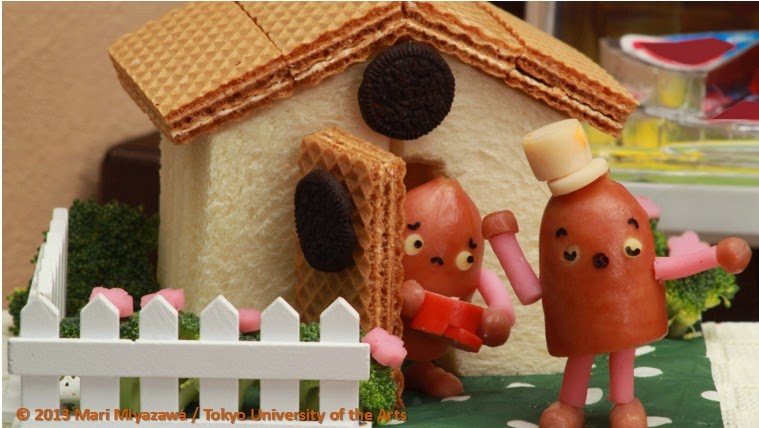 “A magical incident happened in an ordinary bakery while the baker was away for delivery.  That incident made this bakery the best in town.  But it is a secret not to be disclosed.”

Read my full review of Twins in the Bakery. 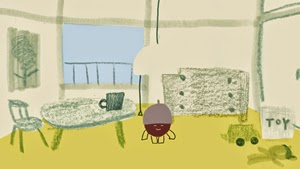 
“The story of Bear, Acorn, Prawn Fritter, and Reading Glasses, or Specs, who live in a flat called Daisy Lodge from summer to a winter morning.  And it continues to someday when we look back today.”