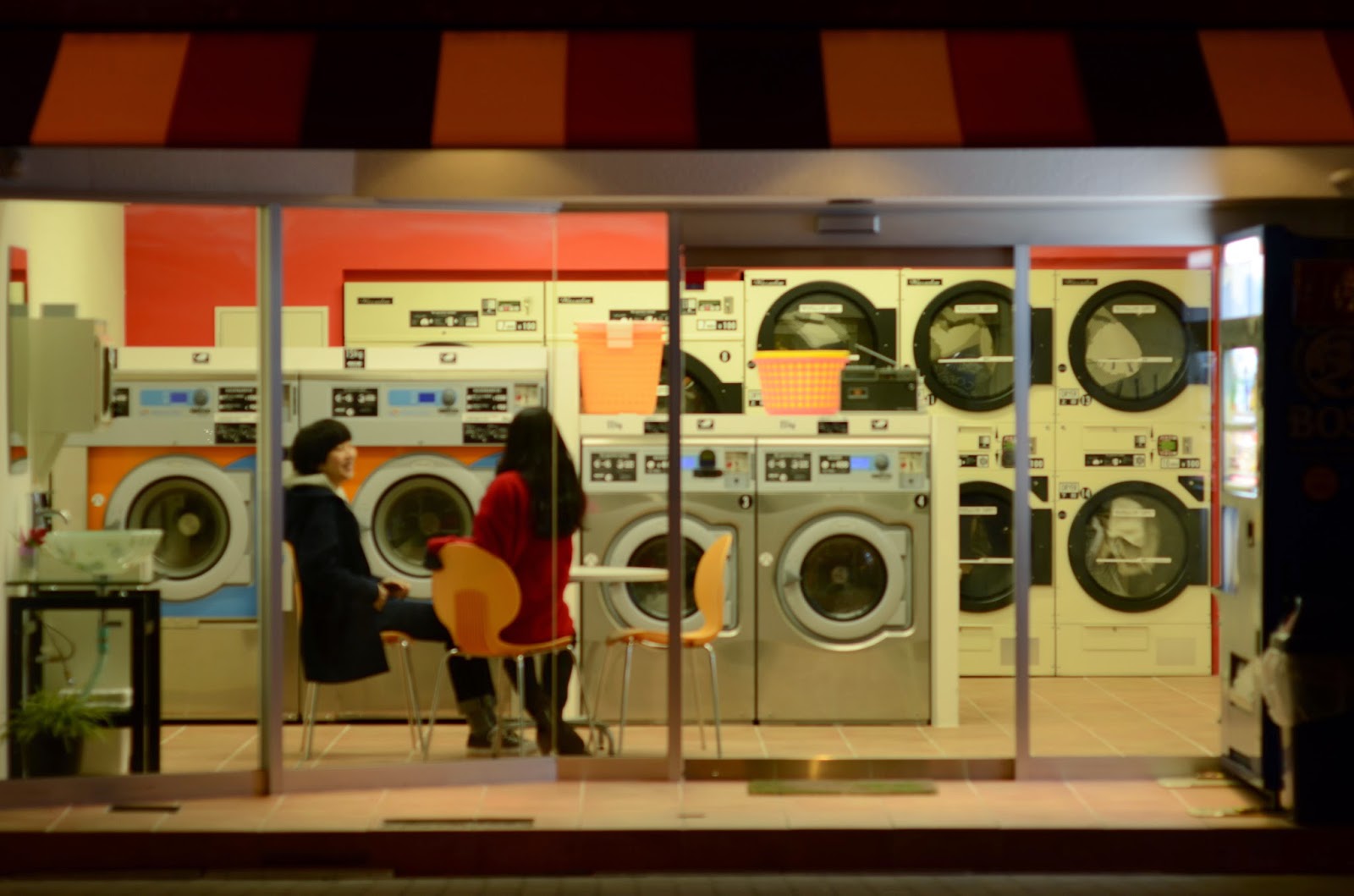 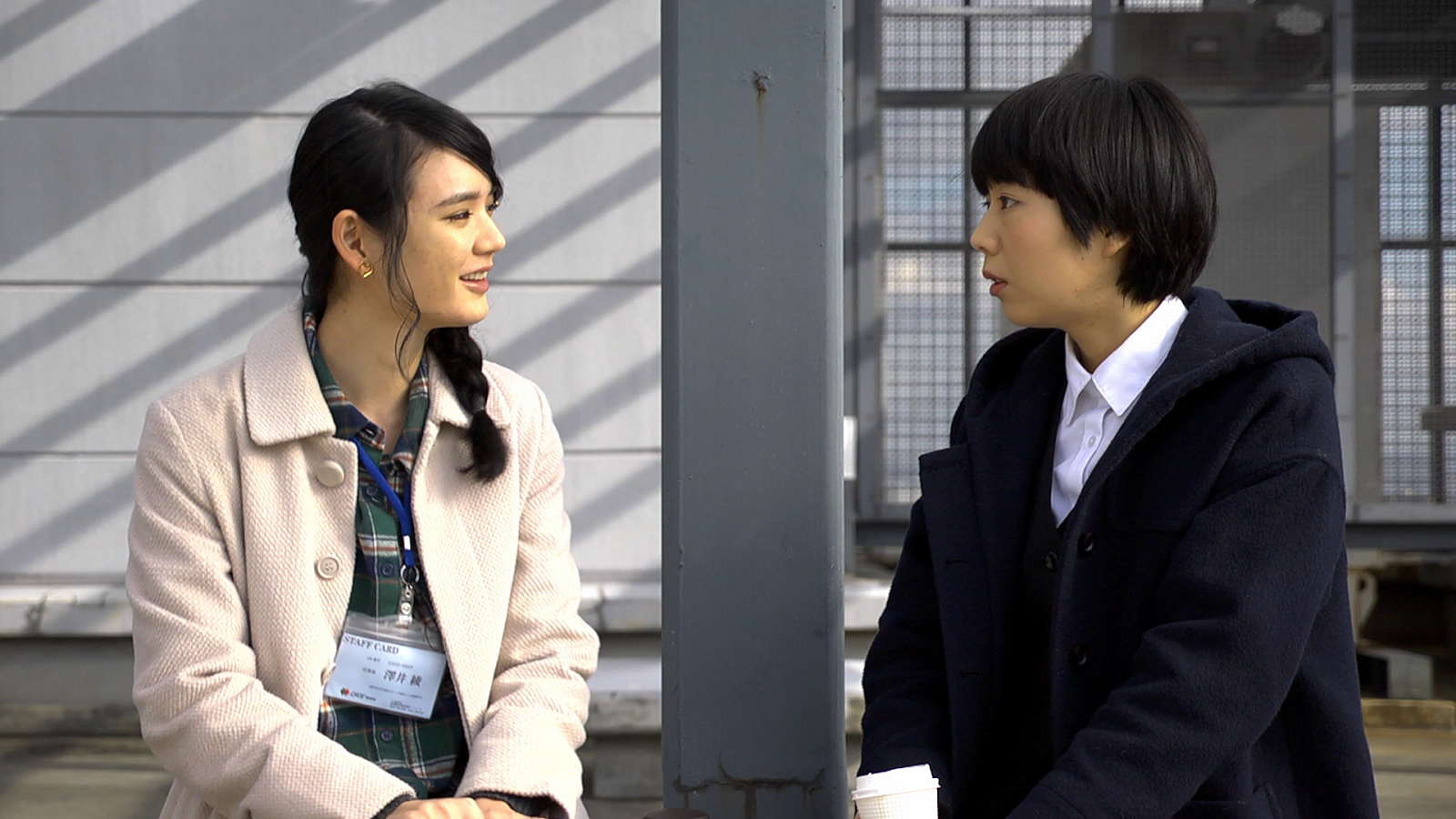 antonym/アントニム (noun): word that means the opposite of another word

People often say that opposites attract, and this seems to be the case for Sachiko Fukada (Asami Shibuya/twitter), an office worker who becomes transfixed by a beautiful fellow employee, Aya Sawai (Yuri Ishizaka), who she encounters in a staff washroom.  The two women appear to be the complete opposites of one another.  Shy Sachiko is plain and unadorned.  Even when not wearing her dull office uniform, she dresses in nondescript clothing.  In contrast, Aya wears a bright red jacket and takes a great deal of care with her appearance, touching up her make-up in the washroom mirror and wearing her hair long.  She exudes the kind of haughtiness one associates with the cliquey “cool” girls in high school.

However, appearance can be deceiving.  While Aya may appear confident in herself, she is actually masking a lot of insecurities.  Her night class writing teacher calls her out on it when he selects her radio drama “antonym” to be produced for air.  Rather than complimenting her on her writing, he tells her that the script is terrible and accuses her of seeing the world with blinkers on: “You think the world is yours, don’t you?  You only think of yourself.  No others exist.”  He wants to pair her up with a co-writer to teach her a lesson, but she digs in her heels at the thought of losing complete control over her work.  She lies and says she has a manga-ka friend who can help her, and her teacher calls her bluff, insisting she bring this friend to their next chat. 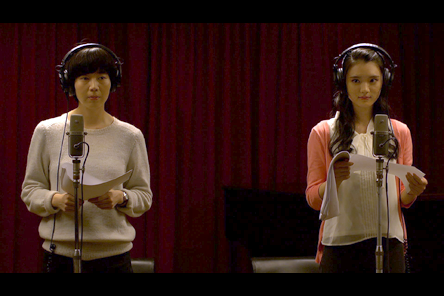 Desperate to have her radio drama produced, Aya decides to use her new acquaitance, Sachiko, to deceive her writing teacher.  She asks Sachiko to pretend to be her manga-ka friend, thinking that she can manipulate the situation, but Sachiko is not as meek and simple as she outwardly seems.  The conflicting options and behaviour of the two women concerning the script and their relationship to one another triggers the façades they both hide behind to crumble, revealing that they may have more in common than they realize.

First time feature filmmaker Natsuka Kusano, has constructed a carefully considered narrative that puts a magnifying glass on relationships between women. Although the film is set in Osaka, thanks to a grant by the Cineastes Osaka Project CO2 (see: OAFF2014), it really could be set in any urban environment.  The film captures the loneliness of modern life against the cold lights of the city.  Most poignant is the scene in which Sachiko sits alone in the coin laundry staring at the washing machine as it cleans the shirt lent to her by Aya.  It’s a cool reminder that many of us spend more time conversing with machines than we do with other human beings.

The climax of the film is very unusual in its stillness.  We witness Aya and Sachiko performing the radio drama in the studio.  In this minimalist environment we are obliged to concentrate on the words the women are saying and the feeling they instil in their words: “I want to be the same like you.  Even the faults, scars, pains, madness.  If there is a big hole on your body, I want to make the same [-sized] hole on the same place [on] my body.”  It is an inward looking film that delves deep into the conflicting emotions of envy, love, desire, ambition, and self-loathing that many people are confronted with daily.

Natsuka Kusano (草野なつか, b. 1985) is from Yamato, Kanagawa Prefecture.  During her Creative Writing studies at Tokai University, Kusano took a class by film critic Sadao Yamane which kindled her interest in film.  Upon graduation, she studied filmmaking at the Film School of Tokyo, and participated in some independent films as production manager and other positions.  Antonym is her first feature film and was made possible by a grant by the Cineastes Osaka Project CO2 (see: OAFF2014).  Kusano is currently based in Tokyo.