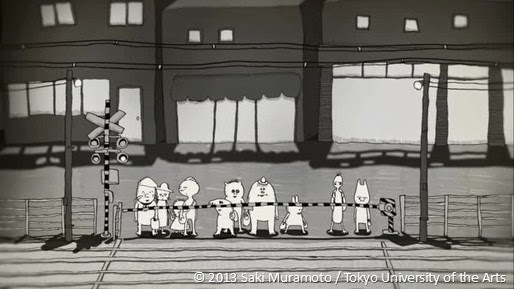 At 5 o’clock in the evening in most Japanese towns and cities loudspeakers blast out a short melody.  This is the cue for children that it’s time to go home for supper – although, as Alice Gordener explains in The Japan Times and on her blog (complete with sample melodies), it’s main function is actually as the daily test for Japan’s emergency warning system.  In It’s Time for Supper (夜ごはんの時刻/Yorugohan no jikoku, 2013), animator Saki Muramoto depicts the time between when the chimes ring, so to speak, and suppertime.

Using a monochrome grey colour palette to illustrate the look and feel of dusk, the film opens with children in a circle playing leapfrog (in Japanese馬跳び / umatobi, IE. "horseleaping”).  Their play is interrupted by the gentle 5 o’clock melody and the children – round, animal-like humanoids – line up patiently at the water fountain for their turn to wash their hands (Japanese play grounds always have a water fountain for drinking, with a tap on the side for washing).

With the shadows growing longer, the children depart the playground to go on their various routes home, and we are treated to a series of vignettes that depict the kinds of things people encounter at dusk in urban Japan.  A man waits at a bus stop feeding birds crumbs, when one of the children glides through on his scooter causing the birds to fly away.   A parent and child come home from a supermarket with their bags piled so high that they cannot see where they are going and others have to negotiate their way around them.  A parent holds hands with four children of descending height at a bus stop and the kids try to jump over the shadows of passing vehicles.  A group of kids get stuck waiting at a train crossing.  The kid on the scooter encounters a dog tied up outside a shop, impatiently waiting for his owner to come out.

The film cuts between these and other vignettes, painting a picture of the daily habits of this typical urban neighbourhood.  It’s a snapshot of a Japanese city at dusk and viewers will smile with recognition of things that they themselves regularly do or witness at that time of day.  There is a lovely added touch of a group of snails next to a jidō-hanbaiki (自動販売機 / vending machine) preparing the night as well – a small reminder that the natural world also tries to fit in to this manmade environment.  It’s a lovely, observant little film and has screened widely at festivals, including making the Jury Selection for the 17th Japan Media Arts Festival (2013).

Saki Muramoto (村本咲, b. 1988) was born in Shizuoka.  She did her undergraduate studies in the Department of Visual Media at Nagoya University of Arts and Sciences (2011) and has an MA in Animation from Tokyo University of the Arts (2013).  It’s Time for Supper was her graduate film project.  Learn more about her on her blog.