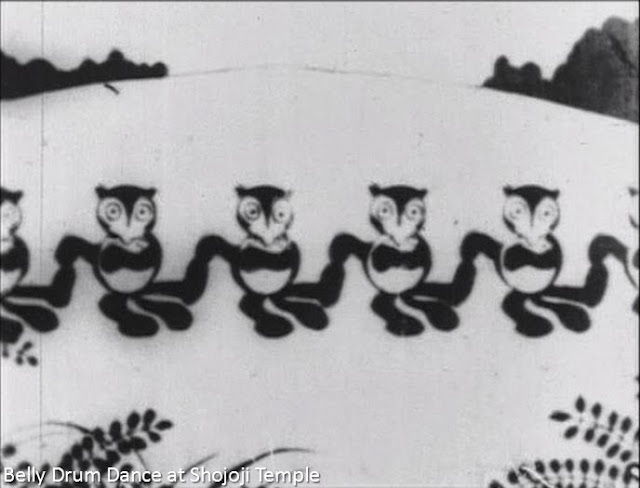 In mid-October every year, local children gather at Shojoji Temple in Kisarazu, Chiba Prefecture to dance and drum on their bellies like the legendary tanuki (racoon dogs).  The legend is of uncertain origin.  It is one of many legends found throughout Japan about the tanuki drumming on their bellies.  The locals say that this particular story of tanuki standing on their hind legs and drumming on their bellies developed from local villagers speculating about the unusual Buddhist music they could here coming from the temple.  The story became widely known in Japan because of the popular children’s song “Belly Drum Dance at Shojoji Temple” (證城寺の狸囃子/Shōjōji no Tanuki-bayashi, 1925). The song began as a poem written by Ujō Noguchi (野口雨情, 1882-1945) in 1919 based upon materials he gathered during a visit that year to Kisarazu.  The composer Shinpei Nakayama (中山晋平, 1887-1952) set the poem to music in 1925.  (Source: Shōjōji Temple History) 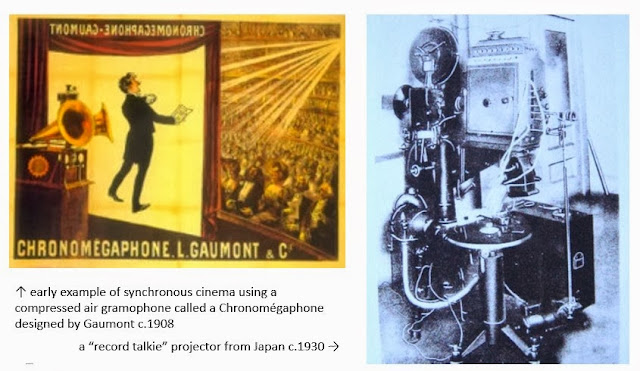 In the early 1930s, animation pioneer Ikuo Ōishi (大石郁雄, 1901-1944) adapted Belly Drum Dance at Shojoji Temple (c.1933) into a “record talkie” for the studio Banno Shōten (伴野商店).  Anyone who is a scholar of early cinema will tell you that the term “silent cinema” is actually a misnomer.  Silent films were never screened silently.  They always had some kind of sound accompaniment such as a piano, an orchestra, a narrator (benshi) and sometimes even recorded sound as in the sound-on-disc technologies such as Gaumont’s Chronomégaphone.  Some of the most delightful films of Japan’s “silent era” are the record talkies (レコードトーキー) that were made in the late 1920s and early 1930s.  The short animated films were a maximum of 3 - 6 minutes long – Belly Drum Dance at Shojoji Temple has a running time of only 1’11” – and were designed to be played synchronously with gramophone records.  They often involve read-along text (The Village Festival and Song of Spring) and dancing characters.  The record talkies are an early example of the now ubiquitous “film tie-in” because people who enjoyed the film could also buy the SP record.

Sho-Sho-Shojoji, in the garden of Shojoji!
The moon, the moon is out!  Everyone, come out!
We’re all friends!  Friends, drum your belly!
Pom poko pon no pon!

Never! Never! Don’t let the monk beat you!
Come, come! Gather around!
Everyone, come out!

Sho-Sho-Shojoji, the bush clovers of Shojoji!
Look!  Look at the flowers in the moonlight!
We’re so excited!  Friends, drum your belly!
Pom poko pon no pon! 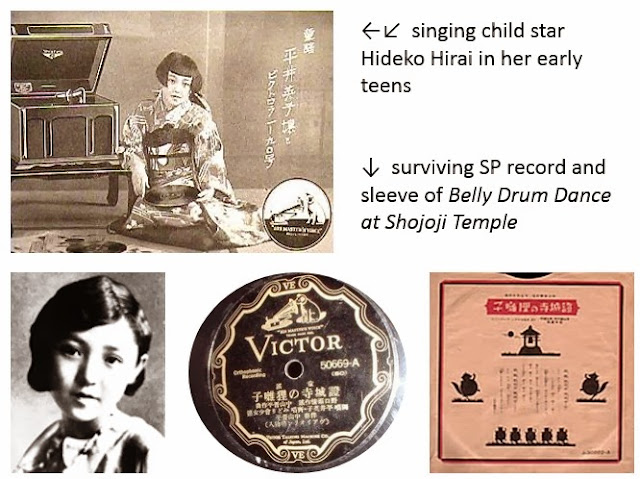 The sound recording was produced by Victor Records (ビクターレコード), a subsidiary of the American company whose Japanese branch (known today as JVC) formed in Yokohama in 1927 but severed ties with its parent company during the Second World War.  The recording features the voice of child star Hideko Hirai (平井英子, b.1918) – a popular singer who also sang Black Cat and Chameko’s Day.  The title screen introduces the animation as a “baby talkie” (ベビートーキー).   A “baby talkie” was actually a kind of gramophone crossed with a Zoetrope that appeared in Japan in the late 1920s as a kind of “home talking picture experience” (source: FIAF Symposium 2007).  You could watch an animation loop as your phonograph record plays.  I am not sure what the connection is to Oishi’s animation, but it is definitely something I plan to look into the next time I’m at the NFC. 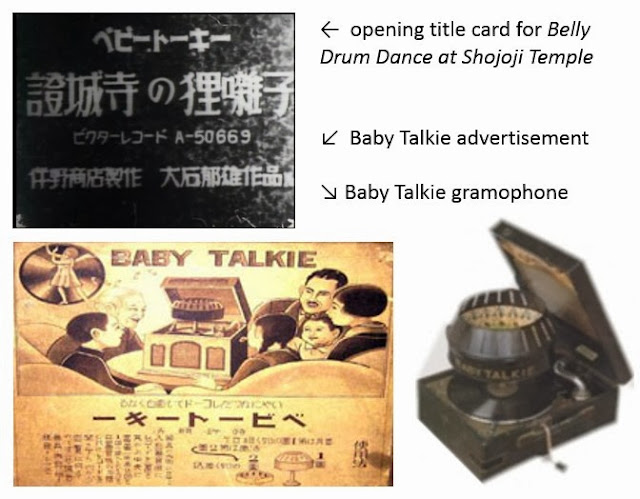 Like the song itself, the animation is simple and repetitive.  In addition to the sweet, cheerful voice of Hideko Hirai, the song is orchestrated with a piano and other percussion instruments.  First a lone tanuki dances and drums on his belly.  He is then joined by more tanuki who join in the dancing and drumming.  As the song progresses, the tanuki continue to multiply and make patterns with each other as they dance.  There is a brief cutaway to the silhouette of a Buddhist monk drumming in the window of the temple – an allusion to the legend that the tanuki were inspired by the music of the monks of Shojoji Temple.  The short short ends with an iris out to an "owari" (the end) title card. 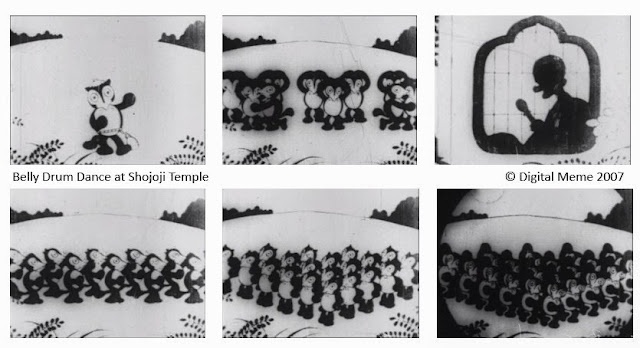 The song is short and sweet, but very catchy.  Here is some sheet music if you would like to sing along or play it yourself.  Fans of anime will recognize the “Pom poko pon no pon!” refrain from the Studio Ghibli film Pom Poko (Isao Takahata, 1994) about tanuki in the Tama Hills fighting urban sprawl.  The “pom poko” in the title is a direct reference to the song “Belly Drum Dance at Shojoji Temple” and the song is sung, with new lyrics, at times of celebration in the film.  Just a cursory web search turns up many more shorts inspired by the song.  This simply executed animation even uses very similar imagery to Oishi’s film including an almost identical silhouette of a monk beating a drum.

Note 2:  Hideko Hirai's name is credited as "Eiko Hirai" on the Digital Meme DVDs.  Although this is a logical error to make, her given name is actually read "Hideko".  Remarkably, she still seems to be alive at the ripe old age of 95.  Trivia:  Hirai retired from singing after her marriage to the composer Seiichi Suzuki (1901-80), who composed the soundtracks to many films including Akira Kurosawa's Sanshiro Sugata (1943)