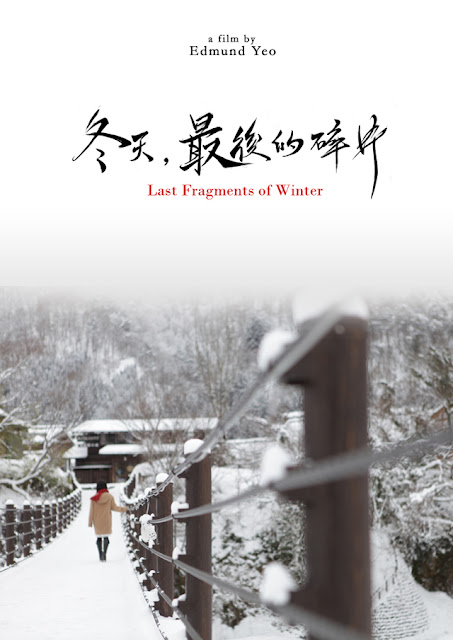 Memory can be such a fleeting thing, often taking the form of fragments of images, sounds, tastes, and smells.  Tokyo-based filmmaker Edmund Yeo’s latest short film Last Fragments of Winter (冬の断片/Fuyu no danpen, 2011) is an assemblage of just such snatches of memory.  It is beautifully shot and poetically arranged in a non-linear fashion.

As the film opens, it is not quite clear whose story is being told and what the relationship is between the wintery traditional village of Shinagawa-go in Japan and the urban and rural landscapes of Malaysia.  Gradually, scene by scene, the characters and story begin to reveal themselves.  Before long it becomes apparent that these fragments of memory belong not just to one person but to three members of the same family: a mother, a father, and their young son.  In spite of their youth, all three have had to deal with a world of troubles and sorrows.

The father (Berg Lee) attends the Buddhist funeral of a former lover and speaks to her ghost, the young son (Foo Kang Chen) is sent on an errand in place of his absent sister, and the mother (Tan Ley Teng) struggles with a mysterious illness that is making her progressively weaker.  The mother has a passion for photography which dates back to her youth.  As a young woman (played by Arisa Koike in the flashback sequences) visiting Japan, she quietly walks around the village of Shinagawa-go as though she is loathe to disturb its tranquility. The only sounds are the chatter of the hiyodori (brown-eared bulbuls), the cry of a distant jungle crow, the crunch of the snow beneath her feet and the click of the shutter on her Mamiya camera.  This scene is paralleled with a similarly idyllic outing she takes later in life with her young son to photograph a rice patty field in her native Malaysia.  The woman’s desire to record the world around her evokes the theme of the ephemerality of life on earth.

In collaboration with cinematographers Kong Pahurak and Tan Teckzee, Edmund Yeo has put together a hauntingly beautiful film.  From the greens and blues of the family’s Malaysian apartment to the white and black of rural Japan in winter, each scene has been carefully crafted to create just the right tone.  There is an other-worldliness to the scenes of Arisa Koike in the snow  that suggest that this may not just be the youthful memories of the mother but an eternal place where weary souls may go to rest.

The story was inspired by a short story called “The Moon” by celebrated writer Mieko Kanai.  Kanai seems an ideal choice for adaptation as her stories are highly visual in nature.  Yeo has managed to capture the dream-like quality of a Kanai story while adding unique elements from his own personal experiences.  The film won Yeo an award at the recent Sapporo Short Film Fest (learn more) and has also played at festivals in Dubai and Nara.  Keep an eye out on Yeo’s official website for information about future screenings.

This is the latest in a series of reviews of the short films of the award-winning Malaysian filmmaker Edmund Yeo (b. Singapore, 1984).  A graduate of Murdoch University in Australia, Yeo has been based in Tokyo since 2008 when he moved there to pursue a Master’s degree at Waseda.  His films have received wide acclaim at international festivals including Cannes, Pusan, and Rotterdam.  Click on the film titles below to learn about his other works.

Posted by Cathy Munroe Hotes at 6:30 am