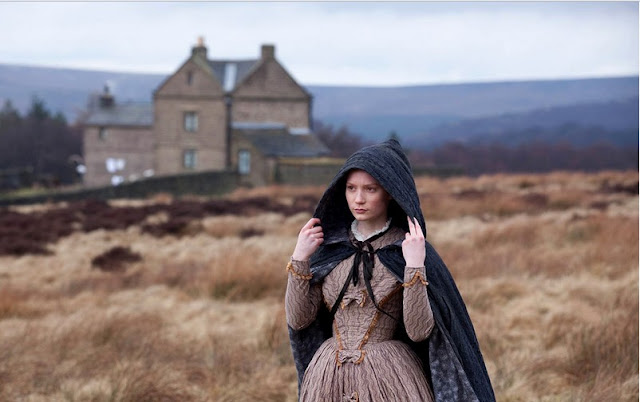 Charlotte Brontë’s Gothic romance Jane Eyre (1847) presents many challenges to a screenwriter looking to adapt the story into a film.  Not only is one burdened with the usual pressures remaining faithful to the characters and flavour of the novel while creating a new work, but Jane Eyre has been adapted dozens of times to film, radio, television, and the stage.   From the 1943 classic Hollywood adaptation starring Orson Welles and Joan Fontaine with its impressive score by Bernard Herrmann to the much loved BBC adaptations such as in the 1983 version with Timothy Dalton and Zelah Clarke, it has been done well so many times that it is a challenge to find a new angle to take with the story.

When I heard that Cary Jōji Fukunaga had taken on the challenge, I was both excited – surely the director of an impressive debut feature like Sin Nombre (2009) could bring something new and refreshing to Jane Eyre! – and trepidatious.  The trepidation was not only because of the great adaptations mentioned above but also because there have been two solid adaptations in recent memory: Franco Zefferelli’s 1996 version starring William Hurt and Charlotte Gainsbourg and the wonderful 2006 BBC adaptation with Toby Stephens and Ruth Wilson.  That being said, it is rare for even a very good adaptation of Jane Eyre to tick all the right boxes for me.  The biggest pitfalls are: making Jane too plain/boring, making Rochester so temperamental and creepy that one couldn't imagine Jane falling for him, and not exploring the Gothic nature of the story far enough.

Fukunaga’s version manages to avoid all of these pitfalls: Mia Wasikowska, with her expressive eyes, plays Jane as an intelligent young woman who knows her place in society but has just enough backbone to stand up for herself when she feels she is being badly treated.  Michael Fassbinder, who is one of those rare actors  able to transform himself completely into his characters, makes Rochester sympathetic enough for us to understand why Jane learns to love him, while at the same time showing him to be a man conflicted by the miserable cards that life has dealt him. There is also real chemistry between Wasikowka and Fassbinder – a must have when depicting a period where more is said through looks and demeanor than action.  A nod must also be given to the supporting cast – particularly Judi Dench who brings a great deal of warmth to Mrs. Fairfax, and Sally Hawkins who is practically unrecognizable as the horrid Mrs. Reed. This is  the first time that I have seen Hawkins play an unsympathetic character and she really took advantage of the opportunity to show her range as an actress. 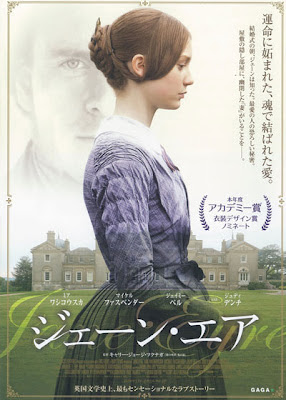 This adaptation easily ranks as one of the best versions of Jane Eyre for two reasons: its use of landscape and its exploitation of the Gothic romance genre.  The moors play such an important role in setting atmosphere in the novel and this is the first adaptation that I felt really got the fact that the landscape like another character in the story.  Shot in the Hathersage moors (not quite Haworth moor but one probably couldn't shoot there without tourists getting in the way), Fukunaga and cinematographer Adriano Goldman really capture the connection between the landscape and the character of Jane.

The cinematography was also a key element of the Gothic look of the piece.  Being "Gothic" is not just about finding the right castle –  it is also about capturing the romance and suspense of a Gothic novel.  The interior scenes set at night in this adaptation make great use of dark and light.  This was a time where rooms would have only been lit by fireplaces, candles, and Paraffin lamps (aka Kerosene lamps in North America).  The lighting in these scenes not only captures the historical reality but the shadow also adds to the general suspense.  The scenes where Jane hears noises but does yet know what their source is are so expertly done that I found myself on the edge of my seat even though I knew exactly what was going to happen.  Many adaptations concentrate so strongly on building the character of Jane that they forget that the story belongs to the Gothic romance genre.  The dash of Hitchcock added to the mix made Fukunaga’s Jane Eyre well worth the price of admission.

Cary Jōji Fukunaga is a Japanese-Swedish American director.  His debut feature film Sin Nombre (2009) won him much acclaim including the directing award at the Sundance Film Festival.  Warner Brothers has signed him up to adapt Stephen King’s It in two parts with Chase Palmer writing the screenplay. See The Hollywood Reporter for more details.
Posted by Cathy Munroe Hotes at 5:54 pm