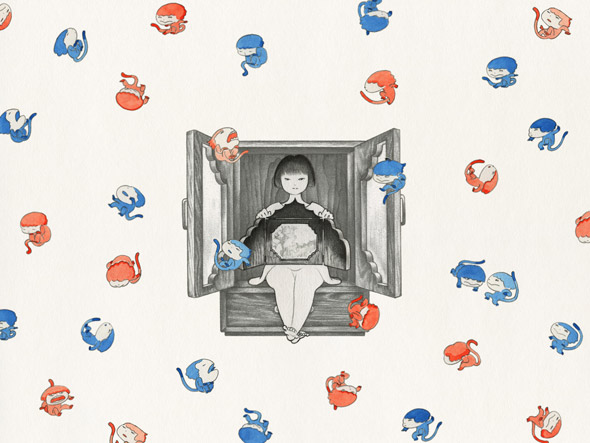 At Nippon Connection 2012, we had the rare opportunity to see the latest animated short by the artist Akino Kondoh.  It took Kondoh more than a year to complete Kiya Kiya (2010-2011), which is remarkable considering that each frame of an Akino Kondoh animation is as highly detailed as her paintings and illustrations.  Kiya Kiya film is about six-and-a-half minutes long with Kondoh creating 15 frames per second.

Eiko, the bob-haired girl with the beguiling smile, sits in a cabinet with a kamishibai (紙芝居) on her lap.  Kamishibai, which translates as “paper drama,” is a traditional form of storytelling that dates back to 12th century.  It underwent a revival in Japan in the early part of the 20th century when kamishibai storytellers (gaito kamishibaiya) would bicycle from village to village with their portable wooden display boxes.  Today in Japan, kamishibai sets are often used in schools in lieu of storybooks as they are easier for storytelling to an audience.  The pictures are on the front of the large cards and the text is on the back for the storyteller to read. 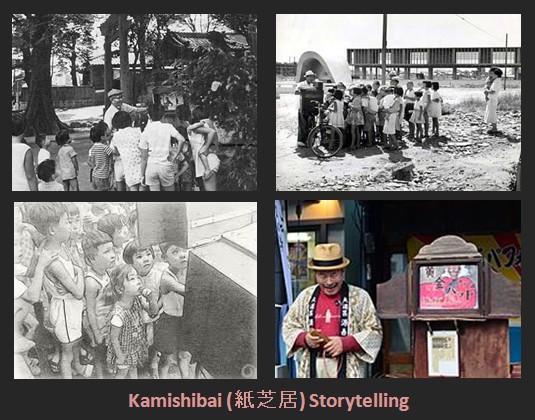 In Kiya Kiya, Eiko is the storyteller.  As she changes the pictures in her kamishibai, her lips move and instead of hearing her words, cursive script begins to appear in columns as if written by a calligrapher’s hand in the traditional direction of top to bottom, right to left.  At first it appears to be hiragana (the cursive Japanese syllabary which Japanese children today learn first), but is actually illegible.  In an interview, Kondoh explains that she made the script by combining parts of hiragana with four letters from the Latin alphabet.

The illegibility of the text works on two levels in the film.  The first is that it gives the impression of text without allowing words to distract from the animation itself – which is what Kondoh herself has stated as her intention in the aforementioned interview.  The ambiguity of the text is heightened when it metamorphoses into shapes, and then into playful little tailed creatures in blue and red.

The indecipherable text also adds to the elusive character of Eiko herself.  Eiko is a kind of trickster character.  In one moment she charms with her smile, while in the next moment she shocks with a cruel or disturbing act.  The stark blacks and whites of Kondoh’s colour palette also highlight the dual nature of Eiko.  In Kiya Kiya, two more colours are added: red and blue.  In the third section of the film Eiko splits into two and a red Eiko and a blue Eiko chase each other and embrace each other like two kittens at play.  This sequence recalls Kondoh’s earlier animated film Ladybirds’ Requiem (てんとう虫のおとむらい, 2005-2006) which features a sequence in which a red ladybird (or “ladybug” in North American English) with black spots and a black ladybird with red spots embrace and spin around together. 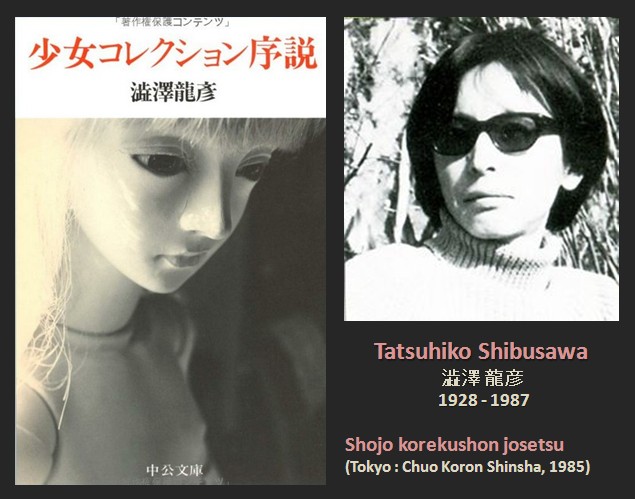 Kiya Kiya is divided into three sections which are indicated by the insertion of title cards.  There is also a short introductory sequence and an upside-down title card before the end credits begin.  When I first heard the title of this film, I thought that “kiya kiya” might be an obscure onomatopoeia (sound word) for the sound made by one of the wonderful insects Akino Kondoh likes to use in her works.  It turns out that the title comes from an archaic expression that Kondoh found in Shojo korekushon josetsu (1985), a collection of short stories about girls by Tatsuhiko Shibusawa – a writer, critic, and translator of French literature (including Jean Cocteau and de Sade) who was close friends with Yukio Mishima.  In the glossary of the Shojo korekushon josetsu, Kondoh came across the expression “mune ga kiya kiya suru” (胸がきやきやする/a “kiya kiya” in one’s chest) which was translated as “a keen feeling experienced after an episode of déjà vu hat is unsettling and disturbing yet also familiar” (source).

The Japanese language is rich with onomatopoeia which not only mimic sounds (giseigo) but also can describe actions or feelings (gitaigo).  For example, the giseigo “doki doki” is the onomatopoeia for the sound of a beating heart, but when it is turned into a verb “doki doki suru” it is used to describe the feelings one has when one’s heart is racing – such as nervousness or excitement.  “Kiya kiya” may have also at some point have had a sound associated with it, but Kondoh seems to have been drawn to the expression “mune ga kiya kiya suru” because it expresses the feeling of unease mixed with nostalgia that she expresses in her work.

This feeling of unease is amplified in Kiya Kiya by the soundtrack which was composed by the American avant-garde artist John Zorn – for whom Kondoh designed the album cover of The Goddess: Music for the Ancient Days (2010).  The soundtrack is predominantly high female voices and percussive instruments.  Like the images, the music repeats motifs - sometimes so much so that it sounds like a skipping record.  Repetitive images build throughout the film: Eiko lying as if dead in the overturned cabinet, Eiko being strangled by the branches of a tree, Eiko catching the tailed creatures in her hands like she did the ladybirds in Ladybirds’ Requiem.  The images build and build until finally Eiko stretches out naked on her back on a branch over a precipice and she smiles up at us inviting us to both admire and fear her beauty. 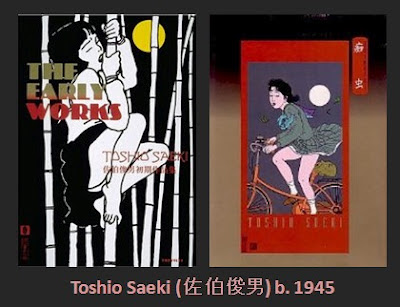 Akino Kondoh art comes out of the traditions of alternative manga (Garo, Ax).  In particular, she cites the controversial artist Toshio Saeki as an influence (source).  However, unlike the more exploitative and voyeuristic view of women in Saeki’s work, Kondoh’s work is an exploration of the self.  Eiko is the artist’s alter ego, developed out of Kondoh’s own, often disturbing, childhood memories.  Eiko’s trickster nature means she is hard to pin down, sometimes appearing as a girl while at other times a young woman, sometimes she seems to be the victim, while at other times she is the perpetrator.  Innocent and knowing, kind and cruel, drawing us in and pushing us away – Eiko both seduces and unnerves with her unusual charms.

To learn more about Akino Kondoh and Kiya Kiya, check out: