The Modern Films of Mirai Mizue 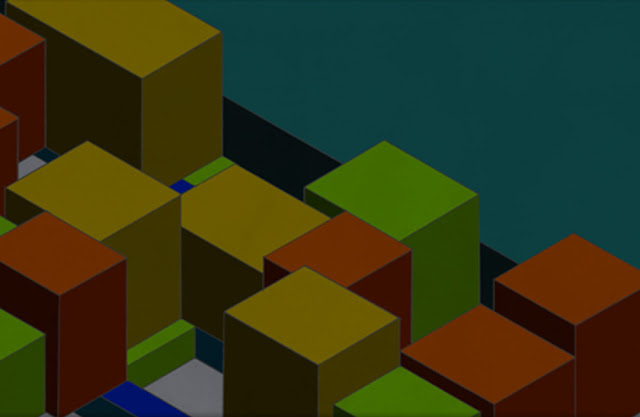 The innovative experimental artist Mirai Mizue often takes a scientific approach to animation.  With each new film or film series, he challenges his discipline as an artist (take his current Wonder 365 Animation Project where he aims to make animation every day for a whole year) and investigates the theoretical possibilities of his craft.

Modern (2010) and Modern No. 2 (2011) further explore the method of geometric animation which Mizue used for the first time in Metropolis (2009).  These films are made using isometric drawings planned out on graph paper, and are inspired by optical illusions such as the graphic art of M.C. Escher.

In the “Making Of” extra on the DVD Mirai Mizue Works 2003-2010, Mizue explains that for Modern, he set himself the rule that he could only use three kinds of lines: one vertical and two slanting.  Thus the film consists only of the transformation of rectangular parallelepipeds.  Mizue was interested in making as interesting a film as possible using a minimal number of elements in order to prove the theory that animation can be very good when one imposes a limitation on movements.  It would be very easy, and much less time consuming, to make films like Modern and Modern No. 2 using CG software but the look and feel of the film would be very different.  There is a warmth and tactility to Mizue’s films that would be lost if the lines were computer generated.

Modern and Modern No. 2 have a lot of visual similarities in terms of graphic style, but they are at the same time quite distinct from one another.  Modern begins completely in grey scale then the shapes take on bright colours that stand out against the foggy grey background and the whole frame outlined by a soft black outline.  The rhythm is much slower in Modern than in Modern No. 2 because Mizue asked his composer, twoth, to increase the tempo.  Modern also had a much more consistent tempo, whereas with Modern No. 2 Mizue experiments with variations in speed.

The biggest change with Modern No. 2 is the change in colour.  For his earlier films, Mizue tended to use plain paper, but for Modern No. 2 he uses traditionally made paper with texture.  This creates a wonderful textured effect with the threads of the paper visible and jumping about from frame to frame.  The colour palette for the geometric shapes is inspired by traditional Japanese art – colourful and dynamic yet more muted than in Modern.

It is an exhilarating experience to watch Mirai Mizue’s geometric films.  The precision of movement and the way in which the animation works in together with the soundtrack is truly a wonder to behold.  Modern appears on the DVD Mirai Mizue Works 2003- 2010.  Please support his artist by ordering it today.

Modern and Modern No. 2 screened at:

Posted by Cathy Munroe Hotes at 4:51 am