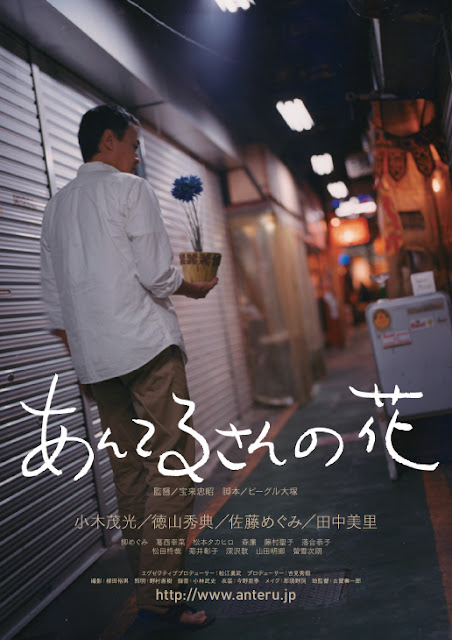 Tonight the 13th Japan FilmFest Hamburg is hosting the world premiere of The Mirage Flower (aka The Mysterious Flower of Anteru / Anteru-san no hana, 2012) directed by up and coming young filmmaker Tadaaki Horai.  The film is set in Kichijōji, a bustling neighbourhood of Musashino city.

Shigemitsu Ogi (Paradise Kiss, Always: Sunset on Third Street 2) plays Teruo Ando, the quiet unassuming proprietor of an izakaya (Japanese-style bar) which he has named using his own nickname “Anteru”.   While doing a guest spot on a local radio station to promote his izakaya, Anteru learns about a mysterious flower from Peru whose petals can cause realistic hallucinations for up to three days.

On his way home, Anteru spots a flower fitting the description at a florist, purchases it on a whim, and takes it back to the izakaya to show his wife Namiko (Misato Tanaka of Bride of Noto).  Namiko suggests that they test the flower’s powers out on three of their regular customers: Kusanagi, a divorcee with a young son; Chisato, a recently signed musician trying to make a name for herself; and Takayuki, a part-time security guard with a meddling little sister.

After having contact with Anteru’s flower, each of the central characters encounters an important figure in their lives – someone who has been haunting their dreams and whose relationship with them is unresolved.  Kusanagi (Hidenori Tokuyama of Slackers 2) is still suffering from the pain of his recent divorce and struggling with being a single father to Shuichi.  The sudden reappearance of his ex-wife (Megumi Sato of Happy Flight) forces him to confront his conflicting feelings towards her.

Chisato (Megumi Yanagi) now considers herself a professional musician on the up-and-up, but her new record producer is pressuring her to change her style in order to become more successful.  After coming in contact with Anteru’s flower, Chisato’s former band mate Naomi (Yukina Kasai) reappears in her life.  Naomi reminds Chisato of her roots as an artist and causes her to question whether or not she has become a sell-out.

Unlike his two friends, Takayuki (Ren Mori) doesn’t seem to have any skeletons in his closest – apart from a troubled relationship with his parents – but he does have secret fantasies about the kind of girl he’d like to meet.  One day while on the job the beautiful girl of his dreams turns up and engages him in conversation.   Remembering his encounter with Anteru’s flower, Takayuki immediately presumes that this girl must be a hallucination.  Real or not, Takayuki is happy to go with the flow for as long as this trip lasts.

The film unfolds in a dream-like fashion with some scenes shot overly bright to add to the ethereal quality.  The multiple plot lines weave in and out of one another in a manner reminiscent of Krzysztof Kieślowski’s Three Colours Trilogy with a colour scheme similar to that of The Double Life of Véronique. The line between what is real and what is hallucination is so thin that we start to realize that even the envelope story of Anteru and his wife may not be all that it seems.  The references to Hans Christian Andersen remind us that this is not a realistic story but a more of a fable about life.   It is a film about unfinished business and second chances, not to mention love, loss and forgiveness.

The Mirage Flower will be released in Japan on the 16th of June at the Baus Theatre.  For more information, check out the film’s official website or the website of the production company Musashino Eiga.