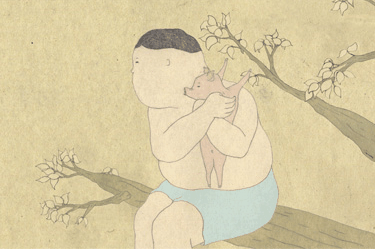 A giant pig lies in an ordinary garden, blocking the door to the house.  The house is occupied by a large and unusual family: wife, husband, grandmother, and six nearly identical chubby boys.  The atmosphere inside the house is dark and oppressive: the balding, middle-aged husband slices deli meat, decorating his body with the slices while the wife tries to push granny up the stairs while chewing on snacks she keeps in her apron.  Life in the garden seems more carefree: a boy embraces a piglet in the branches of a tree, another boy is blown in a series of gentle front tucks by air blown through, a boy swings like an acrobat from the tree, while another pretends to fish from the rooftop.  The repetitive activities of everyday life come to an end with the wail of the town siren.  The family makes a circle around the giant pig and do a kind of ritualized dance. Is this all real life or just a dream?

In a Pig's Eye (Wakaranai buta, 2010) is independent animator Atsushi Wada’s graduation film from the graduate animation programme at Tokyo University of the Arts.   With In a Pig’s Eye, Wada continues his exploration of the artistic concept of “ma” or the “spaces in between.”  As with his earlier works, the animation is drawn frame by frame using pencil on paper, with subtle colours added during the computer editing process.  Compared to his earlier work, this film has a wonderful sepia hue to it that recalls traditional paintings done on scroll paper.

The film revisits many themes and motifs typical of an Atsushi Wada film: subtle character movements, domestic animals (in this case pigs and a dog), chubby boys, and repetition of movement.  The dreary everyday chores of life depicted inside the house are in stark contrast to the more carefree play outside, yet the film as a whole depicts both the tedium and absurdity of ordinary day-to-day life.  For me the giant pig in the garden symbolizes the types of inexplicable curveballs life sometimes throws at us.  You can allow it to trap you (like the boy trying and failing to leave the house), or you can make the best of it and discover something really wonderful (the boy being blown into the air by the pig).

When I have been at screenings of Atsushi Wada’s earlier films – particularly Manipulated Man (2006) and Day of Nose (2005) – audiences have tended to be quite silent either with wonder or with incredulity.  Mechanism of Spring (2010) and In a Pig’s Eye are the first Wada films where I actually felt the audiences engage in a warm way with his art.  In fact, In a Pig’s Eye has some slapstick elements (door slamming into pig; boy suddenly falling; etc.) that made me laugh out loud at the absurdity of it all.  Thus I was surprised to learn from Wada, that the films were made with only aesthetics and not comedy in mind.  At the Filmmaker's Talk that I hosted at Nippon Connection 2012, Wada revealed that he had been quite shocked the first time he attended a screening of one of his films at an international festival (it was at VIFF) to hear the audience laughing out loud at his film.

Wada reminded me that film audiences in Japan do not make any noise while watching a screening (they don’t even scream during horror films!), so he cannot tell if Japanese audiences find his films amusing or not.  Western audiences are not shy about expressing genuine emotion during a screening, and the reaction to In a Pig’s Eye at festivals has been largely positive.  The film has won several awards including Best Film at Fantoche in 2010 and the Prix DeVarti for the funniest film at the Ann Arbor Film Festival 2011.


When Wada was speaking to me about his films I was reminded of Luigi Pirandello's absurdist meta-theatrical play Six Characters in Search of an Author (1921) and theories about authorial intention.  A creator of art obviously wishes for their creation to be well received by spectators, but once an artwork is created it takes on a life of its own.  Although audiences may not be receiving the work in the way that Wada intended, it is surely a wonderful thing that the film has taken on a life of its own and delighted audiences around the world.


Each frame of a Wada film is a work of art in itself.  During the Filmmaker's Talk I asked him about whether or not he preferred working with film or digitally (he had to use 8mm film for Concerning the Rotation of a Child (2004) when he was a student at Image Forum).  Wada prefers making his films digitally because he draws such fine lines using a mechanical pencil.  These fine lines are more difficult to capture with film, so digitally scanning the images gives him a much better result.


Wada explains more about his technique on the CALF DVD Atsushi Wada Works 2002-2010 which also includes In a Pig's Eye.
Catherine Munroe Hotes 2012