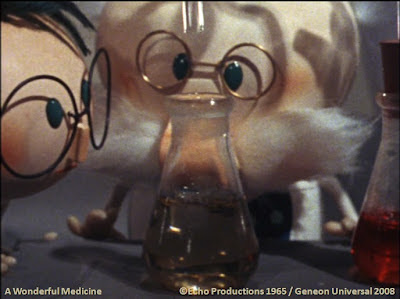 This 15-minute stop motion animation is an important landmark in Japanese animation history.  A Wonderful Medicine (ふしぎなくすり, 1965) is the first independent film by Tadanari Okamoto (岡本忠成, 1932-90) after he founded his own studio Echo Productions (Echo Kabushiki-gaisha) in 1964.  It is also the first stop motion / puppet animation to win the Noburo Ofuji Award, which for 1965 was jointly awarded to Okamoto and experimental animation pioneer Yōji Kuri.  Okamoto was to go on to win this prestigious award more times than any other animator.

A Wonderful Medicine is an adaptation of the short-short story Nusunda Shorui (盗んだ書類) by novelist Shinichi Hoshi (1926-1997), acclaimed for his “short-short” science fiction stories – many of which were illustrated by another Ofuji award-winning animator Makoto Wada and one of Kuri’s fellow Animation Sannin no Kai members Hiroshi Manabe.  Short-short stories belong to the genre flash fiction, and as such tend to be not only short but also boast fresh, innovative storylines and unexpected endings.

In an opening reminiscent of To Catch a Thief (Alfred Hitchcock, 1955), an open top convertible winds its way up a coastal hill to a lookout point.  But instead of Cary Gant and Grace Kelly, the car holds a tall, skinny, evil genius with a Poirot moustache and his short, checked-cap-wearing lackey.  The two men are targeting a moustachioed elderly scientist who quirkily has a boy assistant and a talking crow.

Posing as a potential customer, the evil genius spies on the scientist and overhears him making a new discovery.  Believing this new “wonderful medicine” to be something useful for his plans for world domination, the evil genius and his lackey plan a bold mission to steal the “wonderful medicine.”  Comical at every turn, they are almost foiled by the alarm systems and the talking crow, but in the end their cunning allows them make off with their prize.  In a hilarious twist at the end (spoiler alert), the lackey – who is coerced into being the guinea pig – takes some of the “wonderful medicine” which turns out to be a cure for turning a wicked heart into a good and wholesome heart.  Overcome by his new-found sense of morally upstanding principles, the lackey confesses his crime to the scientist, who is delighted to learn that his new medicine works as intended.

Compared to Okamoto’s graduate work Mirror (1960), one can see an improvement in the fluidity of character movement and general expressiveness of the characters – skills which Okamoto acquired during his period working under Tadahito Mochinaga at MOM Productions.  In an amusing touch, the scientist and the evil genius, whose mouths cannot be seen, both talk via their moustaches going up and down.  The establishing shots, both exterior and interior, set the scene beautifully.  The most innovative sequences occur when the crow tries desperately to prevent the thieves from taking the medicine.  Scribbles and even foam have been overlaid on top of the scene in order to depict the chaos of the fight in a dynamic fashion – I am guessing that as with Eastern European puppet films of this period (hugely influential on Okamoto throughout his career), and indeed as with Kihachirō Kawamoto’s early puppet films, this film was shot on the horizontal surface of an animation table with the camera looking down from above.  This would have allowed Okamoto to add depth and special effects on plates of glasses placed at different camera distances above the puppets.

A Wonderful Medicine appears on the first DVD of the Collected Works of Tadanari Okamoto (JP only), which I reviewed for Midnight Eye.  This review belongs to my series on the Noburo Ofuji Award.